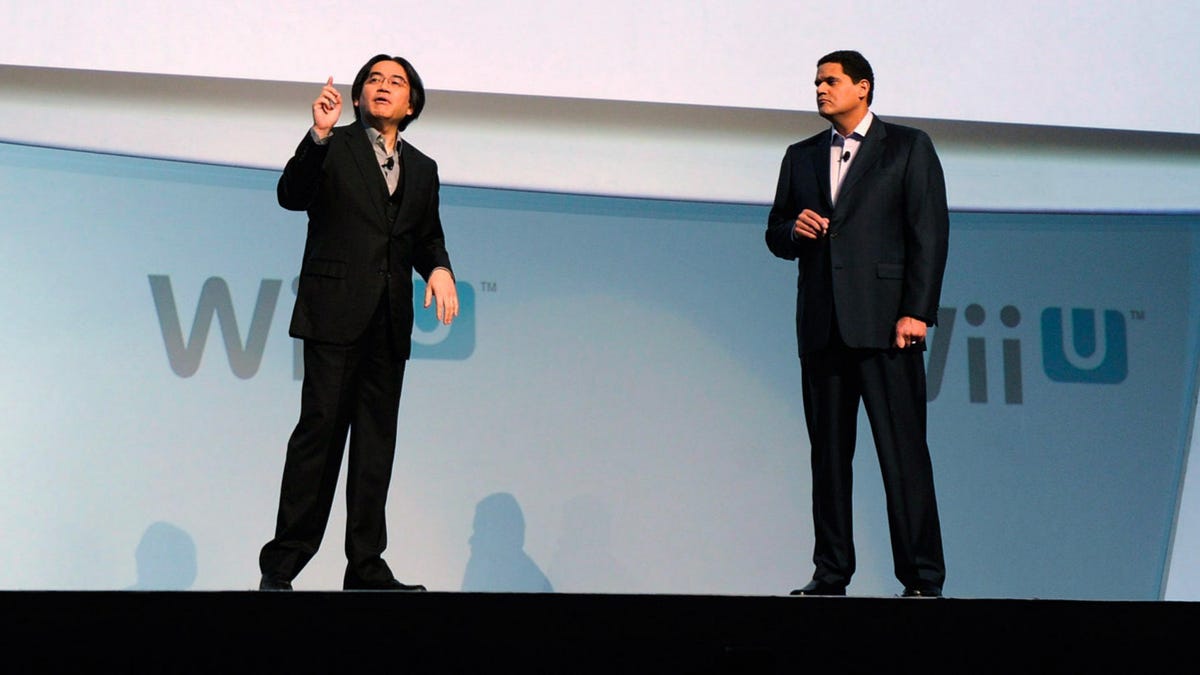 It started with an unheard-of request. Reggie Fils-Aimé wasn’t yet president of Nintendo of America. Heck, he wasn’t even an employee—but rather, interviewing for a job. Yet he wanted to speak with Satoru Iwata.

During the recruiting process, the then-marketing exec realized that he would need a strong working relationship with top brass at the Nintendo Co., Ltd. (NCL) headquarters in Kyoto—the most important of whom was Satoru Iwata, who had taken over as global president in May 2002. So naturally, Reggie asked to have a video conference with him. But that’s not how things were done at Nintendo.

Who does this guy think he is? Iwata has better things to do than meet with Reggie! Similar sentiments echoed throughout the halls of Nintendo in both Kyoto and the U.S. “I found out years later that this had caused major issues at NCL and NOA [Nintendo Of America],” Reggie writes in his newly released business biography, Disrupting the Game: From the Bronx to the Top of Nintendo. In retrospect and now, with his full understanding of Nintendo culture, Reggie can see how this request would be taken as “unconventional” or “maybe even arrogant.”

It’s arguable, though, that it wasn’t really a surprise that Fils-Aimé would make such a request. He wasn’t your typical Nintendo hire. Raised in the Bronx, the Cornell-educated marketing whiz had been shaking up the advertising world.

And Iwata was no run-of-the-mill Japanese exec. He cut his teeth as a programmer on games like Balloon Fight, EarthBound and Kirby. His dev skills were good, but so were his business ones. Iwata’s success in running HAL Laboratory led to him joining Nintendo in corporate planning in 2000. Two years later, he was named president when Hiroshi Yamauchi, who ran the company since 1949, retired.

Maybe it was because Reggie was recruited for an executive role. Maybe Iwata was intrigued. But this unexpected request was not only greenlit, it was also the start of a great friendship.

The video conference was set. Reggie was scheduled to speak with Iwata for half an hour. As he waited for it to begin, Reggie expected the company president to be joined by a translator. But when the monitor flickered on, there was Iwata, alone. “This made the meeting much more intimate, as he controlled the cameras to zoom in and make it appear as if he was just across a table from me,” writes Reggie. “He asked what he should call me. ‘Please Mr. Iwata, just call me Reggie.’”

The two talked about the new gaming systems from Sony and Microsoft, and the conversation went well beyond the planned thirty minutes. Reggie asked what Nintendo was going to do to combat the PlayStation Portable. “Reggie, accept the job and come to Kyoto,” Iwata said. “I will show you how we will continue to innovate.”

Reggie was offered the job and accepted, and came aboard as the executive vice president of sales and marketing. And after eight weeks on the job, he arrived in Kyoto at Nintendo’s HQ in January 2004, to see how the company was innovating. During that trip, he not only met Iwata in-person for the first time, but also spoke to Miyamoto and saw the working DS prototype. This was the beginning of a professional relationship that would include legendary E3 press conferences and ad campaigns. However, it wasn’t until 2006, when Reggie became the president Nintendo of America, that the two became more than game industry professional acquaintances.

“When Mr. Iwata or other NCL executives visited the US, we would often have team-oriented dinners in the evening,” writes Reggie. “These would be great opportunities to better understand one another and share personal stories and experience.” However, when Reggie was in Japan, he wouldn’t typically meet with top Nintendo brass for dinner. “I believe this was because Mr. Iwata himself was a tireless worker, staying in the office until late at night meeting with members of his executive team,” writes Reggie. “They often had simple meals brought in and continued discussing new game development projects well into the evening.”

On one of Reggie’s first trips to Kyoto as the new president of Nintendo of America, that changed. Iwata asked him to join him for dinner—something that Reggie calls a “great honor.” He knew that the Nintendo exec rarely went out to dinner with his staff. Iwata took Reggie to one of Kyoto’s best restaurants, where they dined on exquisitely prepared courses of sashimi, local fish, and seasonal vegetables.

“We shared stories about our childhoods,” writes Reggie. “We laughed as we learned that each of us had read the entire family encyclopedia as young kids.” For Reggie, that meant a twenty-six-volume World Book Encyclopedia set. They talked about their passions and their journey to where they are. It was then that Iwata said something unexpected: “Reggie, you know, we are very much alike.”

“Mr. Iwata, what do you mean?” asked Reggie. Iwata was a world-class game developer and the fourth-ever president of Nintendo. Reggie, in his own words, was a “brash marketer and disruptor.”

“Reggie,” Iwata said, “Nintendo is a company where employees tend to stay for a very long time. But you and I are outsiders.” Sometimes, Nintendo doesn’t merely feel like a very Japanese company, but rather, even more insular. It can feel like a company very specific to Kyoto. For most of its history, it’s been a family business, staffed with local employees from Kyoto or neighboring Osaka. But Iwata hailed from Hokkaido. He didn’t speak the local dialect. He wasn’t a member of the Yamauchi family. Iwata was an outsider, just like Reggie.

“Nintendo is a company where employees tend to stay for a very long time. But you and I are outsiders.”

Continuing, Iwata said that their unique challenge was to understand Nintendo’s culture while, at the same time, pushing the company forward. To do this, it was necessary to listen to the employees to fully understand them. Iwata said it wasn’t only Reggie who had to do this.

“I have to do this too,” said Iwata. “I am trying to push Nintendo in a new way. Yet Mr. Miyamoto and others have been part of the company for a very long time. I need to make sure they are with me as we go on this journey.”

For Reggie, this meal was a turning point. “It was at the conclusion of this dinner that I felt we went from being in a boss/subordinate or mentor/protégé relationship, to being friends,” Reggie writes. “I would incorporate his insights into all my future work—at Nintendo and beyond.”

Satoru Iwata was first diagnosed with cancer in summer 2014. While he was in the hospital during those muggy months, Reggie was scheduled to be in Japan for meetings. He did what any friend would: He asked to visit.

But companies have their own cultures—as do countries. Sometimes it’s important to understand them. Other times it’s necessary to question them, to push at established boundaries.

The two traded emails, but Iwata declined. “No, this just isn’t done in Japan,” he wrote in an email. “Business associates don’t visit the hospital for each other.” Reggie continued to respectfully push for a visit, but Iwata was adamant, writing, “Reggie, no one from the office has come to see me.” But Reggie challenged the idea that this was a business visit, replying, “With all due respect, Mr. Iwata, I want to visit you not as the president of Nintendo of America but as a friend.”

Being an outsider has its advantages. You may break the rules by simply not knowing what they are. Or, by questioning them, you may cause a calcified system to change.

“I’d like to believe my final push elicited that little smile he would give me when he realized that I just wouldn’t take no for an answer,” writes Reggie. “He relented and agreed for me to come visit him in the hospital.”

On the drive to the hospital, Iwata’s then-right-hand-man and now Nintendo president Shuntaro Furukawa pointed out to Reggie how unusual his request had been. But in the wake of his request, something changed. Iwata had even started to allow Nintendo employees in Kyoto to visit him in the hospital.

“Mr. Iwata was excited about my visit,” writes Reggie. Iwata’s wife and daughter would be there, too. “This delighted me, since having his family there would make it even more of a friend’s personal visit versus a businessman’s visit.”

When Reggie entered the hospital room, Iwata was there in a gown, with a big grin on his face. He looked healthy. Reggie did what he always did when meeting Iwata, he extended his hand for a handshake, and the two had a personal conversation about how the Nintendo president was doing. The mood was upbeat and positive. Iwata’s daughter even memorialized the visit by having her photo taken with Reggie.

Just like his desire to speak with Iwata during recruitment, Reggie was pushing the boundaries and challenging norms. Here, it wasn’t for business reasons. It was out of his desire to see his friend.

The following spring, after Iwata seemed to have bounced back and recovered, he wanted Reggie to travel to Kyoto for a specific three-day period. It was a sudden, unusual request. Odder still was that he wanted the Nintendo of America president in the Kyoto headquarters at 8:30 a.m. instead of 9 a.m., when the company’s workday officially began. Reggie walked into the marble lobby early that morning. The office felt cold and sterile. Reggie went up to the seventh floor executive area and at exactly 8:30 a.m., he was shown into Iwata’s office.

“While Mr. Iwata had been the company’s global president for well more than ten years at this point, he had not moved into the formal, large president’s office used by his three predecessors,” Reggie writes. “Instead, he had preferred a simpler office, with his desk at the head of a rectangular-conference room setup that could hold up to twelve additional people.” Besides two large TV screens, Iwata had cabinets full of books, video games, game accessories and controllers. Reggie had always thought that the office looked like it belonged to a game dev instead of the top exec at a global corporation.

The two greeted each other. Only days earlier, Nintendo had announced it was entering the mobile market. But first, Iwata had something more important to talk about. “Reggie,” he said, “my cancer is back.”

“To see his concern, and for him to bring me back to Kyoto specifically to tell me in person, heightened my anxiety, and I focused on every detail he shared,” Fils-Aimé writes. Iwata switched gears, and after he mentioned his personal news, he focused on the company’s new console, which he said was “critical” to Nintendo’s future. That console was the Nintendo Switch.

“This conversational shift was typical for Mr. Iwata; he was prioritizing the business before his own needs,” Reggie writes. “I am sure that in his mind, now that we had talked about his personal situation, it was time to move on to discussing the business.”

The gaming world lost a great leader on July 11, 2015. For Reggie, the loss was two-fold. He also lost a great friend. “The friendship that Mr. Iwata and I had was deep,” writes Reggie, who left Nintendo in April 2019. The foundation of their friendship was mutual respect, as they admired the core capabilities that each brought to the company. But it was also two men who saw their similarities.

“Mr. Iwata wasn’t just my boss. He wasn’t just someone who valued me for my business acumen. He was a friend, and that friendship made a difference, not just in my success at Nintendo but in my life.”

Disrupting the Game: From the Bronx to the Top of Nintendo is available at Amazon, Barnes & Noble, or other retailers where books are sold.