‘Red wall’ voters glad to see the back of Boris Johnson 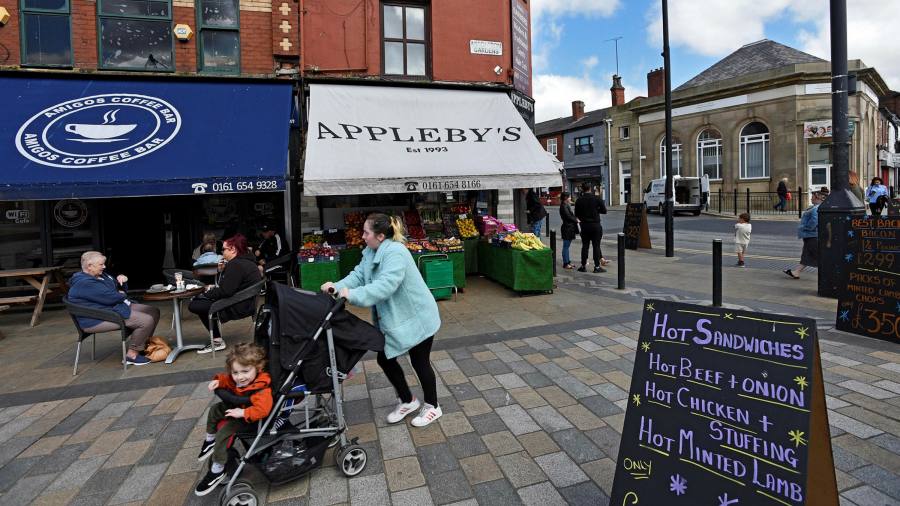 In the once-prosperous cotton town of Heywood in the north west of England, Boris Johnson’s misdemeanours were wearily taken as read on the day of his resignation. The more pressing concern was about what happens next.

“That, I think, is actually the problem,” said consultancy services manager Samantha Bamforth, checking her phone outside the Heywood Fish Bar moments before Johnson announced that he was quitting as leader of the Conservative party.

“Nobody is good. If he goes, who is going to backfill him? What are their values? What is the public opinion of them? There’s a lot going on right now, not just in this country, but the world. Who’s equipped to deal with it?”

Just two-and-a-half years ago Johnson helped secure a narrow victory that turned the constituency of Heywood and Middleton blue for the first time in its history, part of the “red wall” of pro-Brexit Labour seats in the north and midlands captured by the then-insurgent Conservative leader.

Now local residents and Tory officials are wondering who will replace him and whether he or she can help maintain the party’s hold on the area.

On Thursday, voters in this post-industrial, marginally Tory seat had little idea who should take the place of the man who quit as they were speaking to the Financial Times, but rolled their eyes when Johnson’s name was mentioned.

Even Conservative party members seemed baffled. “It’s ironic, isn’t it?” said one local Tory activist, who asked not to be named, of Johnson’s chaotic departure. “Because there was all this talk about it happening, and then it didn’t happen, and then it did, and now everyone’s going ‘what happens now?’

“You’d think they’d have thought about that, wouldn’t you?”

Outside Amigo’s coffee bar in Middleton town centre, Rachel, who did not want to give her surname, said the prime minister’s “history was obvious”. Referring to the plethora of scandals that preceded Johnson’s time in Number 10, she added: “He had questionable personality traits that they thought might be separate from work.”

But she admitted she had no idea who might be best placed to fill his shoes. “I feel like that’s been part of the problem all along.”

Wakefield, 40 miles down the road, shows the toll that Johnson’s behaviour could take on the Tory party. Two weeks ago it swung back to Labour, the latest in a series of crushing by-election defeats.

As in Wakefield, Johnson’s waning popularity now means his name is met with a mixture of swearing and snorting in Middleton.

“Tell him he’s a wanker,” said chef Darren Beesley, placing meat patties into a tupperware at the back of Amigo’s café as the prime minister made the finishing touches to his resignation speech 200 miles away.

“I just don’t like liars,” he added. “If he was an honest idiot I’d have a bit more time for him, but one mistake after the other and he didn’t seem to want to take responsibility for any of his mistakes.”

Heywood and Middleton are former cotton towns sitting on the doorstep of Manchester. In recent years Manchester has enjoyed a city centre boom and a new lease of economic life, but many towns on its periphery, such as these, have not.

It was these places that Johnson sought to address in 2019 with his “levelling up” agenda, promising to narrow Britain’s deep regional economic divides and pledging a “golden age for the UK”.

“Nothing has changed, darling,” said Shirley Davis, a Heywood healthcare worker who backed Labour in 2019 but said she had assumed Johnson would be “a lot better” than he turned out to be.

Now she feared rising bills and the potential of rising suicide rates as a result. On Thursday NHS data showed antidepressant use had jumped by a fifth in seven years.

“He needs to go, doesn’t he? Because look at the problems he’s caused, taking the mick out of the public.”

Ominously for the opposition Labour party, neither she nor the friend she was with had heard of its leader Sir Keir Starmer, pointing to the problems it could face in winning back the seat.

Johnson was not the first to highlight weaknesses in Labour’s traditional vote in the area. Heywood and Middleton’s voters had first sent a shot across the party’s bows in 2014, when Ukip, the pro-Brexit party, came within a few hundred votes of taking the seat.

One local Labour councillor pointed to the subsequent rise of hyperlocal independent parties in leave-leaning Labour areas, including Heywood and Middleton, but also parts of nearby Bury and Bolton, as well as further afield.

Johnson’s fall from popularity “will break up the Tory hold in the north but won’t necessarily translate to Labour,” the councillor predicted. “The Labour party shouldn’t rely on our opposition vote being fractured — Keir needs to do more to win hearts and minds.”

Still, the seat’s Tory MP, Chris Clarkson, will be defending a majority of just 663 at the next election. He admitted his party had not “covered itself in glory” over recent weeks, adding: “Nobody can say that we have with a straight face.”

Clarkson had stuck by Johnson this week and retained his position as a parliamentary private secretary — a junior ministerial role — as a stream of others resigned. He said he and others had “tried to hold the line and stand by the prime minister, because I do think his intentions for the country are good”.

But he added: “Realistically we’ve reached the stage where people don’t have the faith in government they should have. And if trust has gone, we have a very, very serious problem.”