Putin’s dictatorship is based now on fear rather than spin 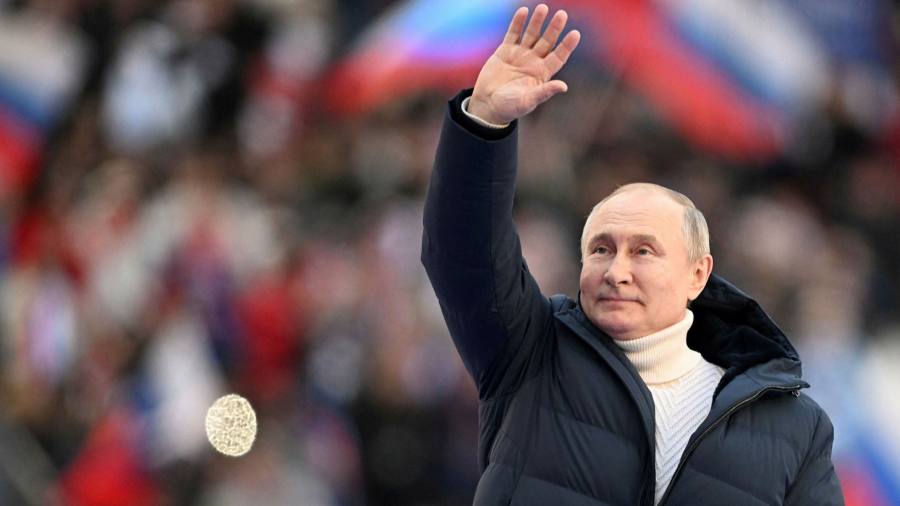 The writer is a professor of economics at Sciences Po and co-author of ‘Spin Dictators: The Changing Face of Tyranny in the 21st century’

The fact that Vladimir Putin invaded Ukraine at huge economic cost to Russia does not mean the economy does not matter to him. On the contrary, economic performance — or, rather, underperformance — played a key role in his decision. As he could no longer deliver income growth, or at least convince Russians the economy is doing better than it could otherwise, he tried to replay the 2014 Crimea scenario. This might have worked but he miscalculated.

Putin’s aggression has brought material devastation and human tragedy to Ukrainians. But the war has also destroyed Russia’s economy. In 2022, Russian gross domestic product will shrink by at least 11 per cent — the worst recession since the early 1990s. Why did he start this war?

The political scientist Adam Przeworski once wrote that the authoritarian equilibrium rests on economic prosperity, lies or fear. Like most 21st-century “spin dictators”, Putin originally eschewed fear. In his first decade in office, he presided over a period of fast economic growth, driven by rising oil prices and economic reforms in the 1990s and early 2000s. This prosperity brought him genuine popularity.

However, as Putin’s centralisation of power promoted corruption and stifled competition, his economic model lost steam. After the recovery from the global financial crisis, Russian GDP growth slowed almost to zero. As incomes stopped growing, Putin’s popularity declined substantially as well. According to the independent Levada Center, Putin’s approval rating decreased from a peak of 88 per cent in September 2008 to the low 60s in late 2013.

Putin decided to address an economic problem with a non-economic solution. Annexing Crimea in 2014 did boost his popularity, probably beyond his expectations. Levada Center polls showed that Putin’s approval went back to 88 per cent in just a few months.

However, the Crimea effect faded away. As Putin’s governance model is incompatible with economic growth, Russia’s economy continued to stagnate. Despite repeated promises of reforms, investment did not take off, capital kept fleeing the country and Russia fell further behind developed countries. Putin’s corrupt model protected his proxies at the expense of ordinary Russians. In 2019, Russian GDP was 6 per cent above its pre-Crimea level, but real incomes of Russian households were 7 per cent below their 2013 peak.

Putin then turned to Przeworski’s second pillar of authoritarianism: lies. Russia’s government intensified censorship and propaganda. Putin tried to convince Russians that their stagnating living standards were better than any potential alternative. However, this narrative was increasingly hard to spin as younger Russians evaded propaganda and circumvented censorship through social media. By April 2020, Putin’s approval fell to a historically low 59 per cent. He responded by poisoning and imprisoning opposition leader Alexei Navalny, cracking down on independent media and closing the Memorial human rights group. Even this did not help the dwindling enthusiasm for his rule.

Running out of options, Putin returned to his 2014 recipe — hoping that a short victorious war would once again raise his popularity despite the lack of economic success. This time, however, he gravely miscalculated. He overestimated his military strength, under-appreciated Ukrainians’ courage and will to defend their country, and did not expect the unity and resolve of the western response. Dictators are prone to making such mistakes, especially those who, like Putin, eliminate critics, suppress independent media and stifle debate in and outside the system. Surrounded by yes-men, Putin was bound to become overconfident — and to launch a war which was neither short nor, at least so far, victorious.

The consequences of Putin’s aggression are catastrophic for Russia’s economy and deadly for Russian politics. Before the war, he was a spin dictator, pretending to be a democrat and relying on money and manipulation of information. Once he saw that 2022 is not 2014, he moved to Przeworski’s third pillar: fear. A week after the war started, he closed down the few remaining independent media and introduced wartime censorship.

Borrowing from Adolf Hitler, he now refers to antiwar protesters as “national traitors” and threatens to “spit them out like a fly”. Putin’s regime has completed its reversion from a 21st-century spin dictatorship to a 20th-century dictatorship based on fear. Unfortunately, this is what Russia will look like until he is gone.