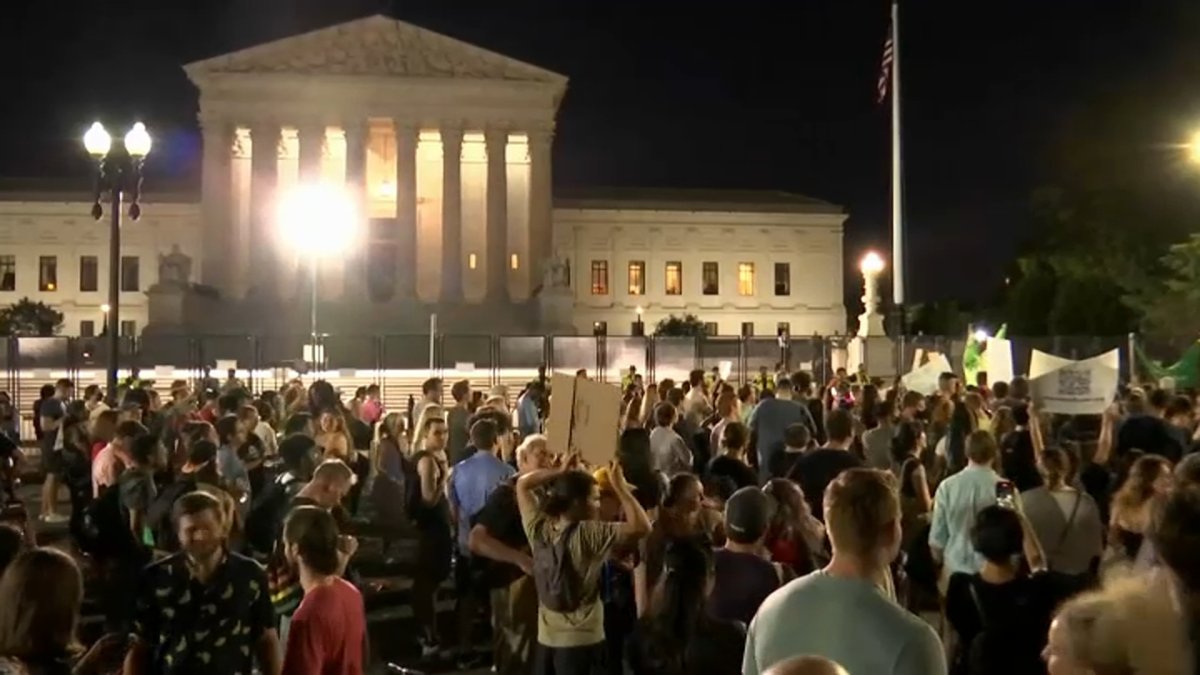 Droves of protesters descended on the Supreme Court Friday in the wake of justices overturning the landmark 1973 Roe v. Wade case, eliminating the constitutional right to abortion after 50 years.

The demonstrations continued into the night with speaker after speaker addressing the crowd until the rally ended shortly before 11 p.m. and the crowd dispersed.

Protesters for and against a federal right to abortion gathered outside the court within moments of the ruling’s announcement. Cheers erupted from anti-abortion rights demonstrators, and some women were seen crying.

The crowd continued to grow into the afternoon. The scene was loud and largely peaceful.

Some pro-abortion rights groups were seen with green and orange signs reading: “Overturn Roe? Hell No” and “Abortion on demand and without apology.” A crowd of anti-abortion demonstrators was seen in red and blue shirts that say, “The pro-life generation votes.”

Authorities separated two crowds from each other, which is common at major protests in the nation’s capital.

The Metropolitan Police Department is on high alert and will be under a “full departmental activation” until Tuesday to support demonstrations, police and Department of Homeland Security officials said in a statement. MPD says it is coordinating with federal partners.

“Mayor [Muriel] Bowser has been briefed and is committed to providing the necessary resources and support to keep our community safe,” the statement said. “As the nation’s capital, we take seriously our responsibility to support First Amendment rights.”

“However, the department’s district commanders are aware of important sites within their districts and are directing resources appropriately,” the department said.

Fairfax County police say they are increasing staffing this weekend.

The Supreme Court has been surrounded by 8-foot-tall fencing since shortly after a draft opinion on the case was leaked on May 2, drawing pro- and anti-abortion rights groups to demonstrate. The fencing keeps demonstrators off the Supreme Court plaza, which is typically open to the public. More fencing was added in recent weeks.

Support for abortion rights hit a new high ahead of the decision, with 60% of Americans saying abortion should be legal in some form, according to an NBC News poll.

Rep. Marjorie Taylor Greene, the Republican congresswoman from Georgia, waded into the crowd of demonstrators. She told reporters that the decision is a “blessing” and an “answered prayer,” NBC News reported.

One pro-abortion-rights demonstrator wearing an American flag mask, bandana and scarf said she saw Greene and got pushed away by bodyguards.

“I was screaming at her to stop being racist,” the woman said. “Look at what the Supreme Court has done. They are ruling in favor of the Republicans. That’s what it is.”

“This is going to affect the Hispanic community, the African-American community, because women, we are more vulnerable. We don’t have insurance,” she continued.

“For 50 years, one-third of my generation has been slaughtered due to the violence of abortion,” another protester said. “Well, the survivors have risen up and we will not stand for the dismemberment, and poisoning, subjugation of the most at-risk among us any longer.”

Pro-abortion-rights demonstrators expressed dismay. Some were carrying banners or cloth in green, a color used to show support for abortion rights.

Alya Madhani, a teenager wearing a green armband given out by an abortion-rights supporter, said she was in D.C. on vacation but wanted to see the demonstrations.

“It’s so crazy for me personally. I’m adopted. So, knowing other mothers out there can’t make a choice… it’s pretty hard,” she said while fighting tears. “I wanted to yell.”

But she said she’s hopeful, too: “It’s really empowering, though, to see younger people on the front there.”

“I feel betrayed, and I feel lost,” 19-year-old Skye, who came to D.C. from Virginia to demonstrate, told NBC. “Hopefully, in the future, we can have some progress and not just be moving backward.”

The decision means states can bar people from terminating pregnancies, and many states had “trigger laws” in place to stop abortions if Roe were overturned.

About two miles from the Supreme Court, one protester said they scaled the Frederick Douglass Bridge to call on Congress to protect abortion access under federal law.

They flew a green banner from the top of one of the bridge’s sweeping arches in Southwest D.C. — a city with some of the least restrictive abortion laws in the country.

The U.S. Department of Homeland security warned of a “heightened threat environment” in its June 7 National Terrorism Advisory System Bulletin, saying that the abortion case was one of several current events that could inspire violence.

DHS says it is coordinating with the FBI and other agencies to monitor potential threats.

The House approved Senate-passed legislation that would provide security to family members of Supreme Court justices, sending the bill to President Joe Biden nearly a week after an armed man was arrested outside Justice Brett Kavanaugh’s house.

Protesters have marched regularly near their homes in the D.C. area. Those demonstrations have been peaceful but spurred the Republican governors of Maryland and Virginia to call for enhanced security. Fears escalated after the arrest at Kavanaugh’s home.

A handful of demonstrators walked back and forth in front of Kavanaugh’s home Friday, where there was a large police presence. Montgomery County police won’t allow protesters to remain stationary in front of the home.

About two dozen pro-abortion rights demonstrators peacefully protested for almost an hour Friday evening outside of the entrance to the gated community where Justice Thomas lives in Fairfax Station. They pledged to return every Friday night until abortion rights are restored.