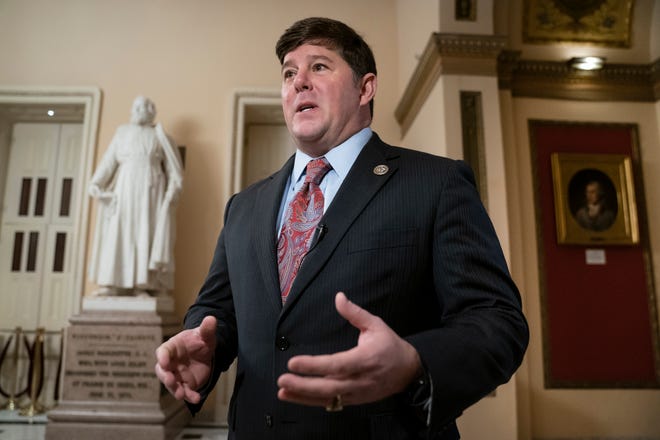 A year-and-a-half-long probe by the House Ethics Committee into alleged misspending of campaign and congressional money and misuse of his office by Rep. Steven Palazzo isn’t likely to yield results, said an attorney for the group that filed the initial complaint against the congressman.

Kedric Payne, vice president of the Campaign Legal Center watchdog group, said the House Ethics Committee has failed to create an investigative subcommittee on the Palazzo case and has instead classified it as a review. This, he said, makes it likely the complaint will “just sort of evaporate” when the 117th Congress ends on Jan. 3, with the committee neither clearing Palazzo nor taking any action against him.

“The chances are very low that this will be further investigated because the committee often just ends these (reviews) when the current congress officially ends,” Payne said. “… It is a very sad situation with congressional ethics that there’s not serious enforcement. It’s a problem that comes from self-policing — these members have to hold themselves accountable, and that is inevitably going to lead to a lack of enforcement … but the Office of Congressional Ethics report (on Palazzo) is out there, and it at least gives voters information they need.”

A spokesman for Palazzo said the allegations were politically motivated and that Palazzo hopes the committee does follow through and clear his name.READ MORE: Rep. Steven Palazzo ethics investigation: Is the congressman’s campaign account a slush fund?

Palazzo, who has held the District 4 U.S. House seat since 2011, is up for reelection this year and faces a crowded field of challengers in the June 7 Republican primary. The alleged ethics violations have been a cloud over Palazzo after a challenger in his 2019 primary saw what he believed were irregularities in Palazzo’s campaign finance records and hired a private investigator. He then turned his findings over to the Campaign Legal Center, which filed a complaint with the Office of Congressional Ethics.

The OCE report, made public early last year, claimed that Palazzo misspent campaign and congressional funds and said it found evidence he used his office to help his brother and used staff for personal errands and services. After its investigation, the OCE handed the matter off to the House Ethics Committee, which announced in mid-December of 2020 that it was looking into the allegations.

The allegations in the OCE report included that Palazzo used campaign funds to pay himself and his erstwhile wife nearly $200,000 through companies they own, including thousands to cover the mortgage, maintenance and upgrades to a riverfront home Palazzo owned and wanted to sell. But Palazzo said that the payments were legally made for the campaign’s rent of the home for a campaign office.

The OCE report said it found “substantial” evidence that Palazzo improperly used his office to help his brother, Kyle Palazzo. The report said Kyle was prohibited from re-enlisting in the Navy and that Palazzo used his office and resources to contact the assistant secretary of the Navy to help his brother. The OCE also questioned the campaign paying Kyle Palazzo as a “political coordinator” and letting the brother use the campaign’s credit card for food, gas, hotel rooms and other goods and services.

Brasell said Palazzo’s office only offered Kyle assistance that it would any constituent and that his paid work for the campaign was aboveboard.

The OCE report also claimed Palazzo had used congressional staffers for personal errands and campaign work. It said former staffers it interviewed said Palazzo’s office failed to separate official work from campaign and personal activities, including shopping for his kids. In 2011, during his first term in office, Palazzo had also faced allegations that he and his wife used congressional staffers for babysitting, chauffeuring kids around and moving.

A Mississippi Today report in 2020 also questioned thousands of dollars in Palazzo campaign spending on swanky restaurants, sporting events, resort hotels, golfing and gifts. Federal law and House rules prohibit using campaign money for personal expenses. The Palazzo campaign at the time said it had found a few mistaken, non-permissible purchases and the Palazzo had repaid the campaign.

Brasell said this week that Palazzo has reimbursed his campaign $10,821. He said it is common for campaigns to make such mistakes, and said Palazzo has hired a new accounting firm to handle his campaign finances.

The Campaign Legal Center has said that Palazzo, who makes $174,000 a year as a congressman, appeared to use his campaign account as a “personal slush fund.”

Since its announcement in 2020, House Ethics has said little about the Palazzo case, beyond a posted statement last year that it was treating it as a review, not forming an investigative subcommittee. A spokesman for the committee this week said there were no further updates.

This article first appeared on Mississippi Today and is republished here under a Creative Commons license.

20 million gallons of raw sewage in creek per EPA report