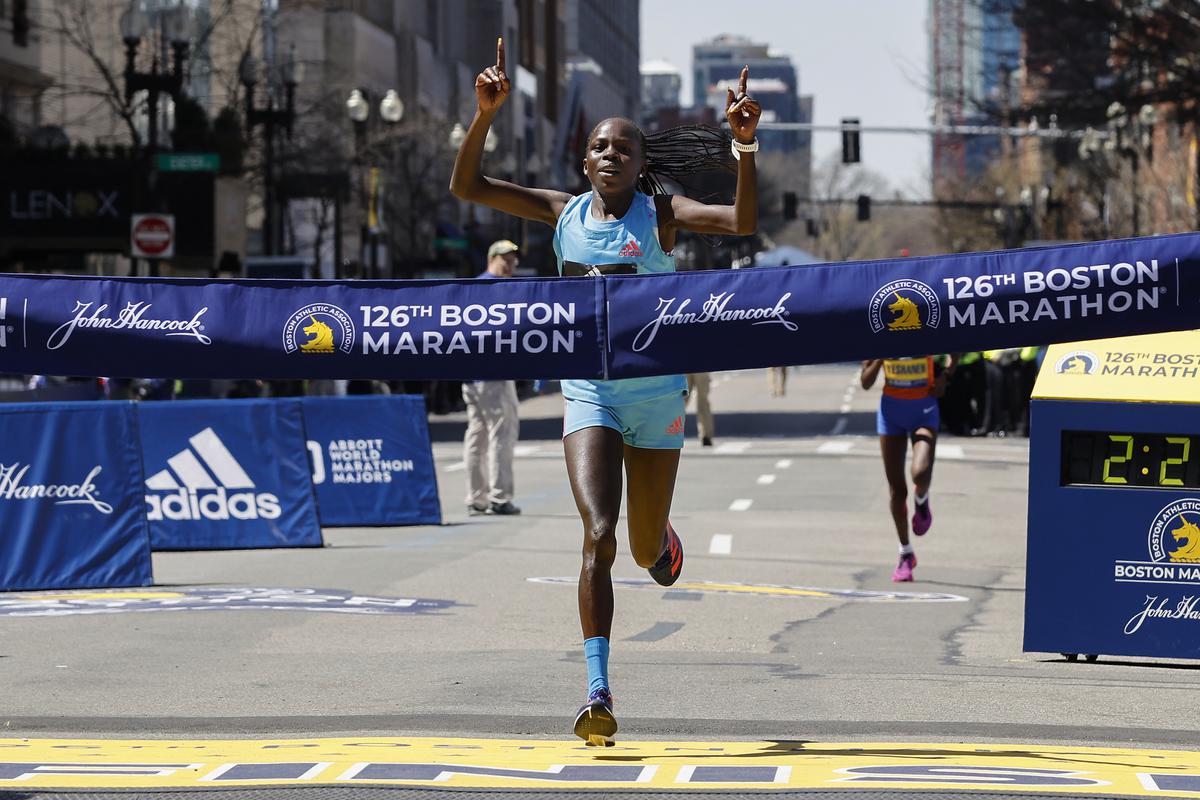 Peres Jepchirchir, of Kenya, crosses the finish line to win the women’s division of the 126th Boston Marathon, Monday, April 18, 2022, in Boston.

BOSTON — Reigning Olympic champion Peres Jepchirchir capped the celebration of a half-century of women in the Boston Marathon with a finish to top them all.

The 28-year-old Kenyan won a see-saw sprint down the stretch on Monday, when the world’s oldest and most prestigious annual marathon returned to its traditional spring start for the first time since the onset of the coronavirus pandemic.

On the 50th anniversary of the first official women’s race, Jepchirchir traded places with Ethiopia’s Ababel Yeshaneh eight times in the final mile before pulling ahead for good on Boylston Street and finishing in 2 hours, 21 minutes, 1 second.

“I was feeling she was strong. I pushed it,” said Jepchirchir, who earned $150,000 and the traditional gilded olive wreath to go with her Olympic gold medal and 2021 New York City Marathon title. “I fell behind. But I didn’t lose hope.”

Evans Chebet completed the Kenyan sweep, breaking away from Gabriel Geay with about four miles to go to finish in 2:06:51 for his first major marathon victory. The 2019 winner Lawrence Cherono was second, 30 seconds back, defending champion Benson Kipruto was third, and Geay fell back to fourth.

Sharing a Patriots’ Day weekend with the Red Sox home opener — the city’s other sporting rite of spring — more than 28,000 runners returned to the streets from Hopkinton to Copley Square six months after a smaller and socially distanced event that was the only fall race in its 126-year history.

Fans waved Ukrainian flags in support of the runners whose 26.2-mile run Monday was the easiest part of their journey. Forty-four Ukrainian citizens had registered for the race; only 11 started, and all finished.

“I decided to come here and show that Ukrainians are strong, we’re fighting and we hope peace will come soon,” said Dmytro Molchanov, a Ukrainian who lives in New York.

Athletes from Russia and Belarus were disinvited in response to the invasion. Ukrainians who were unable to make it to Boston were offered a deferral or refund.

“Whatever they want to do, they can do,” Boston Athletic Association President Tom Grilk said. “Run this year, run next year. You want a puppy? Whatever. There is no group we want to be more helpful to.”

Jepchirchir and Yeshaneh, who was third in New York last fall, spent most of the morning running shoulder to shoulder — or even closer: Just after the 25-kilometer marker, the Ethiopian’s eyes wandered from the course and she drifted into Jepchirchir.

Yeshaneh reached out to apologize, and the two clasped each other’s arms as they continued on.

“In running, we understand each other and we maybe somebody came and bumps, but it’s OK,” Jepchirchir said. “It was not rivalism; it was just an accident.”

Beaten, Yeshaneh finished four seconds back. Kenya’s Mary Ngugi finished third for the second time in six months, following her podium in October after the 125th race was delayed, canceled and delayed again.

About 20 men stayed together — with American CJ Albertson leading for much of the way — before Chebet and Geay broke from the pack coming out of Heartbreak Hill. Chebet pulled away a couple of miles later.

“We had communicated earlier, all of us. We wanted to keep running as a group,” said Chebet, who finished fourth in London last fall. “I observed that my counterparts were nowhere near me and that gave me the motivation.”

This race marked the 50th anniversary of Nina Kuscsik’s victory in the first official women’s race. (But not the first woman to finish: That honor belongs to Bobbi Gibb, who first ran in 1966 among the unofficial runners known as bandits.)

At Wellesley College, the women’s school near the halfway point, the iconic “scream tunnel” was back after the pandemic-induced absence — and louder than ever. One spectator in Wellesley held a sign that read “50 Years Women Running Boston,” along with names of the eight who broke the gender barrier in 1972.

Five of the original pioneers returned for this year’s celebration, including Valerie Rogosheske, who finished sixth in ’72; she served as the honorary starter for the women’s elite field and ran the race with her daughters, who held up banners marking the anniversary as they crossed the finish.

Rogosheske, who wore Bib No. 1972, said at the starting line that she had been planning to hide in the bushes and run as a bandit 50 years ago until women got the go-ahead a few weeks before the race.

“It’s a reminder that we’ve got it pretty easy,” said 2018 winner Des Linden, who finished 13th on Monday. “Fifty years ago, they were breaking barriers and doing the hard part.