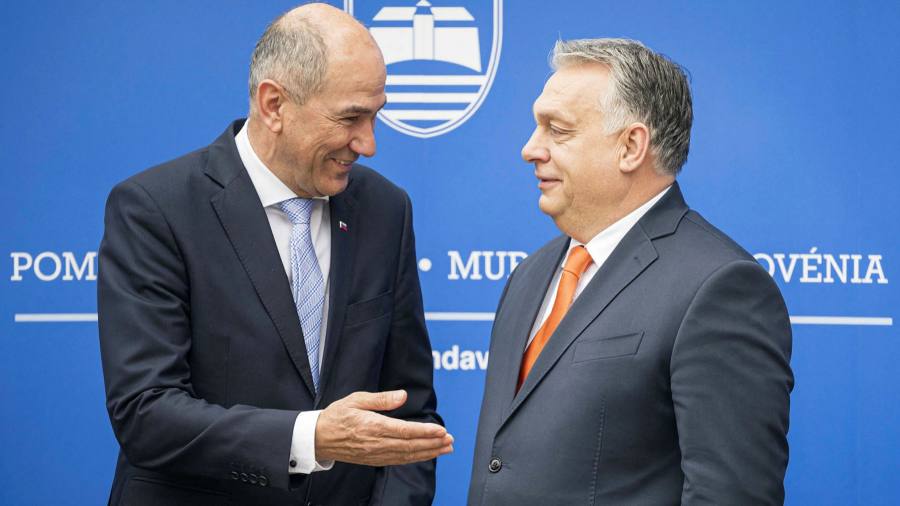 Janez Jansa fulfilled the role of European statesman when he took time out from Slovenia’s election campaign to make a long train trip to Kyiv last month — one of a trio of EU leaders to show support for Ukraine and display western unity.

In his third spell in office, however, Slovenia’s prime minister has more often been seen as an antagonist towards EU allies with his rhetorical attacks on immigrants, non-government organisations and the media, which even tainted Ljubljana’s control of the EU’s rotating presidency last year.

Jansa faces a general election on Sunday with his conservative SDS party lagging in the latest polls against a new centre-left party. He is still hopeful of being able to form another ruling coalition: his campaign message, reflected on billboards across the EU member state, focuses on a proven political record, promising a leader “without experiments”.

But his close relationship to Viktor Orban, his fellow conservative leader in neighbouring Hungary, is alienating a growing number of voters and causing concern about the “Hungarianisation” of Slovenia — a reference to Jansa’s tendency to ride roughshod over critics and independent media.

“Jansa would be OK, but I just hate the way he acts like a bully on a school playground,” said Svjetlana Radosavljevic, a pensioner enjoying fried fish in the market at the foot of Ljubljana Castle. “It’s like his buddy Orban in Hungary. Not a good role model.”

Orban won a fourth successive election with a landslide victory in Hungary earlier this month, a feat Jansa is unlikely to repeat in Slovenia’s fractured political system, where coalitions involving several smaller parties are more typical.

Voters in the country of 2.1m people are more concerned about corruption and the relationship with its neighbour than the economy. Growth rates and the job market have rebounded as the Covid-19 crisis has receded, and analysts say Slovenia’s elevated deficit and public debt levels are risky but under control.

“On economic terms you can’t really criticise the government,” said Mojmir Mrak, a professor of economics at University of Ljubljana. “Non-economic issues will determine the elections . . . ‘Hungarianisation’ is a definitive issue.”

Jansa, Slovenia’s most recognisable politician, first served as premier in 2004. In 2013 he was convicted of corruption and given a two-year prison sentence. Having always denied the charges, he was released after six months, his sentence annulled and conviction overturned. He returned to office in 2020 after the previous premier tried to stage early elections but Jansa quickly pulled together a replacement coalition instead.

His main adversary on Sunday is a new party called Svoboda, or Freedom, led by Robert Golob, a charismatic former executive of state-owned energy company Gen-I. Golob wants to end the alleged oppression and cronyism of Jansa’s regime and execute an ambitious green transition.

“The party’s new social contract will not leave anyone behind,” Golob said when he unveiled his programme last month. He favours an inclusive and open society based on the rule of law.

Parliament speaker Igor Zorcic last year left the ruling coalition, citing “Jansa’s Orbanisation”. Critics such as Zorcic worry about Jansa’s self-professed “war with the media” — an ideology the premier spelt out two years ago in an essay — and his preference for communicating directly with voters and bypassing critical coverage in the manner of former US president Donald Trump.

A loyal media empire is a key part of the Orban blueprint imitated by Jansa. A group of Slovenian media outlets owned by Hungarian businessmen echo the premier’s Trump-like attacks on social media. They include news channel Nova24TV, Planet TV and the weekly magazine Demokracija and its online regional outlets. They are part of a growing network of media organisations in central European and Balkans countries that are owned by businesses with close links to Hungary’s ruling party, according to a report by the International Press Institute.

Opposition politician Jani Möderndorfer of established centre-left LMS party last week said he would file legal complaints against SDS, which he says has unlawfully tried to establish a model like Orban’s.

SDS and government officials did not reply to questions from the FT about media ownership. Several requests to interview Jansa were rejected.

“This [media] issue is one big speculation,” Jansa told a commission investigating media influence in March. “This commission was set up because the international left feared that its exceptional media monopoly in Slovenia would be at least slightly endangered.” 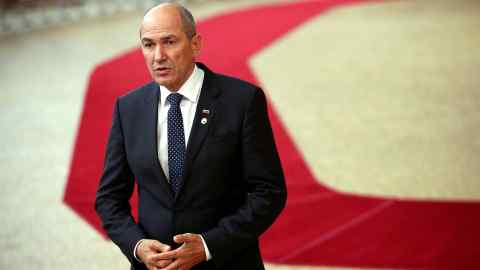 Although the Hungarian-owned outlets currently have a limited audience, media analysts say their influence on Slovenian politics could grow.

“If SDS get a new term, Slovenia’s media landscape could become a lot like Hungary’s today,” said Uros Esih, a journalist at national daily Delo. “In five years’ time it might make a difference politically.”

Whatever the outcome of Sunday’s election, Slovenia is likely to honour its western security and business alliances, experts say. The country imports most of its gas from Russia, but economists say it is better placed than some EU countries to withstand a decline in trade with Moscow.

Svoboda’s Golob, however, has made a firmer commitment to EU values than Jansa.

“We will design and pursue a foreign policy that is committed to the fundamental values of the EU and will support a strong and united EU,” the party’s programme said. “Slovenia will be part of the core EU countries.”

That difference is considered fundamental, and a new government could leave Hungary’s Orban with one less ally as he fights Brussels over rule-of-law issues.

“With a change,” said Zorcic, the parliament speaker, “Slovenia will possibly take a stronger position on the rule of law.”

The jubilee curse: a week of boorish republicanism