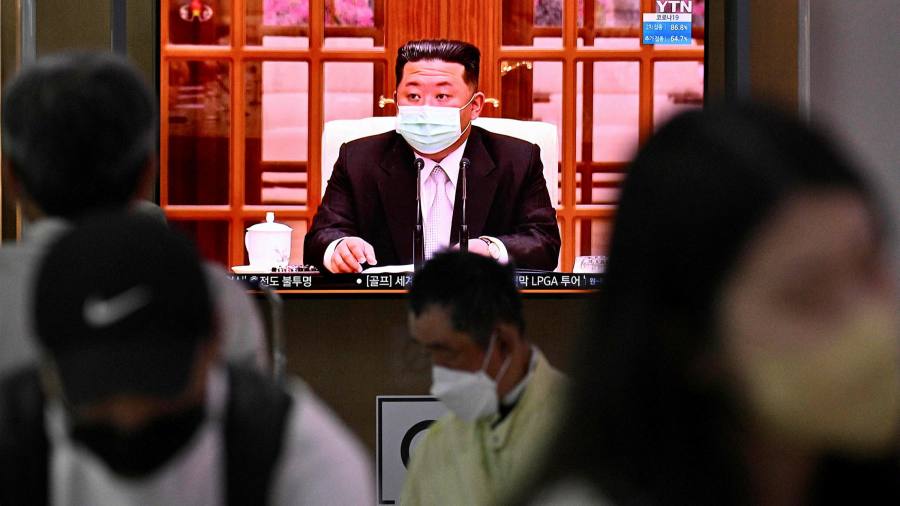 North Korea said on Friday that six people have died and 350,000 have been treated since April for an “obscure febrile disease”, a day after the isolated country confirmed the presence of coronavirus within its borders for the first time.

State news agency KCNA reported that 18,000 people had been identified on Thursday as having “a fever whose cause couldn’t be identified” and 187,800 were in quarantine.

Authorities said one of the dead was infected with Covid-19, adding that the person had contracted the highly transmissible BA.2 Omicron coronavirus sub-variant.

“A fever whose cause couldn’t be identified explosively spread nationwide from late April and more than 350,000 people got fever in a short span of time,” KCNA said.

North Korea is one of only two countries in the world to have not initiated a vaccination programme.

State media broadcast images of Kim Jong Un wearing a surgical mask on Thursday as he presided over a politburo meeting of the ruling Workers’ party, during which he ordered “all cities and counties across the country to thoroughly lockdown their areas” in order to “completely block the transmission of the malicious virus”.

Kim added during a visit to North Korea’s state emergency epidemic prevention headquarters: “It is the top priority to block the virus spread by actively locking down areas and isolating and treating persons with fever in a responsible manner.”

“Given what we saw in Hong Kong earlier this year, plus what we know about the poor respiratory health and malnutrition of a significant proportion of the North Korean people, to say nothing of the country’s dreadful public health infrastructure, it is reasonable to assume a worst-case scenario that would be catastrophic,” said Christopher Green, a senior consultant for the International Crisis Group think-tank.

Green added that the effects could be mitigated by the fact that North Korea’s population is relatively young. 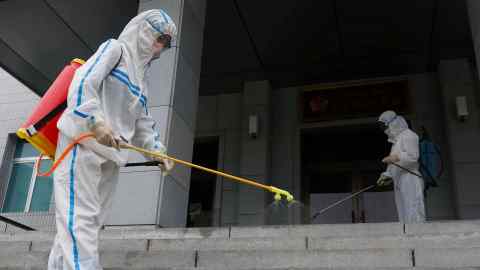 Lina Yoon, senior Korea researcher at Human Rights Watch, said: “Most North Koreans are chronically malnourished and unvaccinated, there are barely any medicines left in the country, and the health infrastructure is incapable to deal with this pandemic.”

South Korea has long expressed its willingness to provide humanitarian assistance, including vaccines, but its offers have been consistently rebuffed by the Kim regime.

Following the disclosure of the Covid-19 cases, North Korea fired three short-range ballistic missiles towards the Sea of Japan, which is known in Korea as the East Sea. It was the country’s 15th missile test of the year, and the first since Tuesday’s inauguration of South Korean president Yoon Suk-yeol.

“The missile tests are meant to signal business as usual, and to ensure that others keep North Korea at arm’s length while it copes with a crisis,” said Green. “The military’s job is to signal readiness and ensure North Korea’s enemies do not try to exploit their temporary weakness.”