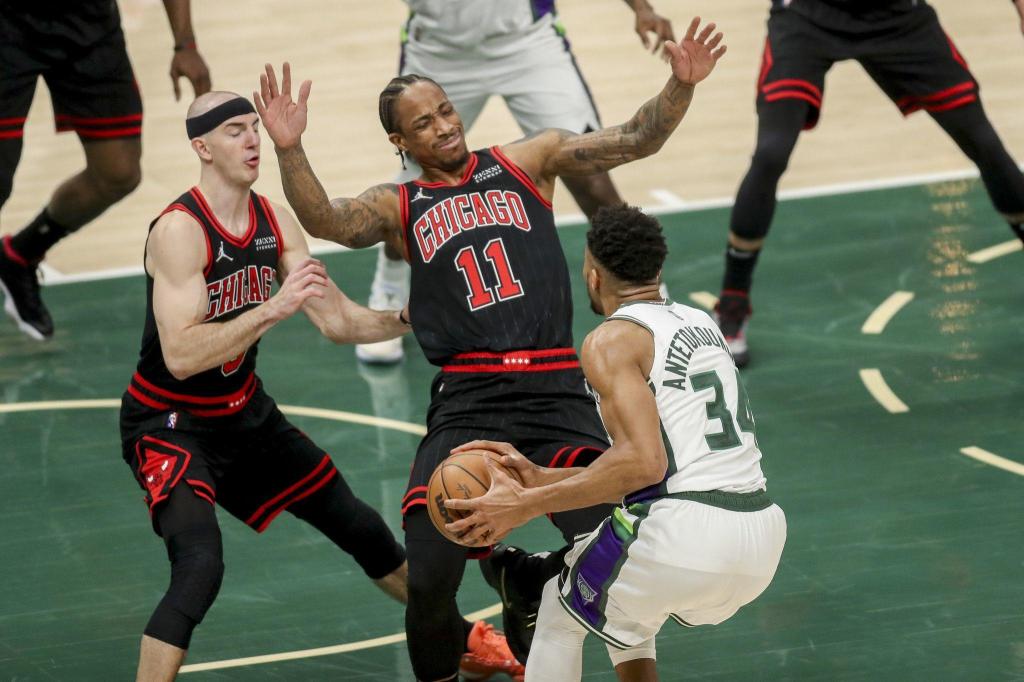 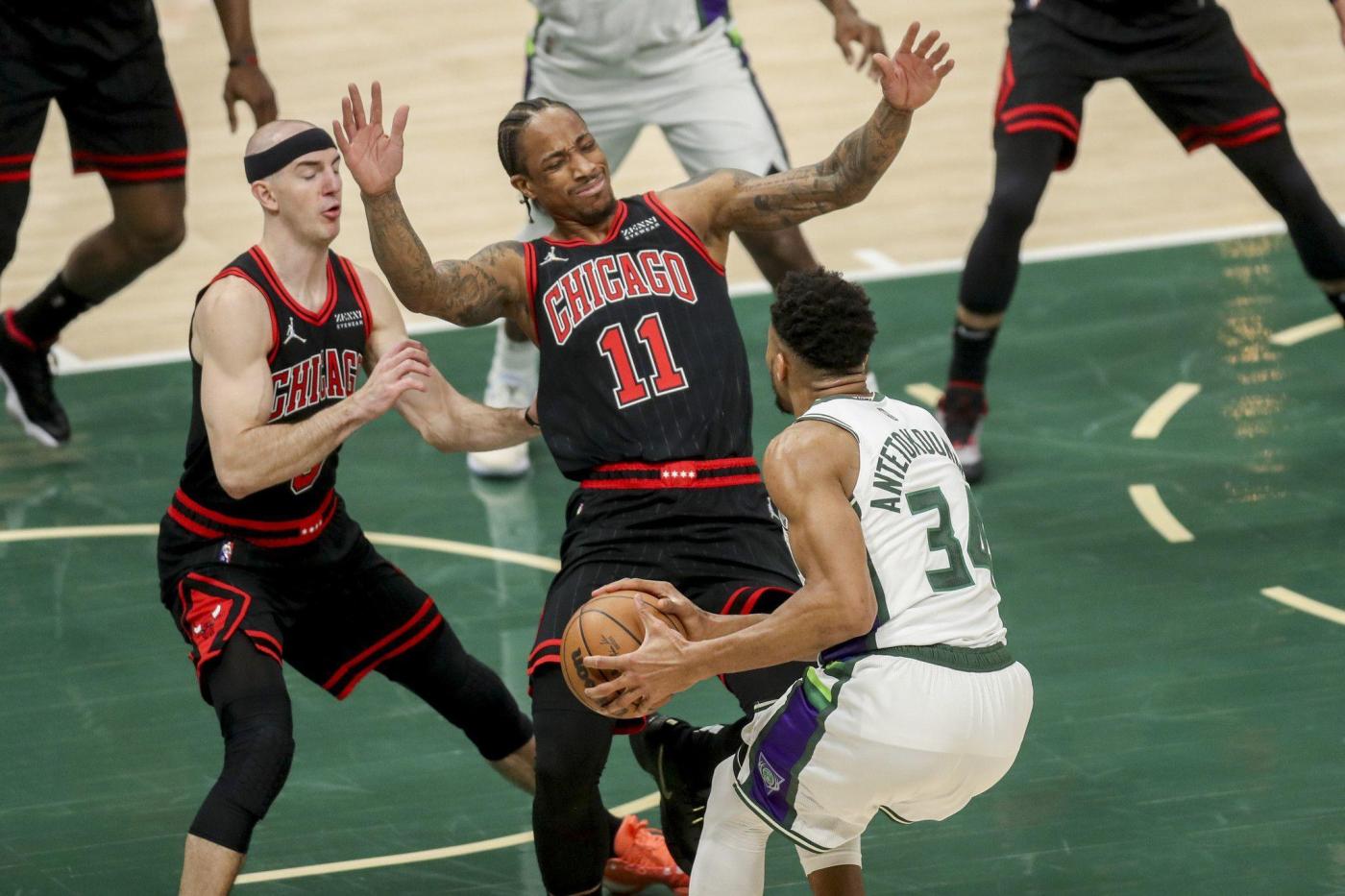 In the fourth quarter of any game, the Chicago Bulls are always comfortable with a single-digit deficit and the ball in DeMar DeRozan’s hands. That has been a tried-and-true formula throughout DeRozan’s first season in Chicago.

But DeRozan couldn’t deliver late-game heroics in Game 1 of the opening round of the NBA playoffs against the Milwaukee Bucks. He didn’t make a fourth-quarter basket until 2:11 remained in the game, going 1-for-7 in the quarter and taking only two free throws in the second half.

And despite the Bulls erasing a 16-point first-half deficit, a fourth quarter devoid of DeRozan’s magic allowed the Bucks to escape with a 93-86 win. DeRozan finished with 18 points on 6-of-25 shooting as neither team cracked 100 points in an ugly night of bludgeoning basketball.

“I don’t know what the hell is going on,” DeRozan said. “Every shot I took felt good. I guarantee me or Zach (LaVine) or Vooch (center Nikola Vučević) aren’t going to miss that many shots again. … Most of the shots I took were wide open. Wide open. No way in hell I shoot 6 for 25 again.”

The early minutes looked dire for the Bulls. Brook Lopez and Giannis Antetokounmpo combined for a 9-0 opening burst, and the Bucks quickly climbed to a 16-point lead. The Bulls knew they couldn’t counter the size of the Bucks straight up, but they also failed to capitalize on a key advantage from long range.

The Bucks sacrifice defending the 3-point line to focus nearly all of their defensive attention on the paint, where Antetokounmpo and Lopez loom large to affect every layup and post-up. This left the long-range shots wide open, but the Bulls went 3 for 17 from 3-point range in the first half, including a 10-minute stretch without hitting a shot behind the arc.

The Bulls needed all three of their All-Stars to show out to keep level with the Bucks. Vučević fulfilled that task in the third quarter, aggressively backing down Lopez for a post-up bucket, then splashing a tying 3-pointer on the next play. Coby White knocked down a 3 to lift the Bulls into a 67-64 lead — their first of the night — with 3:11 left in the third.

“We’ve had conversations all week about just staying together,” DeRozan said. “There’s going to be parts of the game where it’s going to get hectic, they’re going to hit some shots, the crowd’s going to get into it and we’ve got to pull together. We’ve got to stay the same.

“We were prepared for it. It sucked that it happened in the first couple minutes of the game, but we were ready for it and buckled down after that.”

The Bulls stretched their short-lived lead to five, but the Bucks had a simple answer to quell the comeback — substituting Antetokounmpo back into the game. The Bucks went on a 10-2 run to retake a three-point lead to end the third, with Antetokounmpo finishing the quarter with a bulldozer drive to flatten DeRozan on the way to a layup.

The Bulls kept the game heartbreakingly close but couldn’t close a one-possession gap in the final two minutes. Vučević missed an unguarded putback with 52.7 seconds left, and LaVine missed a potential tying 3-pointer with 29.7 seconds left.

“If you can’t learn from it, it’s going to bite us in the ass,” LaVine said. “I thought we did a good job with us shooting this way and defending the way we did, keeping the game going. We had a lot of missed opportunities.”

After seven years of chasing his postseason debut, LaVine recorded a double-double (18 points and 10 rebounds) in his first playoff game. But fouls nearly nullified his closing presence after he picked up his fifth in the second minute of the fourth quarter, limiting LaVine defensively through the final stretch, and he shot 6 of 19 from the field (2 of 10 on 3-pointers).

Vučević also was 2 of 10 from 3-point range and struggled with consistency against sizable matchups in Lopez and Antetokounmpo, but the Bulls center finished with 24 points and 17 rebounds.

Antetokounmpo led the Bucks with 27 points and 16 rebounds, and Lopez added 18 points.

The Bucks turned the ball over 21 times to offer the Bulls ample opportunities to even the score on the break, but the Bulls scored only five points in transition.

Coach Billy Donovan kept Alex Caruso under a slight playing-time restriction, starting him at point guard but keeping his minutes in the low 30s to help his recovery from back spasms. Rookie Ayo Dosunmu played only nine minutes in his playoff debut after assuming the role of backup point guard behind Caruso following Lonzo Ball’s season-ending injury.

Instead, Donovan utilized a wider rotation of players, including forward Derrick Jones Jr., who filled in at guard during rotations without Antetokounmpo on the court.

Patrick Williams started in his first playoff game but didn’t take a shot until the final two minutes of the first half. The second-year power forward finished with five points on 1-of-3 shooting.

The Bulls will return to Milwaukee for Game 2 on Wednesday at Fiserv Forum. Although they nearly pulled off a come-from-behind win in Game 1, they aren’t eager to repeat the feat.

“It’s going to be a very long series if we keep getting down and trying to dig out of a hole,” Vučević said. “We have to start games better, but we saw what we need to do to play with them.”