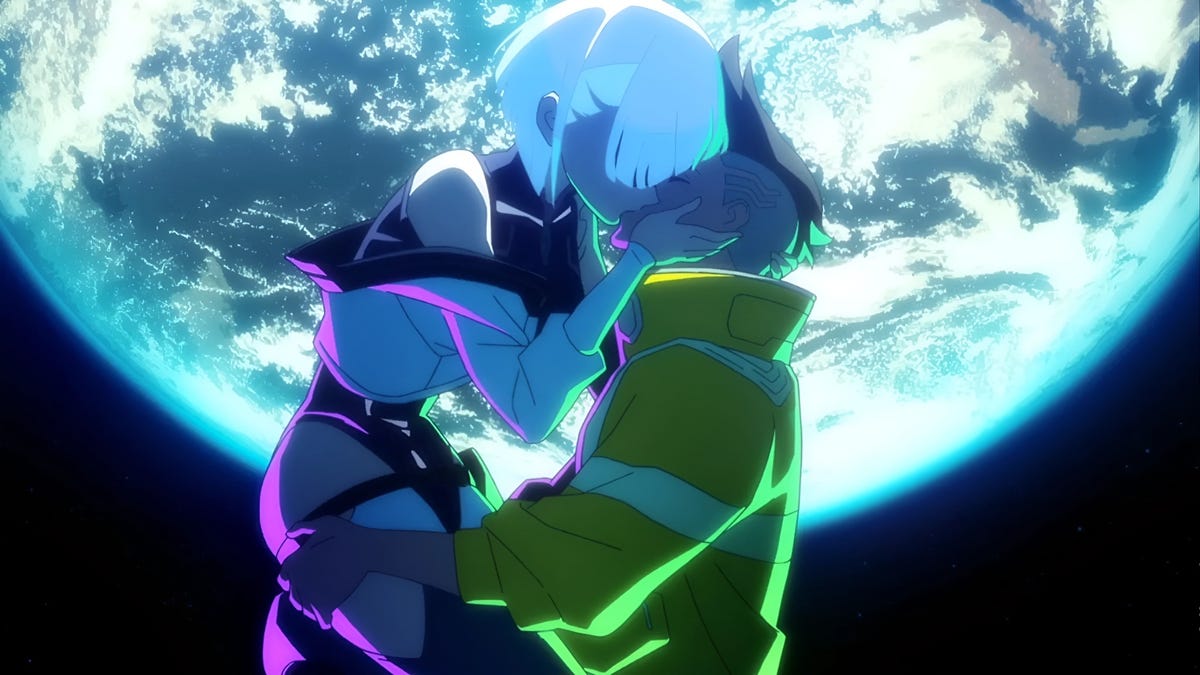 If you watched Netflix’s new anime, Cyberpunk: Edgerunners, chances are you’re still coping with its emotionally devastating ending and have brought it up to your therapist unprompted on more than one occasion. But the pain doesn’t stop there, friends. There’s a high probability Netflix’s aggressive autoplay feature, which will queue up something new for you to watch while your blurry vision regains focus from all the crying, could have caused you to miss a really cool reference hidden within the anime’s closing credits.

If you’ve been living under a rock with no wi-fi connection, Cyberpunk: Edgerunners is game developer CD Projekt Red and anime studio powerhouse Trigger’s 10-episode show which premiered on the streamer on September 13. It follows a street kid named David Martinez who, after the untimely death of his mother, dives head-first into Night City’s criminal underworld with the help of his crew of edgerunners and his highly volatile military tech.

Yesterday, Rafal Jaki, the executive producer and showrunner for Cyberpunk: Edgerunners posted a tweet congratulating a Redditor from the r/Edgerunner subreddit for finding an easter egg relating to the mysterious cybergirl Lucy and her fascination with the moon. While Trigger and “going to space” aren’t strangers to one another, this time around, its affinity for the cosmos runs deeper than just aesthetics.

According to Reddit user YorBoyChris, the brief clips of Lucy juxtaposed with shots of the moon during the anime’s closing theme song, “Let You Down,” is a reference to The Moon tarot card as it appears in Cyberpunk 2077, where it’s one of many tarot cards you can find throughout Night City as part of the Fool on the Hill sidequest.

For those unfamiliar with this tarot card’s meaning, it basically boils down to things not always being what they appear to be and letting your gut feeling guide you through this mess of a world. A message which is the entire thesis of Lucy’s character within Cyberpunk’s mythos, given her desire to escape Night City, a town she sees as a “cage of light.” Also, as a side note, if you draw The Moon tarot face up, it symbolizes “the release of fear, repressed emotion, and inner confusion, when drawn upright, it symbolizes “illusion, fear, and anxiety,” according to Biddy Tarot. I don’t know about you, but that adds a whole new layer to the euphemistic phrase, “the moon looks beautiful tonight.”

The Moon wasn’t the only Tarot reference the Redditor spotted in the anime. During the climax of the anime’s 10th episode (“My Moon My Man”), YurBoyChris posited that David’s sunshine boy smile wasn’t circumstantial, but served as the show’s reference to The Sun tarot, which symbolizes achieving one’s dream. Although Jaki didn’t give that theory a stamp of approval, it seems to have some weight as far as I’m concerned.

Read More: Netflix’s Cyberpunk: Edgerunners Tells The Story I Wished For In Cyberpunk 2077

As far as the moon tarot is considered, Jaki told Kotaku via email that Trigger was the one in charge of that reference. Kotaku reached out to CD Projekt Red’s community manager, Satoru Homma, for comment. When asked if viewers should expect to find more hidden easter eggs in the anime, Jaki told Kotaku that the show is still packed with a ton of references, but he’s not going to spill the cyber-beans anytime soon.

“I would like to keep that to myself as I take immense joy once someone connects that dot,” Jaki said, capping off the email with a smiley face.

Jaki did leave one bread crumb behind in the form of the question: “Where does the police come from?” so you internet sleuths can have at that one. Godspeed.

Edgerunners’ clever Tarot reference aside, whenever Jaki isn’t sharing dope fan art of the show on Twitter, he’s been dropping more hints about some of the anime’s behind-the-scenes details. The most notable deets were the origin of Lucy’s name, funny interaction with Trigger over the show almost excluding best girl Rebecca, and whether David’s Sandevistan can be used during sexy times. True believers know the answer to that question is a resounding yes.

Since the show’s debut, it’s been getting racking Ws in both the anime sphere and has even revived 2077 from the malaise that comes from a low player count. Currently, Edgerunners is ranked as the number two video game anime show on Rotten Tomatoes, between League of Legends’ Arcane and Castlevania. Other anime reviewers within the community like YouTuber Geoff Thew from Mother’s Basement and Gigguk and I think Edgerunners might be the best thing Trigger has ever made, which is saying something considering its the same studio behind other beloved anime like Kill la Kill and Promare.

Edgerunners’ undeniable success has reinvigorated both new and old players to get back into Night City to both get revenge on a certain villain within the anime and to bring the show to the game full-sail via its rejuvenated modding scene, and that’s just nova.