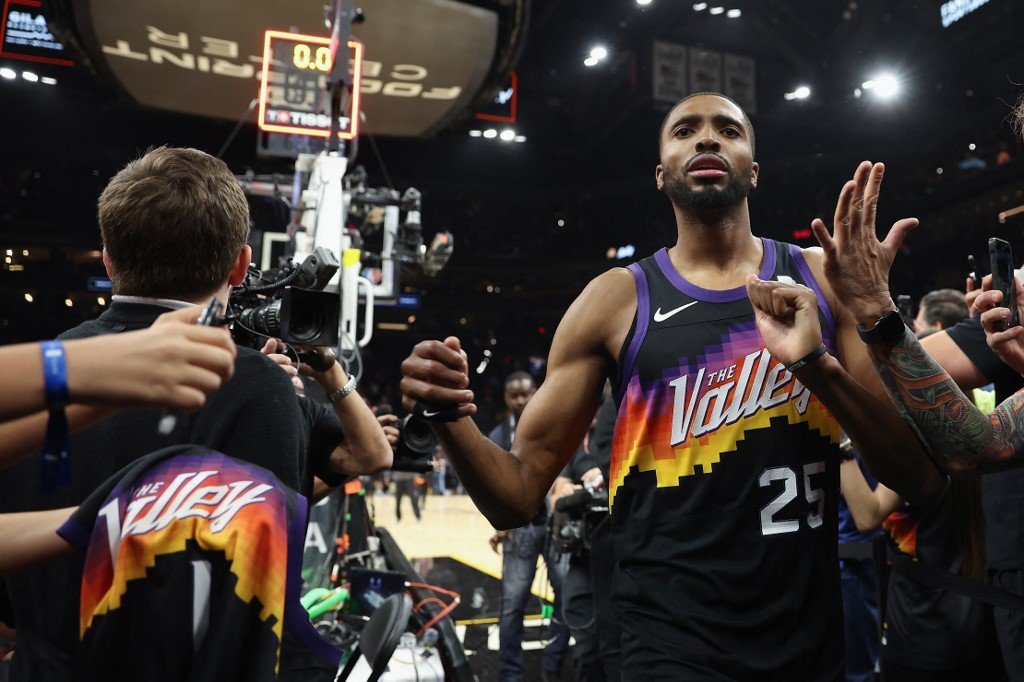 Mikal Bridges #25 of the Phoenix Suns high fives fans after defeating the New Orleans Pelicans in Game Five of the Western Conference First Round NBA Playoffs at Footprint Center on April 26, 2022 in Phoenix, Arizona. The Suns defeated the Pelicans 112-97. Christian Petersen/Getty Images/AFP

Deandre Ayton scored 19 points and Cameron Payne had 12 before fouling out for the top-seeded Suns, who can end the series with a victory in New Orleans on Thursday night.

The Suns, who had been outscored in the third quarter of each of the previous games and by an average of 11 points, played much better coming out of halftime.

Bridges made two 3-pointers and Crowder made one as Phoenix extended its 13-point halftime lead to 78-60 midway through the third.

Valanciunas scored six points to help New Orleans get within eight before Payne’s 3-pointer gave the Suns an 89-78 lead at the end of the period.

Phoenix twice built the lead to 13 points before Alvarado’s 3-pointer pulled the Pelicans within seven midway through the fourth quarter.

Paul had a basket and two free throws as the Suns pushed the lead to 104-93 with 3:27 remaining. New Orleans made just one field goal in the final 5:22.

In the first quarter, the Suns scored 18 points in the paint and had four steals among six Pelicans turnovers. Payne scored seven straight points during an 11-2 closing run that gave Phoenix a 32-20 lead at the end of the period.

The Suns increased the lead to 15 points before consecutive 3-pointers by Alvarado and McCollum pulled New Orleans within nine midway through the second quarter.

The Pelicans got within nine again on a jumper by Ingram, but 3-pointers by Bridges and Landry Shamet helped the Suns to a 59-46 halftime lead.