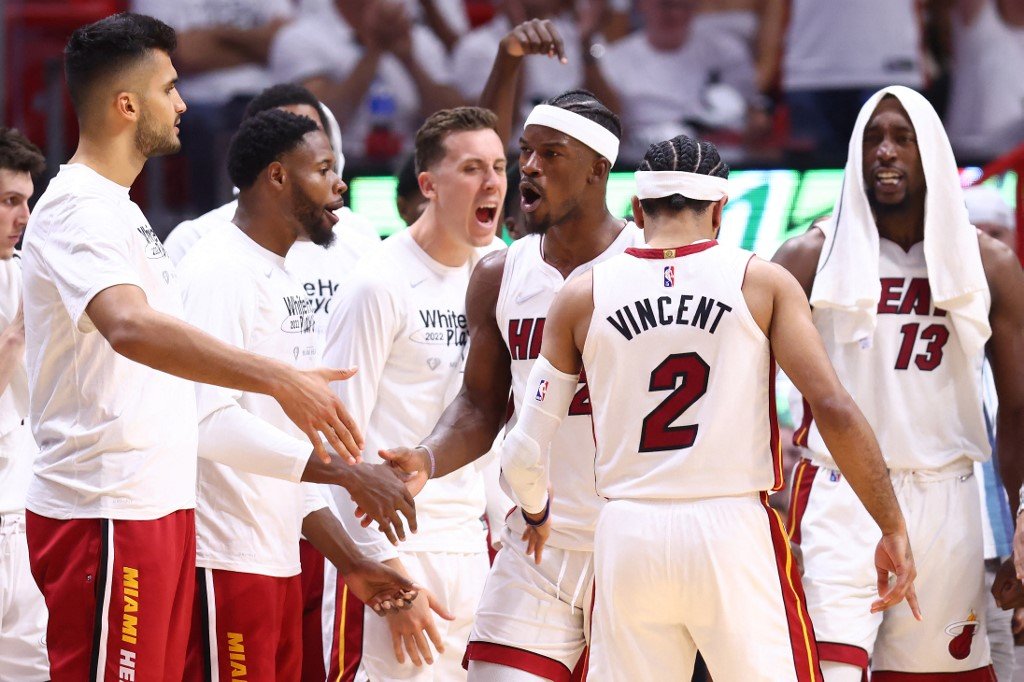 Jimmy Butler #22 of the Miami Heat celebrates with teammates after a foul and a basket against the Atlanta Hawks during the first half in Game Two of the Eastern Conference First Round at FTX Arena on April 19, 2022 in Miami, Florida. Michael Reaves/Getty Images/AFP

Jimmy Butler scored a career-playoff-high 45 points, including seven over a critical stretch in the fourth quarter, and the Miami Heat beat the visiting Atlanta Hawks 115-105 on Tuesday to take a 2-0 lead in an Eastern Conference first-round series.

Top-seeded Miami built a 16-point lead in the fourth quarter before eighth-seeded Atlanta battled back on the strength of Bogdan Bogdanovic’s playoff career-best 29 points, 19 of which he scored in the final period.

Bogdanovic connected on a 3-pointer with 3:15 remaining that pulled the Hawks to within 104-101.

Then Butler took over.

JIMMY BUTLER FOR 3 ON TNT.

Butler dribbled through the Atlanta defense on the ensuing possession to throw down a dunk. Following a Bogdanovic missed 3-point attempt, Butler scored falling away from beyond the arc.

He completed the decisive, 7-0 run attacking the rim for a layup that pushed the Miami lead to 10 points with 1:20 left.

The Hawks were much more competitive in Tuesday’s Game 2 than in Sunday 115-91 defeat on Sunday, thanks in part to an improved scoring effort from Trae Young.

The star guard scored just eight points in Game 1, a mark he passed by the end of the first quarter on Tuesday. Young went into halftime with 18 points, but Miami held him to just seven in the second half.

With Young shooting 2 of 10 from 3-point range overall, the Hawks sputtered to 12 of 40 (30 percent) from deep as a team. Bogdanovic finished 5 of 10 beyond the arc, and Kevin Huerter scored all nine of his points on 3-of-7 shooting from long range.

De’Andre Hunter scored 16 points for Atlanta, and John Collins recorded a 13 points and 10 rebounds while starting in place of injured Clint Capela (knee).

Tyler Herro contributed 15 points off the bench for Miami, and fellow reserve Gabe Vincent added 11. Max Strus went for 14 points and dished four assists, second on the Heat only to Butler’s five.