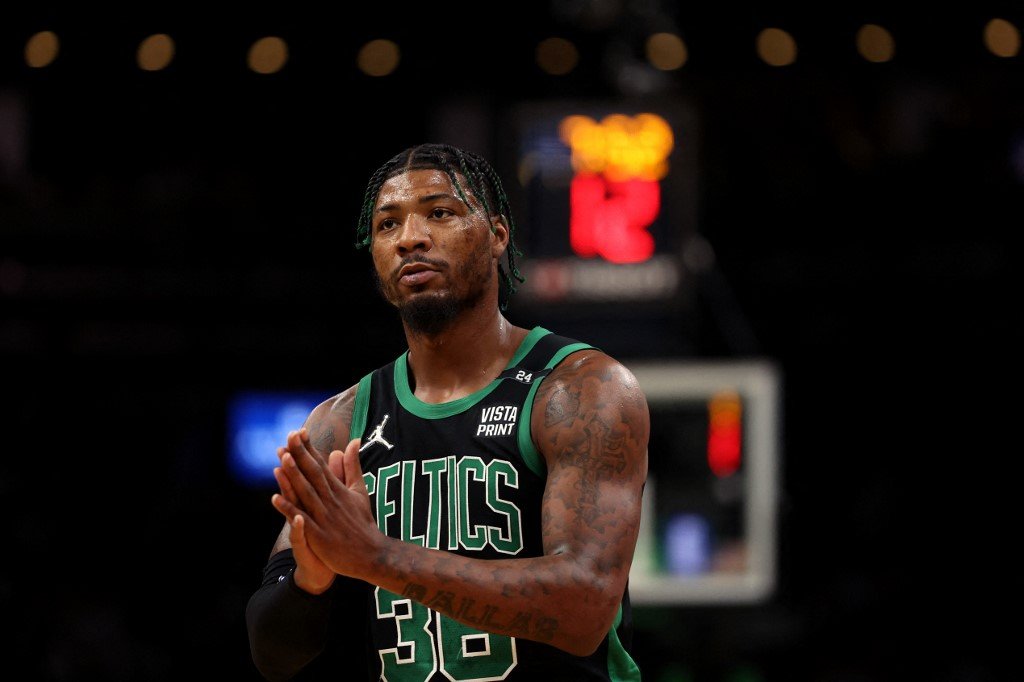 Marcus Smart #36 of the Boston Celtics reacts during the first quarter of Round 1 Game 1 of the 2022 NBA Eastern Conference Playoffs against the Brooklyn Nets at TD Garden on April 17, 2022 in Boston, Massachusetts. Maddie Meyer/Getty Images/AFP

Boston Celtics guard Marcus Smart notched a career highlight Monday when he was named the NBA’s Defensive Player of the Year.

Smart, an eight-year veteran, helped the Celtics lead the NBA in fewest points allowed per game (104.5), lowest opposing field-goal percentage (43.4) and lowest 3-point percentage (33.9). Boston finished with a defensive rating of 106.2, which was best in the league.

Really blown away tbh
Incredibly honored!
Just happy to be able to do get this award with our team and my brothers on the team.
This is for you mama! ❤️ I love you. pic.twitter.com/3xmhMluois

The 28-year-old Smart tallied 37 first-place votes and 257 points overall to win the award. He beat out top-five finishers Mikal Bridges of the Phoenix Suns (202 points), Rudy Gobert of the Utah Jazz (136), Bam Adebayo of the Miami Heat (128) and Jaren Jackson Jr. of the Memphis Grizzlies (99).

Smart is the first guard to win the award since Gary Payton in the 1995-96 season.

Marcus Smart of the @celtics receives the 2021-2022 Kia NBA Defensive Player of the Year Award from Gary Payton! #KiaDPOY

He is the first guard to receive the award since Gary Payton in the 1995-96 season. pic.twitter.com/kunKEW6ujj

“Definitely want to thank you guys, man, my coaching staff, my teammates,” Smart said in a video posted on social media by the Celtics. “It’s not easy playing in this league full of guys like Jayson (Tatum) and Jaylen (Brown), who score the ball the way they do, and getting the recognition on that defensive end trying to guard these guys every night. This is eight years, man, just trying to do what I do, you guys have allowed me to do that.”

Smart finished the regular season sixth in steals (119) and seventh in steals per game (1.68). He recovered 75 loose balls, tied for fourth in the league.