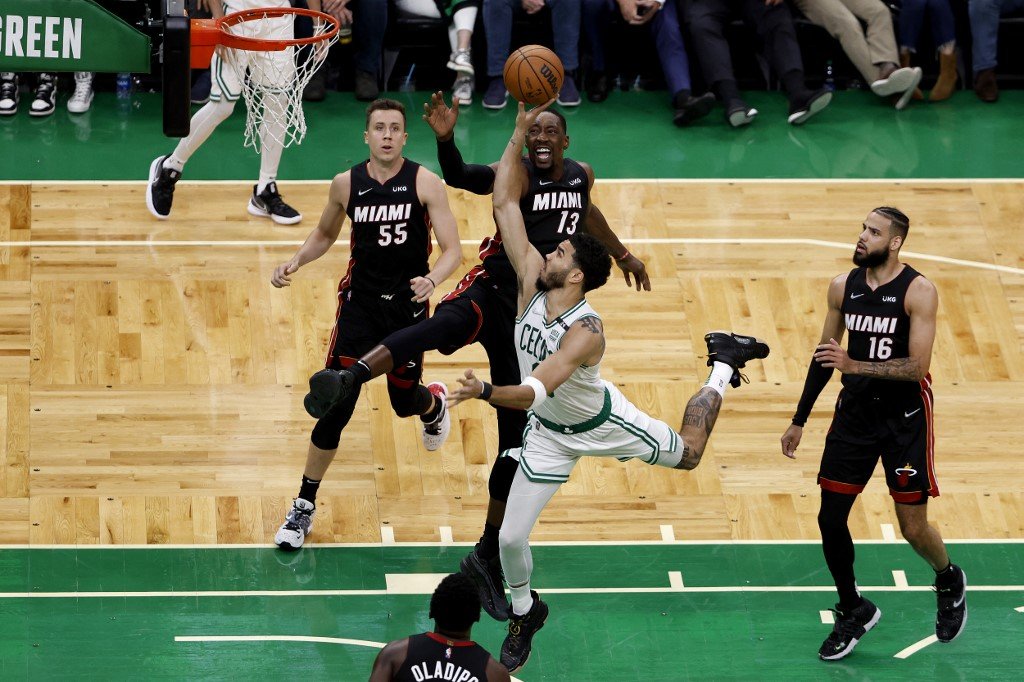 Jayson Tatum #0 of the Boston Celtics shoots the ball against Bam Adebayo #13 of the Miami Heat during the third quarter in Game Four of the 2022 NBA Playoffs Eastern Conference Finals at TD Garden on May 23, 2022 in Boston, Massachusetts. Winslow Townson/Getty Images/AFP

Jayson Tatum recorded 31 points, eight rebounds and five assists as the Boston Celtics dominated from the outset while notching a 102-82 victory over the visiting Miami Heat on Monday night to tie the Eastern Conference finals at two games apiece.

Tatum has 31 points through 3 quarters on ABC 🔥 pic.twitter.com/OOXDZbeDgr

Miami star Jimmy Butler had just six points on 3-of-14 shooting and struggled during 27 minutes of action. Butler departed after the first half of Game 3 on Saturday due to right knee inflammation.

Bam Adebayo scored just nine points for the Heat after putting up 31 in Game 3.

Game 5 of the best-of-seven series is Wednesday night in Miami.

Smart, who sprained his right ankle in Game 3, was ruled out approximately 70 minutes before tipoff.

The Heat shot 33.3 percent from the field and their starters scored just 18 points on combined 7-of-36 shooting (19.4 percent). Miami, which played without reserve Tyler Herro (groin), made 14 of 36 attempts from 3-point range.

The @celtics had the paint on lock, blocking 11 shots in Game 4! #BleedGreen pic.twitter.com/RRpLSvve8e

Boston connected on 39.7 percent of its shots and was 8 of 34 from behind the arc. The Celtics owned a 60-39 rebounding edge.

Boston came out strong and led by 17 before Miami made its first field goal. White scored the game’s first seven points and Tatum contributed nine during the burst.

The Heat finally converted on shot No. 15 when Oladipo buried a 3-pointer with 3:22 left in the period.

Miami finished the quarter with 3-of-20 shooting and trailed 29-11.

The Celtics continued to dominate in the second quarter and increased the gap to 50-23 on two free throws by Williams with 3:55 left. Boston led 57-33 at the break behind 24 points from Tatum, who tallied just 10 on 3-of-14 shooting in Game 3.

The Celtics increased the lead to 32 when Horford made two free throws to make it 69-37 with 7:26 left in the third quarter. Boston led 76-52 entering the final stanza and remained comfortably ahead throughout the period.