Nadal out of Wimbledon with abdominal injury, Kyrgios into final 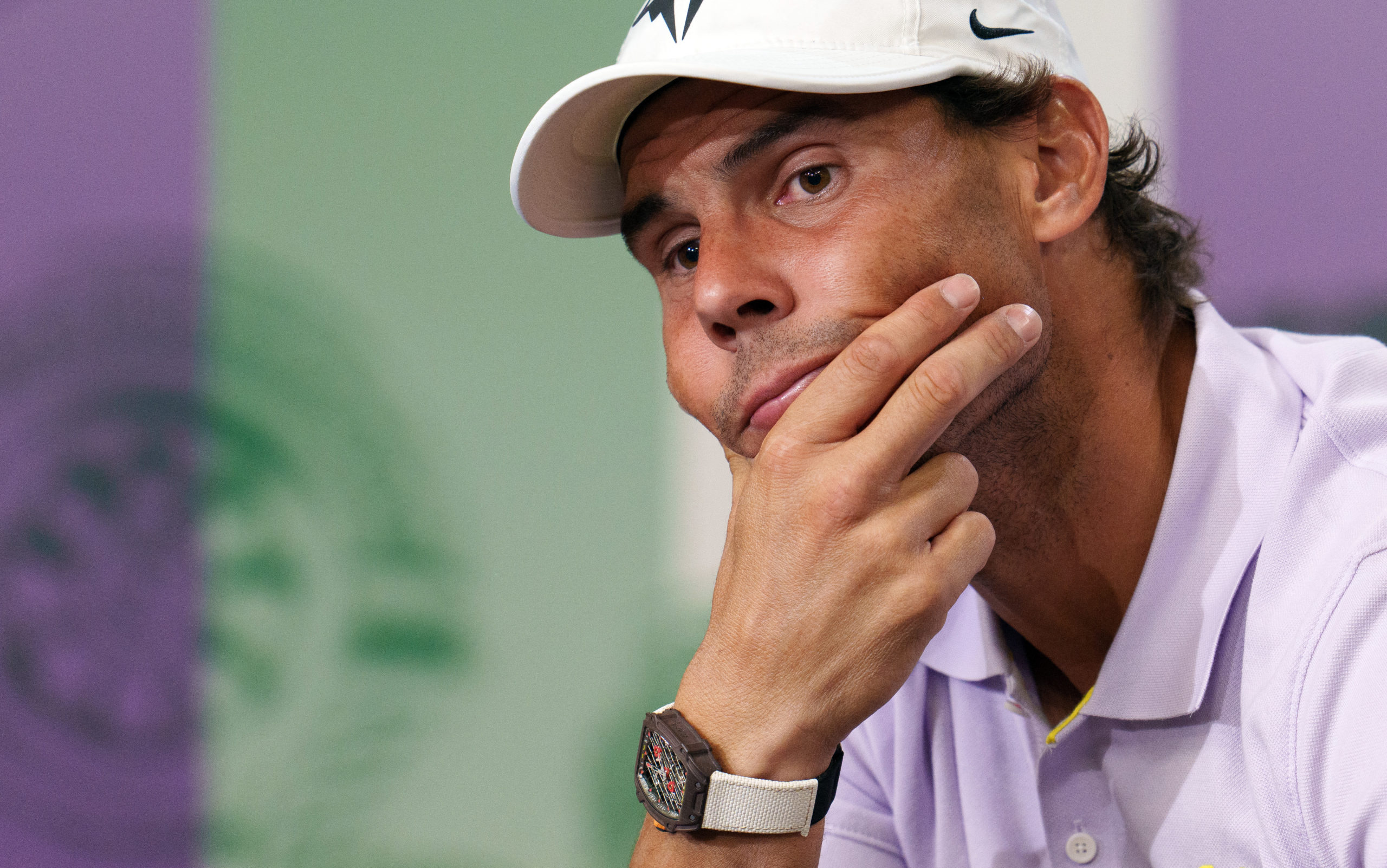 Spain’s Rafael Nadal holds a press conference on the eleventh day of the 2022 Wimbledon Championships at The All England Tennis Club in Wimbledon, southwest London, on July 7, 2022. Nadal announced today that he is withdrawing from Wimbledon after failing to recover from an abdominal injury. (AFP)

LONDON – Rafael Nadal announced Thursday that he was withdrawing from Wimbledon after failing to recover from an abdominal injury, ending his hopes of a calendar Grand Slam.

Semi-final opponent Nick Kyrgios will receive a walkover into Sunday’s final, where he will play either top seed and six-time champion Novak Djokovic or Britain’s Cameron Norrie.

Nadal, a 22-time Grand Slam champion, was visibly in pain during in a gruelling five-set win against 11th-seeded American Taylor Fritz on Wednesday.

Spanish sports daily Marca earlier Thursday reported that Nadal had a “seven-millimetre” tear to his abdomen but still intended to play.

But the 36-year-old scheduled a press conference later in the day at the All England Club at which he confirmed he was withdrawing.

“Unfortunately as you can imagine I am here because I have to pull out from the tournament,” said the two-time Wimbledon champion.

“As everyone saw yesterday I have been suffering with a pain in the abdominal and something was not OK there. That is confirmed, I have a tear in the muscle.”

The Spaniard said he had been weighing up what decision to make all day.

But he said: “It doesn’t make sense to go (on), even if I try through my career to keep going. It is very tough circumstances but it is obvious if I keep going the injury will be worse and worse.”

Nadal was given pain relief during the contest and had a medical time-out in the second set, admitting his father and sister had been gesticulating for him to quit.

He practised at Wimbledon on Thursday afternoon but, in his 7.20 pm (1820 GMT) press conference, he admitted he was unable to continue.

His decision to pull out ends his hopes of winning all four majors in the same year after his victories in the Australian Open and French Open this year.

The last man to achieve the calendar Grand Slam was Rod Laver, in 1969.

Nadal, who said his injury prevented him from being able to serve properly, added: “I never thought about the calendar Slam, I thought about my diary and my happiness.

“I make the decision because I don’t believe I can win two matches under the circumstances. It is not only I can’t serve at the right speed, it is I can’t do the normal movement to serve.

“After that to imagine myself winning two matches, and for respect for myself in some way, I don’t want to go out there and not be competitive enough to play at the level I need to play to achieve my goals.”

Nadal was bidding to win his 23rd Grand Slam title and equal Serena Williams in second place on the all-time list for most Grand Slam singles titles. Margaret Court is the leader on 24 titles.