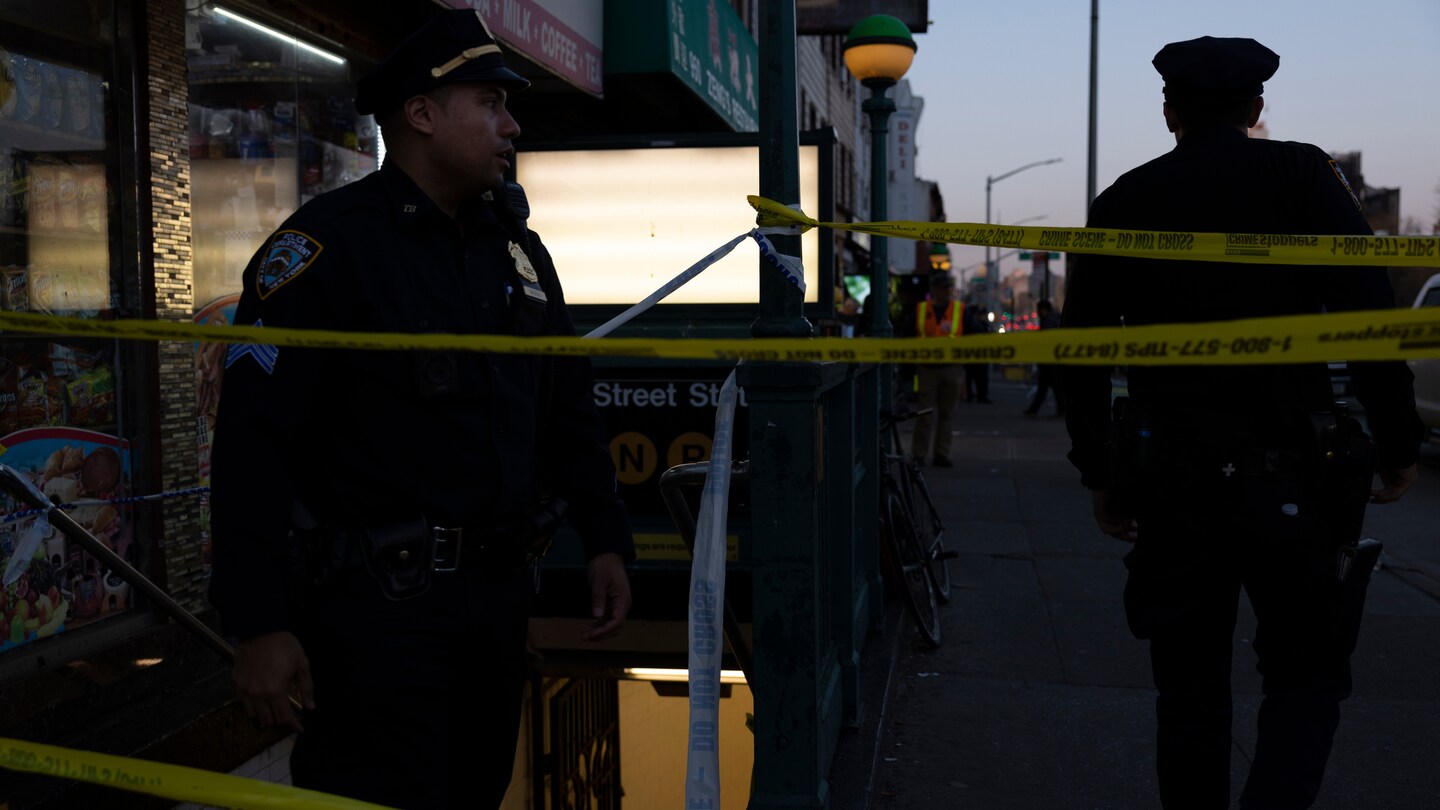 Days after a gunman opened fire in a New York subway train, shooting 10, city officials are scrambling for new ways to protect riders.

Mayor Eric Adams has suggested using emerging technology to screen passengers for guns. He has also pondered adding metal detectors at some entrances, which could create unwieldy bottlenecks in the country’s largest transit system.

Adams’s struggle underscores the challenge leaders face as they try to combat a rise in violence on subways. Across the country, researchers say, crime on public transit is up. And a string of high-profile incidents have left riders on edge, even as many systems struggle to address pandemic-related ridership declines.

In Washington, a man was shot in the leg aboard a Metro train in November. Another was fatally shot a month later in front of a D.C. station. In January, a 40-year-old woman was pushed in front of an oncoming New York subway train by a man with a history of violence and mental health issues. A teen shot another teen on a Northwest D.C. station platform in February, and in March, a man shoved another onto the tracks of the Los Angeles Metro, causing a head injury. Early this month, a Metro Transit Police officer in D.C. shot and wounded a man Metro officials said had stabbed a person on a Southeast D.C. train platform.

Nonviolent crime is rising, too. Through April 10, robberies in the New York transit system have surged 71 percent this year compared with the same period last year, according to the New York Police Department’s transit bureau records. Felony assaults are up 28 percent and grand larceny has shot up 110 percent.

In 2021, there were 3,918 complaints of crimes — including assaults, burglaries, harassment, sex crimes, robberies, rape and a few other categories — on New York transit, a 14 percent jump from the previous year.

Clashes between police and fare evaders and a growing number of attacks on bus operators, station managers and other transit workers have also added to the sense of unease among many public transit users.

Man charged in Brooklyn subway attack will be held without bail

Planned attacks like the one allegedly carried out by 62-year-old Frank James on Tuesday in Brooklyn are difficult to prevent. But former transportation officials, transit police officers and crime analysts said an increased presence of uniformed police officers at stations and aboard trains could disrupt violence.

In 2019, along with Gov. Andrew M. Cuomo, Feinberg called on Mayor Bill de Blasio to increase the number of officers in the subway — a controversial request during a period when police were being criticized for aggressively removing fare evaders from stations.

The NYPD said at the time that about 2,500 officers were assigned to patrol the subway, Feinberg said. But she believed that only a fraction of them regularly patrolled the system.

De Blasio — citing NYPD statistics showing a drop in crime — was resistant, as were civil rights activists and Black and Latino riders who worried that more cops in stations and trains could result in the over-policing of minor violations such as fare evasion without reducing serious crime. Feinberg said she shared their concern, believing that no one should be ticketed or arrested for fare evasion.

In December 2019, the MTA board took the unusual step of using $250 million that could have been spent to improve service to hire 500 additional MTA police officers to work in the subway and other parts of the transit system. Though this action bypassed the mayor, transit officials said it was necessary to reduce crime, and also gave them control over what officers focused on in trains and stations.

As crime increased in rail stations, MTA leaders continued to push de Blasio for more police, Feinberg said. After two people were killed and two others injured during a 14-hour stabbing rampage in February 2021, his administration sent 500 additional officers into the subway. But Feinberg said she didn’t think that was enough.

De Blasio called the transit authority chief’s continued drumbeat “laughable,” and said it was part of Cuomo’s political strategy to deflect from the crisis he was facing. But shortly after, de Blasio responded to another spate of subway stabbings by assigning 250 more officers to the transit system.

In her tenure, Feinberg said, the increases were short-lived. Adams, a former transit police officer who promised a return to law and order in his campaign, had pledged to make that commitment.

After this past week’s shooting, he said he would double the number of officers in the subway system, only to say Thursday that the NYPD would pull back some of those resources because the suspect had been captured.

“I’m not an expert on patrolling,” Feinberg said. “I’ll leave the number to somebody else. I want to be clear that I don’t think that’s the only solution. But I certainly think that a more robust, uniformed, respectful, diligent, disciplined number of officers is needed.”

In New York, subway attack adds to fears that city has grown dangerous

“Crime did seem to move to places where uniformed police officers and marked patrol cars were not patrolling or on a stationary assignment,” said Delinski, who was a D.C. Metro Transit Police officer for 25 years and last served as deputy chief of operations.

Dorothy M. Schulz, a retired police studies and criminal justice professor at the John Jay College of Criminal Justice, said she believes rising crime is due to pullbacks in patrols and staffing that departments have made in response to the police murder of George Floyd in 2020. Rampant fare evasion, as well as political division over whether to police it, has also helped create an atmosphere of “disorder” in subways, she said.

“I think that more officers would discourage some of the behavior,” said Schulz, a retired captain with the Metro-North Commuter Railroad Police Department in New York. “What we’re seeing across the country — and I don’t think it’s because of the pandemic specifically — but there’s this whole sort of idea that people can do whatever they want to do.”

But critics say the subway has enough police. Danny Pearlstein, spokesman for the Riders Alliance, a New York-based advocacy group focused on making transit systems more reliable, accessible and affordable, said the NYPD’s own figures last fall showed that roughly 10 percent of the police force was already patrolling the subway to address less than 2 percent of reported crime the department handles.

Pearlstein warned against overreaction, noting that Monday’s attack was the worst subway shooting in more than 40 years. “Events like these are exceedingly rare,” he said.

Civil rights leaders have also argued that people of color are disproportionately targeted by police officers on the subway. In 2020, the New York state attorney general launched an investigation into whether police were discriminating against people of color while policing fare evasion.

Many transit workers, however, have called for more protections. Union representatives point to significant increases in hostile attacks on bus operators, station managers and other transit workers.

“It is very frustrating, because it’s every day, and it’s getting worse,” said John Costa, the international president of the Amalgamated Transit Union, the largest transportation workers guild in North America.

Since the start of the pandemic, the union has tracked at least 110 threats or violent attacks on transit workers using mostly news reports. Costa expected the number of attacks to go down as the pandemic dragged on, but he said the union has been fielding more reports now than it had been.

“I don’t know if there’s not enough people or that’s part of the combination,” Costa said. “Maybe because we’re not full capacity, people are just acting any way they want toward somebody and not worrying about [anybody] stepping in.”

In D.C., Metro Transit Police said last summer that low ridership was contributing to reports of indecent exposure doubling during the first six months of the year compared with the first half of 2019. The surge prompted Transit Police Chief Ronald A. Pavlik Jr. to ask the Metro board to approve a policy that allowed police to temporarily ban suspects arrested on suspicion of sex crimes or weapons charges from the D.C. area transit system.

Board members, however, killed the proposal after multiple protests in streets and stations led by civil rights activists, who said the policy gave the police force too much unchecked power.

As rail ridership continued to stall at about 20 percent of pre-pandemic levels, crime continued to surge. Through February, Metro Transit Police records show, 33 aggravated assaults had been reported compared with 13 after the first two months of last year. Pickpocketing saw a twofold jump while robberies and larcenies both rose. Crimes taking place in subway cars shot up by 56 percent.

But late last month, as the effects of the omicron variant and area covid restrictions began to ease, more offices reopened and more riders began commuting again on Metro. In recent weeks, Metrorail ridership has averaged 35 percent of pre-pandemic levels.

The increase in passengers has corresponded with a drop in reported crimes the FBI considers the most serious or “part one” crimes. Those crimes, which include aggravated assaults and robberies, are down 36 percent over the first four months of this year compared with the same time last year, Metro spokesman Ian Jannetta said.