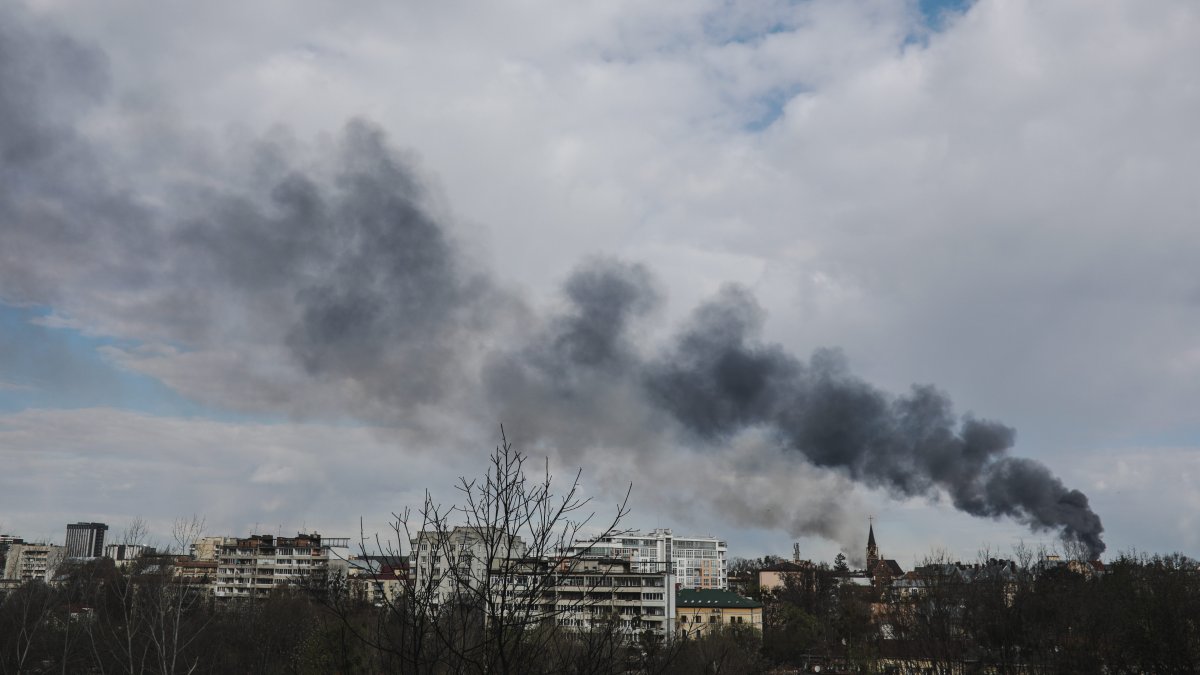 Multiple explosions apparently caused by missiles struck the western Ukrainian city of Lviv early Monday as the country was bracing for an all-out Russian assault in the east.

Six people were killed in the strikes, the regional governor reported, while another eight were wounded.

Maksym Kozytsky said there were four strikes, three of which hit military infrastructure facilities and one struck a tire shop. He said emergency teams were putting out fires caused by the strikes. He said one of the wounded was a child.

Ukrainian President Volodymyr Zelenskyy vowed to “fight absolutely to the end” in strategically vital Mariupol, meanwhile, where the ruined port city’s last known pocket of resistance was holed up in a sprawling steel plant laced with tunnels.

Plumes of thick, black smoke were rising over Lviv after the explosions, which were witnessed by AP staff. Lviv and the rest of western Ukraine have not been immune but have been less affected by the fighting than other parts of the country and have been considered a relative haven.

Lviv Mayor Andriy Sadovyi said on Facebook that five missiles struck the city and that emergency services were responding to the blasts.

Oleksandr Kamyshin, the chairman of the Ukrainian rail service, said earlier that strikes hit near railway facilities and that there were no known casualties. Train traffic has resumed with some delays, he said, vowing to restore the damaged network.

With missiles and rockets battering various parts of the country, Zelenskyy accused Russian soldiers of torture and kidnappings in areas they control.

The fall of Mariupol, which has been reduced to rubble in a seven-week siege, would give Moscow its biggest victory of the war. But a few thousand fighters, by Russia’s estimate, were holding on to the giant, 11-square-kilometer (4-square-mile) Azovstal steel mill.

“We will fight absolutely to the end, to the win, in this war,” Ukrainian Prime Minister Denys Shmyhal vowed Sunday on ABC’s “This Week.” He said Ukraine is prepared to end the war through diplomacy if possible, “but we do not have intention to surrender.”

Many Mariupol civilians, including children, are also sheltering at the Azovstal plant, Mikhail Vershinin, head of the city’s patrol police, told Mariupol television. He said they are hiding from Russian shelling and from Russian soldiers.

Capturing the city on the Sea of Azov would free Russian troops for a new offensive to take control of the Donbas region in Ukraine’s industrial east. Russia also would fully secure a land corridor to the Crimean Peninsula, which it seized from Ukraine in 2014, depriving Ukraine of a major port and prized industrial assets.

Russia is bent on capturing the Donbas, where Moscow-backed separatists already control some territory, after its attempt to take the capital, Kyiv, failed.

“We are doing everything to ensure the defense” of eastern Ukraine, Zelenskyy said in his nightly address to the nation.

As for besieged Mariupol, there appeared to be little hope of military rescue by Ukrainian forces anytime soon. Foreign Minister Dmytro Kuleba told CBS’ “Face the Nation” on Sunday that the remaining Ukrainian troops and civilians there are basically encircled. He said they “continue their struggle,” but that the city effectively doesn’t exist anymore because of massive destruction.

The relentless bombardment and street fighting in Mariupol have killed at least 21,000 people, by Ukrainian estimates. A maternity hospital was hit by a lethal Russian airstrike in the opening weeks of the war, and about 300 people were reported killed in the bombing of a theater where civilians had taken shelter.

An estimated 100,000 people remained in the city out of a prewar population of 450,000, trapped without food, water, heat or electricity.

Drone footage carried by the Russian news agency RIA-Novosti on Sunday showed mile after mile of shattered buildings and, on the city’s outskirts, the steel complex, from which rose towering plumes of smoke.

Russian forces, meanwhile, carried out aerial attacks near Kyiv and elsewhere in an apparent effort to weaken Ukraine’s military capacity ahead of the anticipated assault on the Donbas.

After the humiliating sinking of the flagship of Russia’s Black Sea Fleet last week in what the Ukrainians boasted was a missile attack, the Kremlin had vowed to step up strikes on the capital.

Russia said Sunday that it had attacked an ammunition plant near Kyiv overnight with precision-guided missiles, the third such strike in as many days. Explosions were also reported in Kramatorsk, the eastern city where rockets earlier this month killed at least 57 people at a train station crowded with civilians trying to evacuate ahead of the Russian offensive.

At least five people were killed by Russian shelling in Kharkiv, Ukraine’s second-largest city, on Sunday, regional officials said. The barrage slammed into apartment buildings. The streets were littered with broken glass and other debris.

Kharkiv Mayor Igor Terekhov, in an impassioned address marking Orthodox Palm Sunday, lashed out at Russian forces for not letting up the bombing campaign on such a sacred day.

Zelenskyy called the bombing in Kharkiv “nothing but deliberate terror.”

Here are five things you should know about Vitali Klitschko, the champion boxer who became the mayor of Kyiv, Ukraine.

In his nightly address to the nation, Zelenskyy also appealed for a stronger response to what he said was the brutality of Russian troops in parts of southern Ukraine.

“Torture chambers are built there,” he said. “They abduct representatives of local governments and anyone deemed visible to local communities.”

He again urged the world to send more weapons and apply tougher sanctions against Moscow.

Malyar, the Ukrainian deputy defense minister, said the Russians were pounding Mariupol with airstrikes and could be preparing for an amphibious landing to reinforce their ground troops.

The looming offensive in the east, if successful, would give Russian President Vladimir Putin a badly needed victory to sell to the Russian people amid the war’s mounting casualties and the economic hardship caused by Western sanctions.

Austrian Chancellor Karl Nehammer, who met with Putin in Moscow this past week — the first European leader to do so since the invasion Feb. 24 — said the Russian president is “in his own war logic” on Ukraine. In an interview on NBC’s “Meet the Press,” Nehammer said he thinks Putin believes he is winning the war, and “we have to look in his eyes and we have to confront him with that, what we see in Ukraine.’’

Zelenskyy also marked Easter on Sunday, saying on Twitter: “The Lord’s Resurrection is a testimony to the victory of life over death, good over evil.”

Chernov reported from Kharkiv. Yesica Fisch in Kramatorsk, Ukraine, and Associated Press journalists around the world contributed to this report.