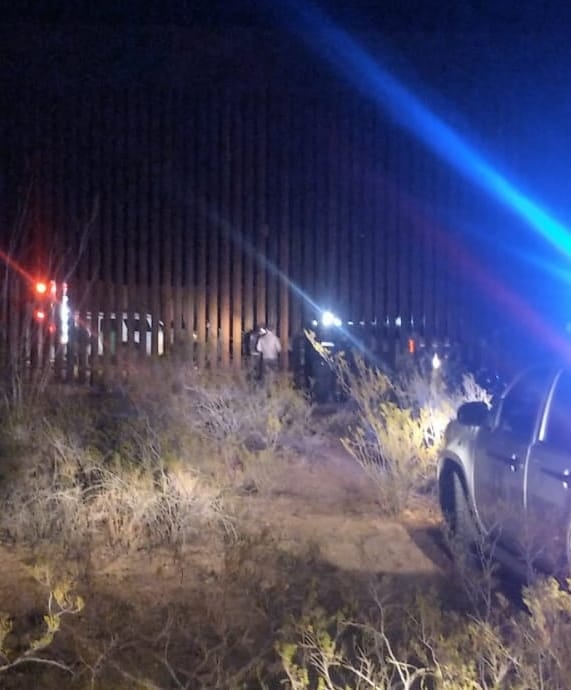 Federal agents made a gruesome discovery last week in Douglas, Ariz., when a woman’s body was found hanging from a towering wall along the U.S.-Mexico border.

The 32-year-old Mexican woman was found unresponsive and ensnared in the fence on the U.S. side of the border on April 11, the Cochise County Sheriff’s Office said in a statement. She was taken to a hospital, where she was pronounced dead.

Officials have not released the woman’s name.

The sheriff’s office responded to a call from U.S. Border Patrol agents around 11 p.m. Authorities believe the woman climbed to the top of the wall using a ladder and a harness similar to those used for rappelling. As she attempted to descend the U.S. side of the wall, authorities said, her foot and leg became ensnared, trapping her upside down “for a significant amount of time.”

The section of the border wall the woman attempted to scale was built during the Trump administration, Ricardo Pineda, head of the Mexican consulate in Douglas, told The Washington Post. The barrier is made of tall, vertical steel posts placed inches apart.

“That’s a part of the wall where the border bars are very high,” Pineda told The Post in Spanish.

Pineda and the Cochise County Sheriff’s Office confirmed the investigation is ongoing.

A backpack, socks and a metal ladder were found near the scene, images shared with The Post show.

The woman’s body was taken to the medical examiner’s office in Pima County. An autopsy revealed she died of traumatic asphyxia, Chief Medical Examiner Greg Hess told The Post.

It is unclear whether the woman was climbing the wall alone. Pineda said she had probably hired smugglers known as coyotes to help her cross — or unknowingly paid a network of human traffickers posing as coyotes.

“It’s very difficult for one person to carry a metal ladder, to place it” on the wall, Pineda said. “Generally, that’s not done by a person who does not know the terrain.”

Hess, who has examined bodies of migrants who have died trying to cross the U.S.-Mexico border, said the woman’s cause of death “is not common.” Pineda agreed.

“This is a deplorable event, because people without scruples put the lives of our nationals in danger and destroy families,” Pineda said. “… It’s the first time that I see an incident of this nature.”

Pregnant woman dies after falling from border wall, a sign of migrants’ desperation

The woman’s death marks at least the fifth in seven months at barriers along the U.S.-Mexico border. In December, a Mexican man appeared to be stuck at the top of the International Border Barrier near Sunland Park, N.M. He later fell and sustained significant head trauma from the fall, dying days later. In March, a 32-year-old pregnant Guatemalan woman was found unresponsive at the base of a border barrier near Tornillo, Tex. Both the woman and her baby were pronounced dead. Earlier this month, one Mexican migrant fell and later died while attempting to cross the border barrier near Clint, Tex.

According to a report, the Pima County Medical Examiner handled 215 deaths related to border crossings in 2021; the vast majority involved Mexican nationals.

The woman found dead on April 11 was originally from Sinaloa, Mexico, along the Gulf of California. She carried some identification documents that led authorities to her family in Sonora, Pineda said.

His office is waiting for the official autopsy results to be shared with the woman’s family before it can coordinate her repatriation. The consulate will cover those expenses, Pineda said.

“These types of incidents are not political, they are humanitarian realities that someone has lost a loved one in a senseless tragedy,” he said in a statement posted to Facebook, adding, “We have to do better in finding solutions to the challenges facing our border.”