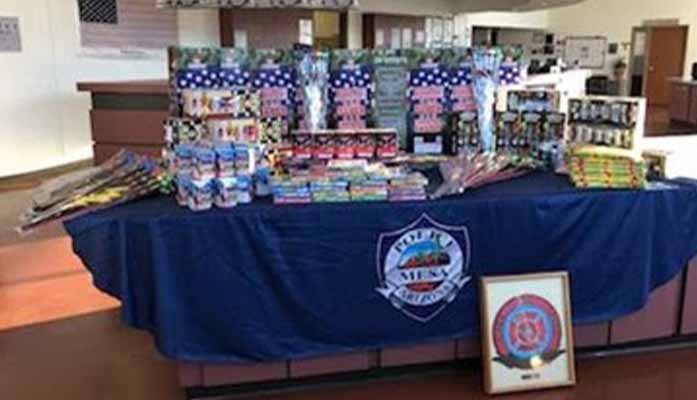 Over the past few weeks the Mesa Police Department, with assistance from the Mesa Fire/Medical Department, has seized large quantities of prohibited fireworks from two different locations in Mesa.

One of the seizures occurred in the area of 1200 N. Mesa Dr. in Mesa on 6-29-22. This investigation involved not only seizing large quantities of prohibited fireworks, but also led to the arrest of a suspect with a violent criminal history. This investigation began when a detective located an on-line add reference the sale of prohibited fireworks in Mesa. Detectives were able to purchase the illegal fireworks and later served a search warrant seizing 1665 packages of fireworks valued at $7,755.00 and two AR-15 rifles. The suspect, 40-year-old George Baber, was booked on Misconduct Involving Weapons/Prohibited Possessor and misdemeanor charges related to fireworks violations will be filed through the Mesa City Court.

The other seizure occurred at a Liquor/Smoke Shop located in the area of 300 W. Brown in Mesa. After receiving an anonymous tip of the store selling illegal fireworks Mesa Police Detectives opened an investigation. During the course of this investigation undercover detectives entered the store and visually saw the illegal fireworks on display and were able to purchase them from store employees. After the purchase was made a search warrant was executed on the store on 6-24-22. During the search warrant 129 prohibited fireworks with a total value of $4,052.00 were seized. There are pending criminal charges on the store owner.