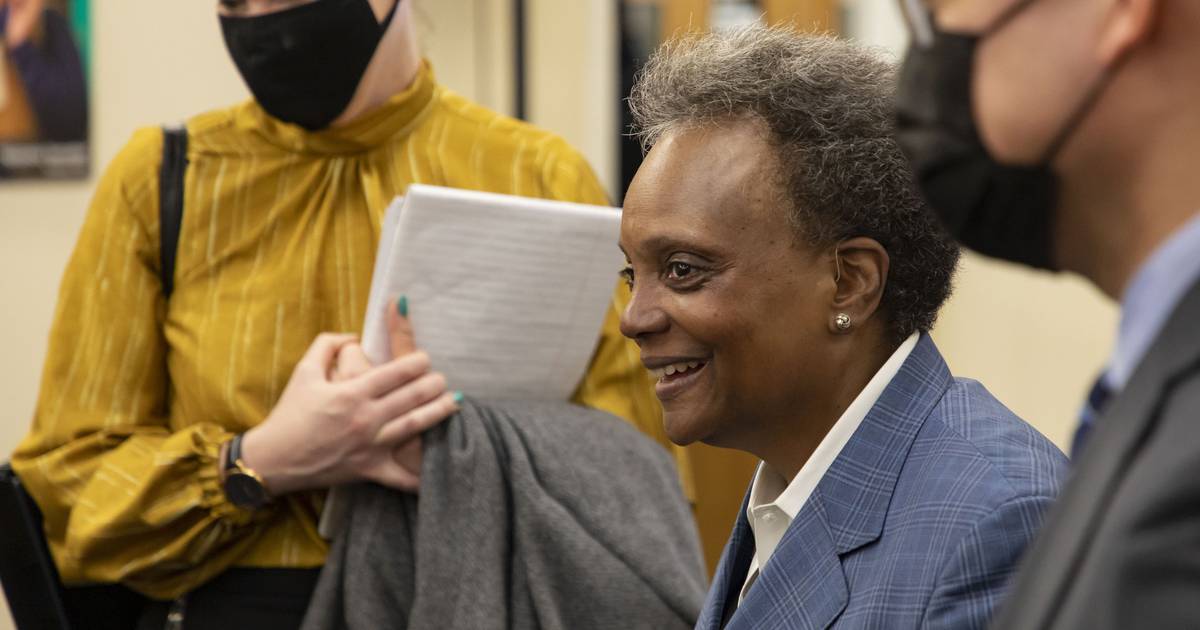 The plan to hand out 50,000 gas cards, worth $150 each, and 100,000 Chicago Transit Authority fare cards, $50 each, passed 26-23 despite reservations from several aldermen that it was a political stunt and would be largely ineffective. Lightfoot’s program, dubbed “Chicago Moves,” followed mayoral candidate Willie Wilson’s self-funded $2.2 million gas giveaways to drivers who camped out at gas stations.

“Some of our neighborhoods have intentionally been starved for no other reason than systemic racism,” Lightfoot said Wednesday before the City Council vote. “Should we not address that problem, solve it? We are a city. A city of neighbors.”

Ald. Raymond Lopez, 15th, who has also declared his candidacy for mayor in the 2023 election, dismissed Lightfoot’s plan before the vote: “To say it comes off as a gimmick would be an understatement.”

Wilson has announced he’ll run for mayor in February. Lightfoot has not formally declared but is widely expected to seek a second term.

Other aldermen expressed concern about the city subsidizing gas purchases, which they said was environmentally unfriendly, and argued that the money would be better spent on affordable housing or other needs.

Lightfoot brushed off the criticism that her program is a political stunt as “nonsense.” At one point, she brandished two $1 bills to emphasize that people are struggling financially.

Lightfoot also tried to shoot down hang-ups over the environment and public transit by saying the city was doing everything in its power to keep the CTA safe with more police and cameras, and that “back on planet reality,” many residents live in public transit deserts and need a car to get around.

“Am I solving every problem with this? Of course not,” Lightfoot said.

With Lightfoot expected to announce her campaign for a second term in the near future, her proposal called for spending $12.5 million in city money for the gas and public transit cards.

Facing pushback, Lightfoot amended her initial plan to direct the cards to lower-income households, dropping the income threshold to qualify from $140,000 to $93,200 for a family of four, and to ensure three-fourths of the $7.5 million in gas cards go to people from mobility-challenged neighborhoods. The cards will be distributed via lottery if more eligible households apply than the number of cards that are available.

For those who receive them, the cards will be distributed monthly from May through September. Applications opened immediately following the passage and can be found online at chicago.gov/city/en/sites/chicago-moves/home.html.

The measure passed with the support of three aldermen — Gilbert Villegas, 36th; Debra Silverstein, 50th; and Derrick Curtis, 18th — who voted against the ordinance in committee. Lightfoot made changes to her bill so more residents would be eligible.

In other action Wednesday, aldermen approved a tax break for a large residential building slated for just east of O’Hare International Airport, under a recent state law that grants incentives to housing developments that meet certain affordability requirements. The sole “no” vote came from the alderman whose 41st Ward contains the project, Anthony Napolitano, who has expressed qualms about the neighborhood becoming too congested.

Also, Lightfoot’s nominee for inspector general, Deborah Witzburg, was confirmed Wednesday after the previous head watchdog, Joe Ferguson, stepped down in 2021 and the seat was left vacant for months.

Additionally, a series of proposed ethics reforms was submitted by 43rd Ward Ald. Michele Smith and shipped to the council’s rules committee. They aim to strengthen the ethics rules that govern council members and would increase penalties for violations. The proposals arrive months after former 11th Ward Ald. Patrick Daley Thompson was forced to give up his seat after he was convicted of felony tax fraud. Two other council members, 34th Ward Ald. Carrie Austin and 14th Ward Ald. Edward Burke, await trials on separate federal corruption indictments to which both have pleaded not guilty.

New legislation on Wednesday included an ordinance submitted by Ald. Matthew O’Shea that would offer a death benefit to spouses of Chicago first responders who died by suicide. The provisions would include one year’s salary and a one-time payment ranging from $20,000 to $40,000, depending on family size.