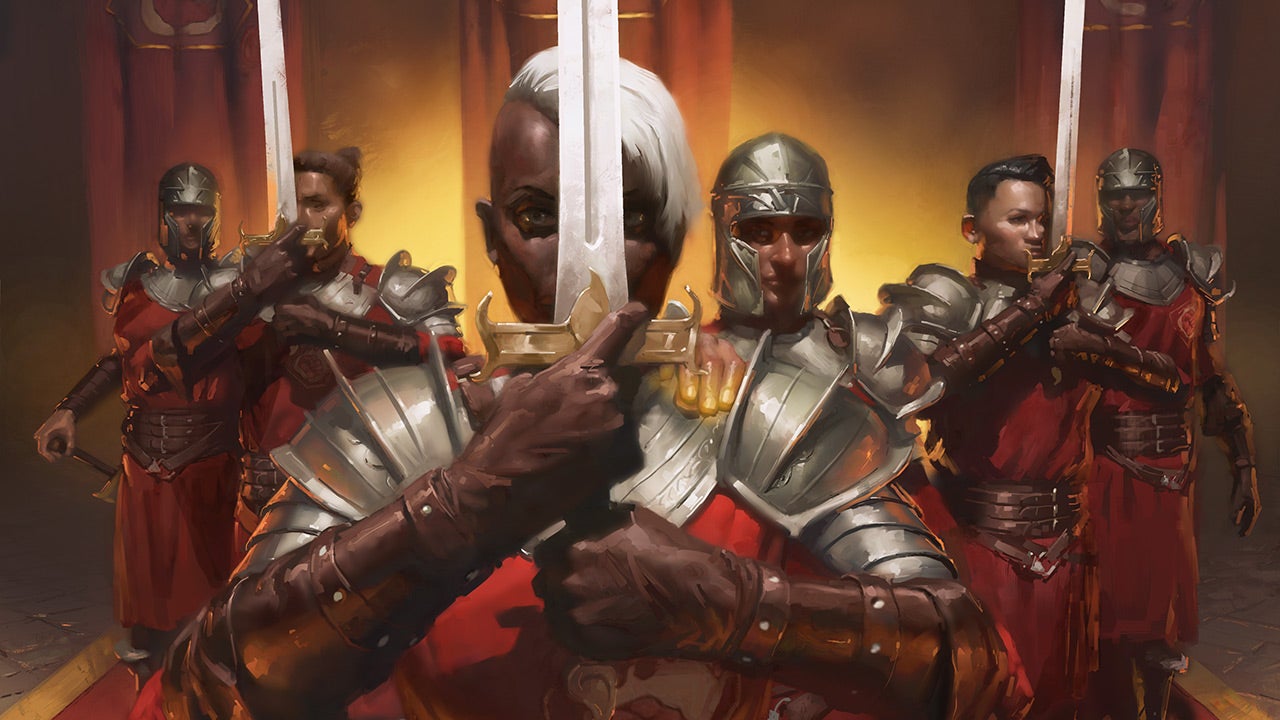 Battle for Baldur’s Gate sees Magic: The Gathering once again crossing over with Dungeons & Dragons (D&D), only this time, in the Commander Legends format. What is Commander Legends? Well, it first debuted in 2020, and combines the hugely popular Commander format with Draft. This means players take it in turns picking from a limited pool of cards to build the best deck they can. Unlike regular Commander, however, decks can contain multiple copies of a single card and are comprised of 60 cards instead of 100, and unlike Draft, synergies are easier to create, as players pick two cards at a time.

The last D&D set, Adventures in the Forgotten Realms (AFR), featured a host of classic D&D settings, characters and gameplay elements, and so too will Battle for Baldur’s Gate. Backgrounds, for instance, are a new type of enchantment, and will help represent your commander’s story so far and give them a bonus. Initiative, meanwhile, is a new keyword ability that ties into Undercity – a new dungeon card – as well as improving certain cards in the set if you have the initiative. Characters like Tasha the Witch, Elminster, and iconic duo Minsc and Boo are also featured. You can read about all the new mechanics here.

An example of a Background enchantment, taking the initiative and the new dungeon card.

It’s an intriguing looking set and a great match for two famous properties. I spoke to Game Designer Corey Bowen about returning to D&D for a Commander Legends set. “Dungeons & Dragons is a social game about collaboration. Commander is currently Magic’s greatest expression of a social game where winning isn’t everything. The union of these two social gathering-based games makes for a lot of harmony in this set,” he says. “Commander Legends sets usually need a wealth of legendary characters, too, so borrowing from a mostly untapped IP that is overflowing with characters and adventurers fits the bill as well.

“There are some ties between Adventures in the Forgotten Realms and Commander Legends: Battle for Baldur’s Gate,” he says, when I ask about links between the two. “The Dungeon mechanic and the d20-rolling mechanic both return, for instance. Commander Legends: Battle for Baldur’s Gate’s two-color themes were mostly built agnostic of the Adventures in the Forgotten Realms themes, but you’ll see parallels as they both are forming from similar source material. You’ll see rogues in UB and fighters in RW just as you’ve seen in AFR.”

I also ask about how Wizards of the Coast’s focus on world- and character-building changes when working with an existing property. “Many of the characters here are already defined with a history and a power suite,” Bowen explains. “There’s a lot of inspiration to pull from to make some very resonant and charming cards. But, that’s a bit of a double-edged sword. Sometimes there are card slots that need to be a specific thing that the character fit for that slot doesn’t provide. Or maybe the character’s power suite translates very poorly into Magic cards. In the first Commander Legends, it was easy to create, change, or adapt any character we wanted to. When working with an IP, there’s always a sacrifice to the resonance of the character’s story by changing an aspect of the card text — a sacrifice that doesn’t exist when we’re defining who that character is in our own IP.”

With all that background in mind, today we have a brand new card to reveal:

While high cost, Legion Loyalty’s use of the myriad keyword seems extremely powerful. I ask Corey Bowen about it. “I love myriad,” he says. “Giving your creatures myriad is awesome. Giving all your creatures myriad is REALLY awesome. One of the things I like about myriad is how many things it combos with — enter-the-battlefield effects, sacrifice outlets, token synergies, aggro strategies, you name it. There are a number of strategies you could use Legion Loyalty with. In this set, if I drafted this card early, I’d probably play some sort of WU dungeon deck and try to play the creatures that take the initiative when they enter play. With myriad, they’d each put me through the dungeon twice on attacking!”

Legion Loyalty also seems to be a good example of the kind of card design that’s possible in a “fun-first” format like Commander Legends. “I would argue that every set we make is ‘fun-first’ as the primary heuristic,” says Bowen when I posit this and ask about how the team’s card design philosophy changes. “For Commander Legends: Battle for Baldur’s Gate, the difference is that it doesn’t need to consider their cards in competitive formats. It’s also true that multiplayer games (and especially socially-oriented ones) are typically more tolerant of high-variance games. In a given set, if a specific combo is too reliable and easy to pull off, then it becomes a problem in that limited format and potentially the constructed competitive format. In this set, mixing and matching abilities on your commander and finding those niche combos among the giant set of cards is fun. Assembling those combos is a lot less reliable, so we don’t have to balance them too harshly for limited or a competitive constructed environment. There are also three opponents-worth of removal spells that are there to rein you in if you get too far ahead. So the format embraces large swings and big plays, which is a lot of the heart of Commander to me.”

Cam Shea has worked at IGN since before the before times, and has played more Breath of the Wild than just about any other game. When he’s not playing games he’s mixing records.