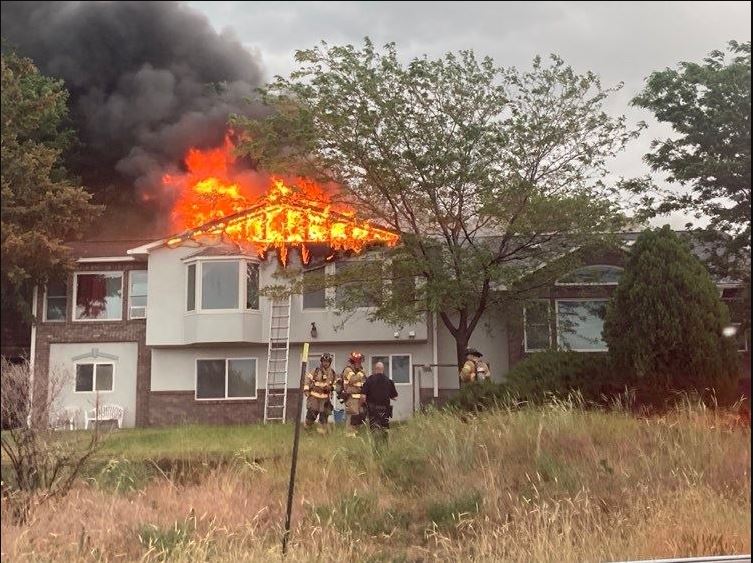 BONNEVILLE COUNTY, Idaho (KIFI) – Shortly after 5:30 p.m. Saturday, the Idaho Falls Fire Department (IFFD) and Bonneville County Sheriff’s Office (BCSO) were dispatched to the 6000 block of E. Panorama Drive in Bonneville County, Idaho after an individual saw smoke coming from the top of a house and called the Bonneville County/Idaho Falls Dispatch Center.

During the fire investigation, a neighbor reported witnessing a bolt of lightning hit near the home.
None of the occupants were home when the fire started. All pets, with the exception of two cats, fled from the home without injury before emergency personnel arrived. The two cats were later found by firefighters safe inside the garage after the fire was extinguished.

On arrival, firefighters reported a working fire in a large two-story home and heavy smoke and flames coming from the roof. Firefighters made entry and began pulling ceilings to access the fire, along with using hoses to fight the fire from inside the home. Others attacked the fire from the outside.
Crews say the wind, construction features, and the structure’s position made fighting the blaze challenging. Around 6:30 p.m. firefighters changed their offensive interior strategy to a temporary defensive exterior strategy while roof components failed from the fire burning in the attic. They then went back inside as conditions improved.

The home was a spit level home with several rooms, totaling approximately 5,000 square feet. The fire burned through both the second story roof and the lower level roof, extending to the attic and throughout every room on both levels before it was knocked down at approximately 6:40 p.m. The basement had significant water and smoke damage.
One firefighter was taken to the hospital with minor injuries where he was later treated and released. No one else was injured.

A fire investigator from IFFD’s Fire Prevention Division officially determined the cause of the fire was from lightning. Damages were estimated at approximately $600,000 for the structure and $200,000 for the contents inside the home.

Operations personnel remained on scene for several hours making sure the fire was completely extinguished and there were no hot spots. The Law Enforcement Chaplaincy of Idaho responded to the scene to help those displaced from the fire. The home is uninhabitable. The Red Cross was also notified.