Johnny Depp and the guilty scroll 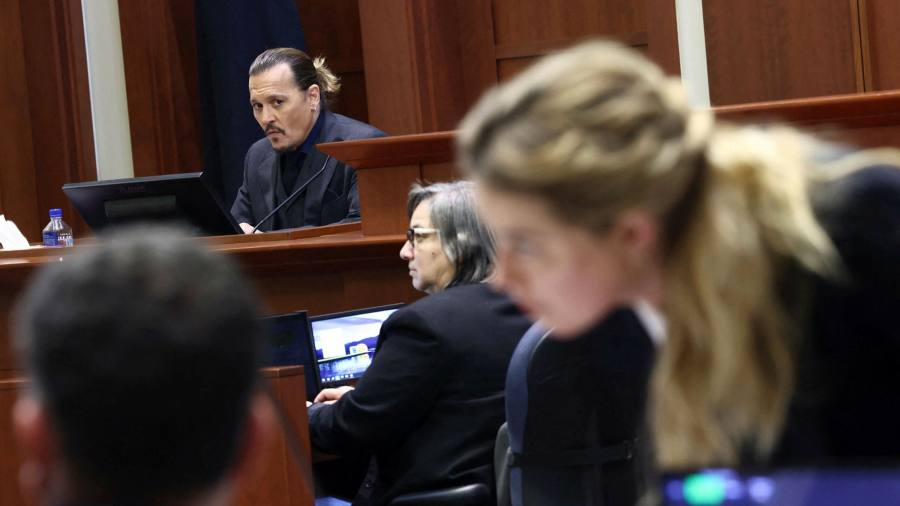 If you want a glimpse of a world of confusion, nihilism and debasement, I urge you to visit Fairfax County Courthouse, Virginia, for a while. There, you can watch proceedings as Amber Heard is sued for libel in a case brought by the actor Johnny Depp. Depp is suing his former wife for $50mn over an op-ed in which she claimed to be a victim of domestic abuse. The piece was published in the Washington Post in 2018, in which Heard described her experience of sexual violence and harassment as well as “feeling the full force of our culture’s wrath for women who speak out”. Depp was not actually named.

Depp has already fought a libel case at the High Court in London: he sued the Sun newspaper for labelling him a “wife beater” in 2020, and lost. In this second suit, he has thrown his weight behind a legal argument that leaves no inch of their squalid domestic life undiscovered. Heard, in turn, has counter-sued for $100mn, and provided recordings and videos that seek to prove the violence she says she endured.

No one is a winner in the sordid, unedifying spectacle which is now playing out on television and on social-media platforms everywhere. But for those unused to seeing live court coverage, as we are in Britain and in much of Europe, the spectacle of seeing one of the most famous actors of his generation describe a life of drug use, drinking and Rabelaisian dissolution makes it near impossible to ignore. It’s become my go-to guilty scroll.

Evidence of Depp’s dependencies, his lack of cogency and brutal text exchanges show he was rarely Partner of the Year. Even so, his extraordinary charisma, his charm, his courtroom doodles, and his manner — a kind of Keith Richards meets Renaissance prince persona — have already won much of the social-media jury to his side.

No wonder TikTok is happy to acquit him of all wrongdoing; to admit Depp was abusive would be a damning incrimination of ourselves

Regardless of the outcome of the case being overseen by Judge Penney Azcarate, whose demeanour conveys total mystification at the shitshow over which she now presides, the court of TikTok has had no compunction when offering a verdict. One of the first big celebrity cases to play out on social media, it has generated a tsunami of hot takes about the trial. And no one is impartial: #JusticeForJohnnyDepp has had near 10bn views on TikTok, while a similar hashtag for Heard has reached only 37mn. Meanwhile, the platform has produced a slew of defamatory content about the actress and every sentence of her testimony has been reviewed, recreated and re-enacted for viewers’ sport.

TikTok’s Community Guidelines prohibit “content that disparages victims of violent tragedies”. In the event of abusive behaviour its policy states: “We remove expressions of abuse, including threats or degrading statements intended to mock, humiliate, embarrass, intimidate or hurt.” TikTok says that it has removed several videos about Heard that have violated its anti-bullying policies, and says it will continue to enforce them. But anyone so much as glancing at the current footage must know that any attempt to moderate the content is just whistling in the wind.

The courtroom has become a social-media circus, primed to activate the viral meme. And notwithstanding the seriousness of the allegations, nor how triggering this trial may be for the estimated one in four women whom the women’s aid charity Refuge say will experience domestic violence at some point in their lifetime, there is no question that the ancillary details that make up the court case have been compelling. Depp’s long-term Scottish bodyguard Malcolm Connolly has been subject to a string of media profiles since he took the witness stand. A natural stand-up, when asked if he could recall whether he had seen the actor urinating in a hallway his response reduced the room to tears. Neither will I ever drink a substantial glass of alcohol in future without recalling Heard’s attorney’s description of Depp’s “mega pint of red wine”. The comment is now available on T-shirts, has become an internet “challenge” and is the subject of a hashtag that has been used 122mn times.

Meanwhile, Depp’s seduction of social media has only further complicated the thorny issue of our attitudes towards abuse. His eccentric elocution, excesses and explosions are certainly symptomatic of an abuser — he has made no secret of his addictions in the court case. But his personality defects and wilder nature are precisely the characteristics on which he built a billion-dollar career. No wonder TikTok is happy to acquit him of all wrongdoing; to admit Depp was abusive would be a damning incrimination of ourselves. We relish the entertainment value of deviants such as Jack Sparrow, the Big Bad Wolf or the cocaine smuggler George Jung (all heroes of Depp’s oeuvre), regardless of the pain they cause.

As an exercise in who is guilty here, we should probably look more unkindly on ourselves. We built the culture which turned Depp into a “legend”, and now we’re responsible for propping up the scaffolding of blame. It’s grim, depressing and debasing. And I watch it with a nag of shame. But I’m still going to keep on scrolling, and pour another mega pint of wine.

Why Grey’s Anatomy Fans Think Justin Chambers May Be Returning