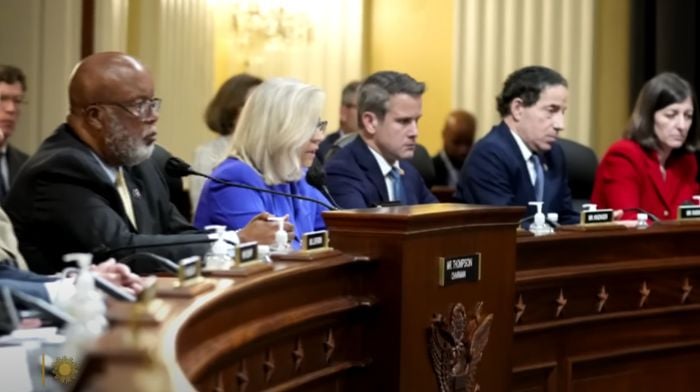 In what is not a shocking move, the House select committee on January 6 announced on Thursday that it is considering criminal referrals against former President Donald Trump, former White House chief of staff Mark Meadows, and possibly three other Trump associates in relation to the events of January 6, 2021. The January 6 committee is comprised of just two Republicans, Liz Cheney (R-WY) and Adam Kinzinger (R-IL), and seven Democrats.

Committee Chair Rep. Bennie Thompson (D-MS) stated that the committee would meet virtually this weekend, and decisions on the referrals are expected to be made then.

Others who might be on the list for criminal referral include former Trump legal adviser John Eastman, Trump’s former personal attorney Rudy Giuliani, and former Department of Justice official Jeffrey Clark. Any referrals made by the Committee are merely recommendations and have no legal binding on the Justice Department or any other government agency.

Rep. Jamie Raskin (D-MD), who is on the subcommittee suggesting referrals and on the January 6 committee, said, “We want to make sure no one slips through the cracks. We want to make sure that the key organizers and movers of this attack don’t escape the scrutiny of the justice system. I think anyone who engages in criminal actions needs to be held accountable for them and we’re going to spell that out.”

I Guess The BS Jan 6 Committee Knows now the Election was stolen and we had a right to protest —RIGHT??

What Will January 6 Criminal Referrals Be Based On?

The January 6 committee contends that each one of Trump’s allies played a role in the so-called attempt to overturn the result of the 2020 presidential election.

With respect to Eastman, the committee claims his role was to suggest a legal theory that would allow Vice President Mike Pence to block certification of the election. That theory was completely rejected by White House attorneys and allies of Pence and was never initiated.

The committee’s allegations against Clark are even more dubious. The committee says it was Pennsylvania Rep. Scott Perry who linked Clark to the Trump White House in December of 2020. Testimony from witness Cassidy Hutchinson, a low-level aide to Meadows, claimed that Perry wanted “Mr. Clark – Mr. Jeff Clark to take over the Department of Justice.”

A report from CNN called Giuliani “a lead architect” in the events of that day. Giuliani’s initial subpoena alleges that the former New York City mayor was communicating with Trump and House members “regarding strategies for delaying or overturning the results of the 2020 election.”

The phony Jan.6 committee are lookin real stupid right about now. Americans are finally seeing why so many voters felt robbed in the 2020 elections. Its because they were!

January Committee Looking into Criminality since 2021

While these criminal referrals in relation to January 6 were just announced, the committee’s search for anything to pin criminality on has gone on for some time. As far back as December 2021, the Committee threatened Mark Meadows with criminal contempt of Congress.

In October of 2021, Meadows had initially said he would not cooperate with any subpoenas, but in December did an about face and said he would. Meadows then flip-flopped again and sued the Committee, asking a federal court to block the subpoena.

The Committee has also had its sights set on House Minority Leader Kevin McCarthy (R-CA) for some time. In January, Thompson sent a letter to McCarthy asking him to voluntarily come before the Committee. McCarthy declined to cooperate and called the Committee “illegitimate.”

Rep. Jim Jordan (R-OH) was also issued a subpoena, to which he penned a strong response questioning the committee’s “constitutionality and validity.”

The January 6 committee, however, may have finally had the tables turned on them.

Just last week, we reported that McCarthy sent a letter to the Thompson instructing the committee to preserve their documents. McCarthy’s notice is a good indication that the January 6 committee itself will be the focus of an investigation for the incoming GOP-led House in January 2023.

Jan 6 Circus Committee Staffer “We all came from prestigious jobs, dropping what we were doing because we were told this would be an important fact-finding investigation that would inform the public. But [the committee] became a Cheney 2024 campaign”
WASHINGTON POST