James and Jennifer Crumbley may seek to have trial moved from Oakland Co. 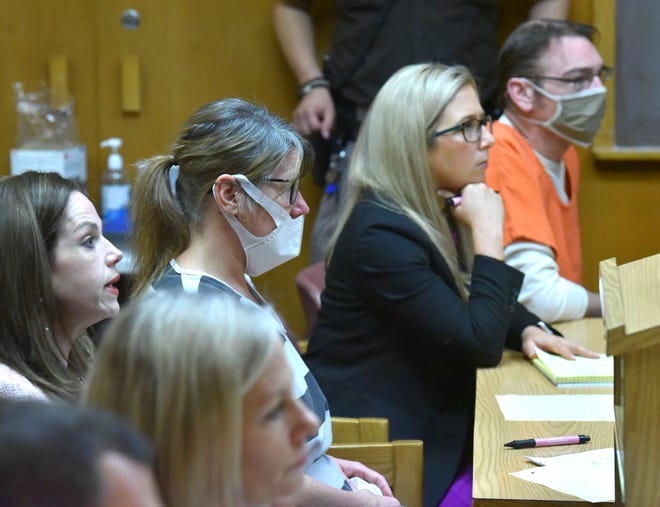 Pontiac – Attorneys for the parents of a teen charged in the Nov. 30 mass shooting at Oxford High School may ask for a change of venue, they told Judge Cheryl Matthews at a pretrial hearing Tuesday.

Shannon Smith, who is representing Jennifer Crumbley, told Matthews the defense expects to file as many as 10 motions ahead of an Oct. 24 trial date on various issues, including for the release of medical or psychological records of the couple’s 15-year-old son, Ethan.

Ethan Crumbley is charged with killing four students and wounding six others and a teacher, and is being tried separately. His attorneys have indicated they plan an insanity defense on his behalf.

Smith and Mariell Lehman, who is representing James Crumbley, asked Matthews to reduce the parents’ bonds from $500,000 to $100,000. While the judge said “the probability of conviction was too difficult to gauge or predict,” their decision not to immediately turn in themselves last fall once they were charged led her to deny the request.

Their attorneys had argued the couple has wrongly been portrayed as a flight risk and that their bonds should be reduced to $100,000. Smith said they will appeal the bond issue to the Michigan Court of Appeals. The couple had twice previously been denied lower bonds.

Matthews, in explaining the various criteria she considered in weighing the request for reduced bonds, said the Crumbleys sold their Oxford home to pay legal costs. The home sold for $150,000, according to Zillow.

James Crumbley, 45, and Jennifer Crumbley, 44, were escorted into the courtroom separately shortly after 10 a.m. as five deputies and 20 others looked on. The couple were masked and wore jail garb and belly chains.

Each is charged with four counts of involuntary manslaughter. They are accused by prosecutors of purchasing a handgun for 15-year-old Ethan as a Christmas gift, failing to properly store the weapon or advise school officials their son had access to it.

More:Details emerge of what Crumbleys did before arrests, including cash withdrawals

Matthews said she expected jury selection to take a week and added, “This trial will take a Herculean effort by court administration.” She did not elaborate but indicated she wanted a fall trial date so the trial didn’t get pushed back to January 2023.

Oakland County courts, like many across Michigan, have a backlog of cases because of the pandemic.

“I’m very cognizant that your clients are still in jail,” Matthews told Smith and Lehman.

As ordered by Matthews at an earlier hearing, the parents said Tuesday they had conferred with independent attorneys on their options because their current attorneys work for the same law firm.

At an earlier hearing, Oakland County Prosecutor Karen McDonald asked that the Crumbleys be instructed by the judge whether they understood potential legal pitfalls they might face during and after a trial and possible convictions.

“Joint representation from attorneys from the same law firm is uncommon,” Matthews said, citing state law and court rules. “There is great concern of a conflict of interest.”

Matthews previously said she envisioned “myriad” potential problems and wanted two independent attorneys to counsel the Crumbleys separately without others present, including their current lawyers. Legal discussions were to be limited to consideration of “conflict of interest.”

Both Crumbleys signed waiver forms to keep their attorneys.

McDonald has argued the parents were grossly negligent, overlooked their son’s ongoing emotional problems, ignored warning signs and, on the morning of the shooting, refused to remove him from school and take him for counseling as recommended by school officials.

The Crumbleys have both pleaded not guilty to the offenses, felonies that can carry up to 15 years in prison.

The couple failed to surrender to authorities as promised once they were charged on Dec. 3. Police found them a day later at a friend’s Detroit apartment where investigators said they were hiding and preparing to flee the area. Money had been withdrawn from bank accounts, they had purchased burner phones and put their home and horses up for sale. Their attorneys explained the couple feared for their safety and needed money for legal fees.

Ethan Crumbley is scheduled for a pretrial hearing before Judge Kwame Rowe on Thursday. The teen’s attorneys plan an insanity defense and have been trying to get him transferred from isolation in the Oakland County Jail to the county’s Children’s Village facility for minors.

The Crumbleys did not visibly react to any of Matthew’s rulings, although James leaned forward while the judge talked while Jennifer tilted her head while listening.

Outside the courtroom after the hearing, Smith’s comment to a reporter from The News was brief: “We are just trying to get the lay of the land,” she said.

McDonald said she was happy Matthews denied the requests to lower bond because prosecutors believe the couple’s actions show they remain a flight risk.

“… I don’t think there’s a lawyer, jurist, or member of the public in the country who thinks that was not an attempt to flee,” McDonald said.

McDonald said her staff has been meeting with the victims of the mass shooting and their families.

“We have spent the last several weeks meeting with parents of the children who died, the children who were injured and their parents,” she said. “The one thing they really want is certainty, and that the Crumbleys will be held accountable for their actions. That’s our main priority.”

McDonald described the meetings as “difficult,” noting that “Having your child be shot at school is something I don’t think we’re really wired to understand.”

She said she is skeptical the venue would be changed.

“I do not think it’ll be successful based on the law, and that’s what guides us: the law,” McDonald said. “The burden is high for them. It is a publicized event as it should be. The nation is watching. The state is watching — as they should be. We have kids who were killed at school (but) that does not impact the defendants’ right to a fair trial.”

Lawyers in high-profile cases across Michigan have tried and failed in recent years to relocate trials, including in the corruption trial of former Detroit Mayor Kwame Kilpatrick and in the Gov. Gretchen Whitmer kidnapping conspiracy case.

Asked about Matthews’ comment that she wasn’t sure whether the state would win the case, McDonald said she was “100% confident that we will convict the Crumbleys.

“The evidence is overwhelming and I look forward to proving that to a jury,“ she said.