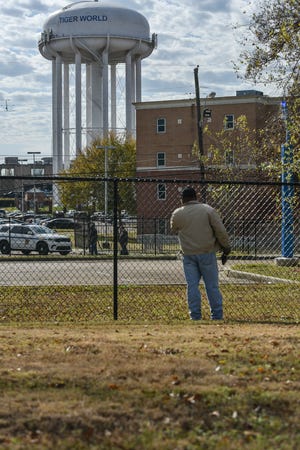 Officials have a person of interest in custody after a student was found dead in a parking lot near Dixon Hall on the Jackson State University campus Friday morning.

“It is with a heavy heart that I confirm the death of a JSU student,” said JSU University President Thomas Hudson in a press statement. “The loss of a young person is always a devastating circumstance for our campus community. Our thoughts are with the family during this difficult time. As president, I assure you that the safety of our students and campus community is our highest priority. While we do not have all of the details at this time, a person of interest is in custody.

“Out of respect for the family and due to the nature of this ongoing investigation we are unable to release the name of the student at this time.”

JSU officials did confirm, however, that the victim was not a JSU football player.

Earlier Friday, officials from the Hinds County Coroner’s office, Hinds County Sheriff’s Office, the Mississippi Bureau of Investigation and the Jackson State Campus Police were working the scene where the body was found.

Capitol police blocked off the proximity of the crime scene until further investigation.

Reporters and bystanders were kept at a distance but workers could be seen on site wheeling a gurney with what appeared to be a covered body on to a coroner’s vehicle. A man also was seen carrying a white sheet that appeared to have blood on it.

A person who answered the telephone at Hinds County Coroner Sharon Grisham Stewart’s office Friday afternoon could not provide any details on the victim and deferred questions to Grisham Stewart who did not immediately respond to request for details.

However, other media are reporting that Grisham Stewart said the victim was a male.

The MBI released a statement Friday afternoon saying they are working with the JSU campus police to further investigate the incident.

“The Mississippi Bureau of Investigation and Jackson State University police are working together to investigate the recent homicide at JSU campus. At this time, there is no further threat to those on campus. MBI is currently assessing this critical incident and gathering evidence. Upon completing their investigation, agents will share their findings with the local District Attorney’s Office. This an open and ongoing investigation; no further comment will be made by MBI at this time.”

Friday’s death is the second JSU death in recent weeks. The death of Geronimo Warner was announced on Nov. 9. Warner, 21, a member of JSU basketball from 2019-22 and a member of the SWAC regular season title-winning team in 2021. No cause of death was reported.

This is a developing story and will be updated as more details are available.