Inside ‘The Burnt City,’ Punchdrunk’s Take on the Fall of Troy 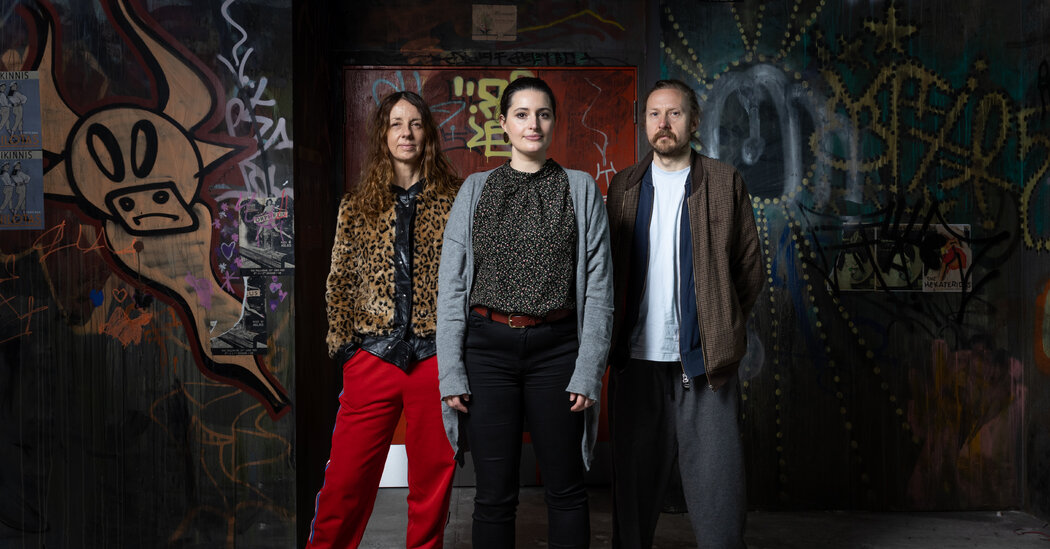 LONDON — When Emma Cole, an expert in ancient Greek theater at the University of Bristol, wove through a maze of apartments, back streets and piazzas inside two huge warehouses in South London recently, she excitedly pointed out every nod to Greek mythology that she passed, including a shrine to the goddess Artemis and graffiti written in Linear B, an ancient form of Greek writing.

Over the past year, the buildings were transformed into the backdrop for “The Burnt City,” a retelling of the fall of Troy that is the latest show from the British immersive theater company Punchdrunk. And while Cole, the show’s historical consultant, had provided crucial insight to the production, Punchdrunk gave it its own spin.

One of the warehouses, for instance, was meant to be the ancient city of Troy, yet it had a sake bar, a French bistro and a nightclub, complete with black leather sofas and pounding techno music. And neither space contained a huge wooden Trojan horse.

Cole, 33, said she did not mind the contemporary makeover. “Whenever I come here, I get so excited,” she said, adding: “It’s a way I never imagined these stories could be told. Punchdrunk are inviting everyone to look at them from a completely new angle.”

Theater companies like Punchdrunk — which is best known for “Sleep No More,” its popular immersive spectacle in New York primarily based on “Macbeth” — have long consulted academics to keep their shows historically accurate and to offer insight on scripts to their casts. Yet Cole’s involvement with “The Burnt City” went farther.

During the show’s development, Cole spent four weeks with the directors, Felix Barrett and Maxine Doyle, to help work out each character’s journey, and provided them with access to “well over” 100 ancient Greek texts for inspiration. She gave lectures on Euripides’ “Hecuba” and Aeschylus’s “Agamemnon” — two tragedies that form the core of the show — and attended rehearsals every day so that the cast could mine her knowledge. She also introduced the company to John Bennet, the director of the British School at Athens, who translated English phrases into Linear B.

Doyle called Cole’s involvement “a gift.” Typically a classicist “just comes in for an hour to do a Q. and A. and then you’re left alone,” she said, so having “an oracle” at their disposal gave them confidence in the show’s authenticity. Barrett agreed, saying that even if viewers overlooked the small references — such as the bottles of sake named after rivers of the underworld — they would appreciate the nuanced environment that had been created.

Sarah Dowling, who plays Hecuba, the Trojan queen, said “the breadth of Emma’s knowledge really helps ground the work.” Dowling said she had tapped Cole several times, including for a scene in which Hecuba prays to the gods for help defending Troy. Cole sent her a host of prayers to choose from, saving Dowling from her only fallback: Google. “Then God knows what we’d get!” Dowling said.

“The Burnt City,” which runs until Dec. 4, has been eagerly anticipated in Britain because it is Punchdrunk’s first major show there since “The Drowned Man” in 2013, when the company turned a former postal sorting office into a slice of 1960s Hollywood for a loose adaptation of Georg Büchner’s “Woyzeck.”

Barrett, one of the directors, said that for over a decade he had wanted to do a production “charting the fall of Troy,” telling its story from the perspectives of both Troy and Mycenae — the ancient city whose people, according to legend, sacked Troy — but that his company had only now found spaces to bring that vision to life.

As in other Punchdrunk productions, the action in “The Burnt City” unfurls largely wordlessly and often using dance. Audiences, who wear masks, enter the show through a set of rooms intended to look like an exhibition of ancient Greek pottery, but are then free to explore the two worlds. Many choose to follow one character throughout, like Agamemnon — the Greek commander who oversees the fall of Troy only to go back to Mycenae and be murdered by his wife.

While touring the set, Cole explained that many ancient Greek playwrights used dance in their plays, so they would not have been confused by Punchdrunk’s show. Greek tragedians were “driven by innovation,” she added, and liked writing new versions of old myths. “What’s going on here is the exact same spirit,” she said.

Cole said that she fell in love with Greek myths at age 10, but that it was not until college that she appreciated their ability to remain relevant by grappling with issues like war and tragedy. Since then, she has been studying how directors reinvent old myths.

Before “The Burnt City,” she advised several productions, including “Kabeiroi” — a small Punchdrunk production enacted on the streets of London that was loosely based on fragments of a lost play from ancient Greece — but she said she had never been as deeply involved in the process as this. Her relaying to the directors of a coming-of-age ritual in ancient Greece in which women dressed as bears made it into the show.

Her influence is also visible in some of the performances, Cole said, because many actors peppered her with questions when developing their characters. Most of those questions were straightforward, she said, but one of the more unusual ones came in March, when an actor playing Hades, the king of the underworld, asked her for ancient Greek quotations that dealt with “time as a concept.”

Most of those details will, of course, fly right over the heads of audience members. “What the hell was that all about?” said Khairil Hodgson, 41, as he emerged from a performance. Hodgson said he was “sure there was something to do with ancient Greece in there somewhere,” though he had not grasped it yet. But, he said, he would work it out soon. He was such a fan of Punchdrunk’s work that he had booked tickets for four more shows.

As Cole made her way through the mazelike set, passing through apartments that were meant to represent the underworld and posters advertising performances by ancient Greek musicians and dancers, she said she anticipated such reactions.

It did not matter if people did not get the references to classic myths, she said. But “with my academic hat on, I’d love nothing more than for someone to go away afterward thinking, ‘I’m going to read the plays now,’ then start researching.”

Canada to ban Huawei from its 5G networks