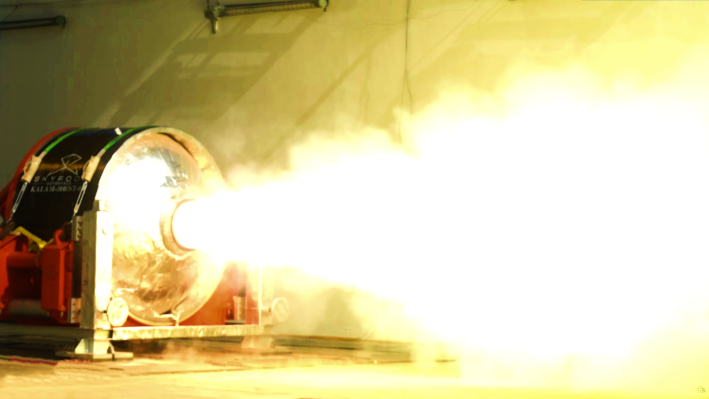 Skyroot, the first private Indian company to design, build and test a solid rocket propulsion stage, has reached another key milestone in the development of its Vikram-I launch vehicle: a full-duration test of the rocket’s third stage.

The third stage, dubbed Kalam-100 in homage to Indian rocket scientist and former President A.P.J. Abdul Kalam, is just one part of the company’s debut rocket. Vikram-I includes three solid fuel stages, plus a liquid-fueled kick stage that’s designed to serve the small satellite launch market. It’s designed to carry up to 480 kilograms to low-inclination orbits, and the company says on its website that it’s designed to be assembled and launched from any launch site within 24 hours.

Vikram-I is one of a trio of rockets Skyroot is currently developing; the other two, Vikram-II and Vikram-III, will be able to carry heavier payloads with multiple orbital insertions, Skyroot says.

The next steps will be test firings for Stage 1 and Stage 2, Chandana said. The company’s existing funding, including an $11 million Series A and a $4.5 million bridge round, will cover most of the costs of testing. Skyroot is in the process of raising a Series B to take the company to “multiple orbital launches,” he said.

All this funding should get Skyroot to a technology demonstration launch by the end of this year, with the company’s first commercial orbital mission early next year. That launch would take off from India’s spaceport on Sriharikota Island, and would make Skyroot the first private Indian company to build and launch private rockets.