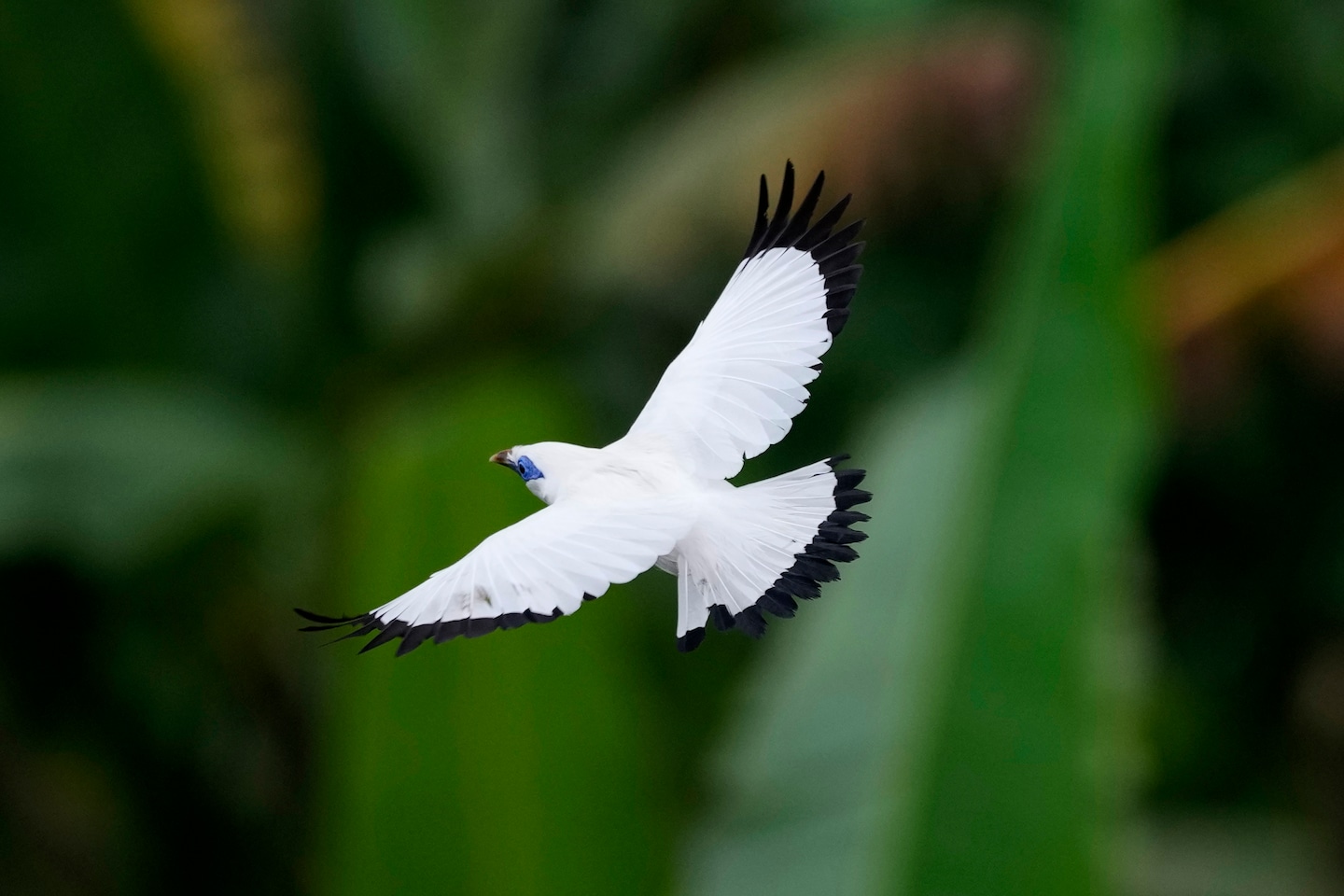 BABAHAN, Indonesia — Tossing flowing crests back and forth, three snow-white Bali mynahs share a branch, squawking and looking around with the trademark blue patches around their eyes catching sunlight. Minutes later, four more join — a sight that would have been impossible in the wild two decades ago.

But by working with bird breeders and sellers — the very group that contributed to the prized birds becoming critically endangered — conservationists are releasing them in Bali province, hoping to boost the wild population.

Experts say more research and monitoring is needed, but the conservation model has shown promise over the past 10 years and could be replicated for other vulnerable birds in Indonesia.

Endemic to Bali, the Bali mynah has been a highly sought collector’s item in the international cage bird trade for more than a century due to their striking white plumage and song. Capture of the birds for sale coupled with habitat loss from land conversion to farming and settlements led to the bird being listed as “threatened” by the International Union for Conservation of Nature in 1988 and upgraded to “critically endangered” in 1994. By 2001 experts estimated only about six Bali mynahs were living in the wild, with thousands in captivity across the globe.

Breeders are able to apply for licenses to breed the birds. If approved, they’re given mynahs by the government and are allowed to keep 90% of the offspring for private sale. The remaining birds are rehabilitated and released at West Bali National Park, where they can be monitored by park authorities.

The conservation method is compatible with Indonesian culture, where it’s common to have cage birds and people rely on the bird trade for their income, said Tom Squires, a PhD candidate at Manchester Metropolitan University studying Bali mynah ecology and other threatened birds in Indonesia.

“The national park began to understand that and … create the conditions where you could have a wild population that still thrives,” said Squires. “Bird keepers can still keep birds and follow their hobby without causing real problems for wild populations — which is, I think, a lot better than species going extinct in the world.”

Early mynah releases were plagued with issues: some birds were infected with a parasite that caused high fledgling mortality, others were killed by natural predators. Poaching also continued — and the national park’s captive breeding facility was even robbed at gunpoint, with nearly 40 birds stolen.

Yet conservation efforts in the last decade have seen greater success through increased monitoring of the birds, stronger census data and more research, said Squires.

Agus Ngurah Krisna Kepakisan, the head of the West Bali National Park, also attributes the success of the breeding program to the creation and proliferation of “buffer villages” around the park. Villagers get assistance in obtaining permits to breed Bali mynahs there.

“With the community being the breeders … they are helping us to take care of the birds that exist in nature,” he said. “There are also those who used to often look for and take Bali mynah from nature.”

Squires said there’s definitive evidence some released birds have produced offspring. “So that leads me to believe that the population is is certainly self-sustaining to an extent,” he said.

The breeding program’s strides are visible throughout the park, where Kepakisan says 420 Bali mynahs now live and hop around in trees, pop their heads out of bird boxes and squawk at tourists passing beneath them.

Conservation efforts have spread to Tabanan Regency — a three-hour drive from the park — where mynahs fly over lush rice fields framed by mountains and forest.

The area is a recent release site for Friends of the National Parks Foundation, an Indonesia-based non-profit that works with donors and breeders to purchase, rehabilitate and release the birds.

Veterinarian I Gede Nyoman Bayu Wirayudha, who founded the organization and has worked in Bali mynah conservation for years, said its conservation efforts focus in part on grassroots community investment in the birds’ welfare.

Traditionally, communities around conservation areas have thought there’s no money to be made from them, he said. But Wirayudha believes the rare birds’ presence will help draw tourists, which will provide additional tourism income to the region as it has in other parts of Bali province where mynahs have been released.

“You need to give something back to the community so they can feel that conservation gives them benefits,” he said.

Community outreach seems to be working. At the organization’s April release of mynahs, groups of students, police, military and neighboring villagers eagerly watched as the mynahs made their first flight into the wild.

Squires, the researcher, says the conservation model could be applied to other vulnerable or endangered birds in Indonesia such as the black-winged mynah. “For any of the lowland birds affected by the caged bird trade … this is the sort of approach that’s going to be needed,” he said.