I was wrongly detained at the border. It’s part of a larger problem. 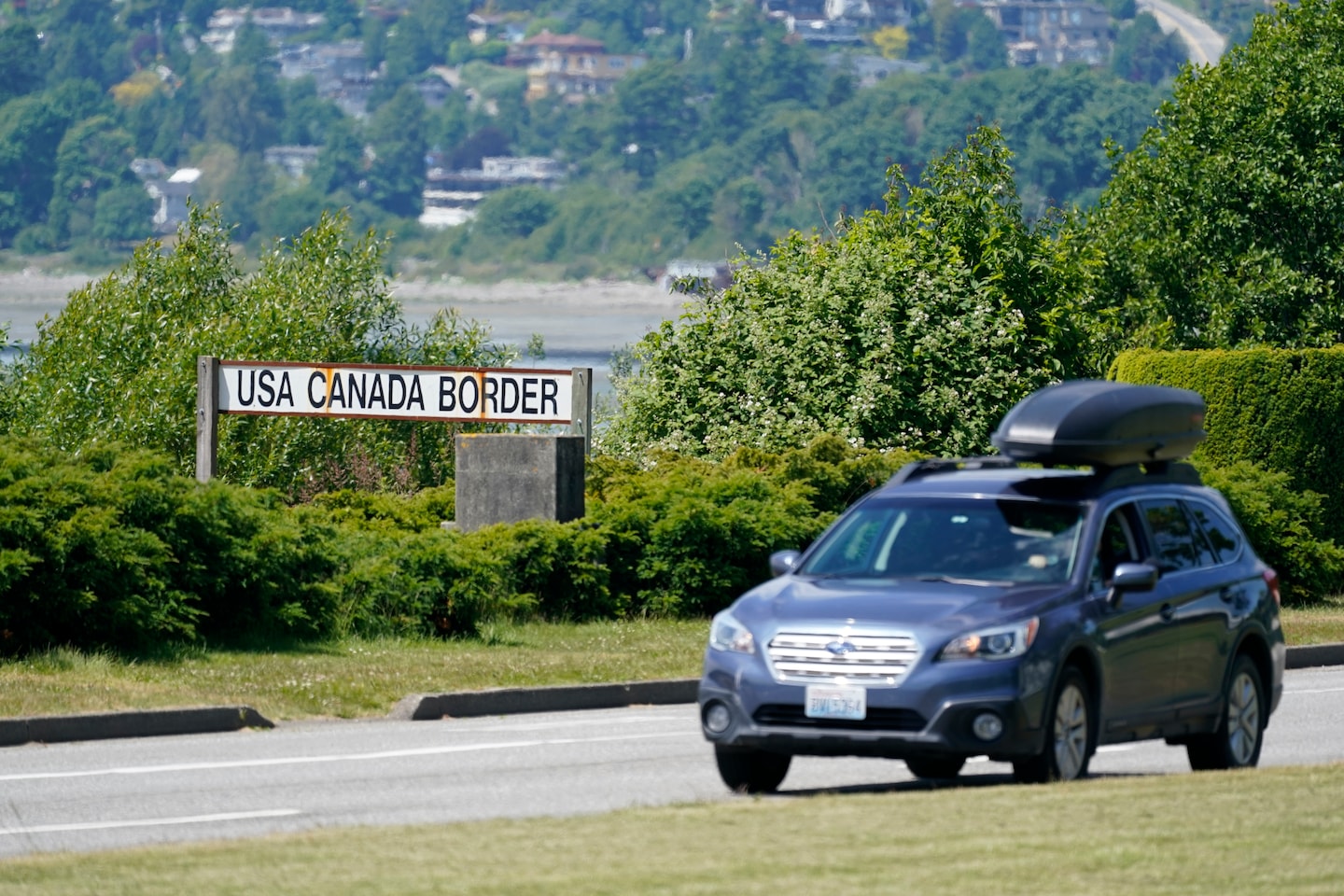 When I tell strangers my name, people routinely respond, “Like the boss from ‘The Office,’ right?”

No, I explain, he’s W-A-L-L-A-C-E. I’m W-A-L-L-I-S. In the 1990s, after the celebrated novel “Infinite Jest” came out, I bet that my tenuous connection to author David Foster Wallace secured me some prized Manhattan restaurant reservations.

But any benefits of my common-ish name vanished on a recent Sunday afternoon when I was returning home to New York following a four-day road trip to Montreal with my wife and 12-year-old son. After we handed our passports to an agent at the Champlain, N.Y., port of entry, an alarm blared and the officer in the booth ordered, “Put your hands where I can see them.” In a flash, at least four U.S. Customs and Border Protection officers, hands on holsters, surrounded my Subaru. A blond-haired agent half my age who reminded me of a cross between Rutger Hauer and Opie from “The Andy Griffith Show” shouted for me to keep my hands up and get out of the car. That’s impossible if you need to open a car door, which I tried to explain.

Gingerly exiting my car, I walked backward and then put my hands behind my back, following commands. The officer cuffed me as I looked at my shocked wife and little boy, wondering if I would see them again. The clink of the locking cuffs was an unforgettable sound. I scanned my memory for every possible misdeed. Was I bringing back too much Quebec ice cider? Were the Montreal bagels in the back seat banned agricultural products?

“Why am I being arrested?” I asked. The officer told me that I was not being arrested. It certainly felt like being arrested, as I was led into a holding room. A mustached officer told me that my name was the same as or similar to that of a wanted criminal. Some minutes later, I heard someone shout, “Okay, he’s good,” and off came the cuffs. I received not an apology for the false arrest but a pamphlet titled “Securing America’s Borders: The CBP Screening Process” that includes this questionable claim: “We pledge to cordially greet and welcome you to the United States.”

Border patrol is the wrong solution for problems at the border

We tend to forget that we live in a surveillance state, just not a particularly sophisticated or efficient one. I covered the aftermath of 9/11 up close, so I understand that the U.S. government must protect us from terrorists and criminals. I also get that borders are busy. CBP notes in its fact sheet that on a typical day it processes 491,688 passengers and pedestrians. But how is it possible that the U.S. government, which can track a terrorist halfway around the world and deliver a Hellfire missile into his speeding car, lacks the technology to It sh?

I’m not sure why I was flagged or which watch list includes my apparently dangerous namesake or near-namesake, because neither CBP’s director of media, Lawrence “Rusty” Payne, nor the agency answered questions about my detainment. I know, though, that federal agencies that manage immigration and our borders are far from bulletproof. A 2020 Cato Institute study concluded that Immigration and Customs Enforcement is “regularly issuing immigration detainers for U.S. citizens.” The study examined a sample of 155 erroneous detentions and found that 15 percent were the result of mistaken identity.

In 2004, federal air security officials repeatedly questioned Sen. Edward M. “Ted” Kennedy because he was apparently on the no-fly list. A George W. Bush administration source told The Washington Post at the time that “the name ‘T. Kennedy’ has been used as an alias by someone on the list of terrorist suspects.”

In 2015, mixed martial arts middleweight champion Rich Franklin was handcuffed, marched through Los Angeles International Airport and held in a cell following a trip to Singapore because he had the same or similar name as an escaped or wanted felon.

Stephen Coulthart, an associate professor at the University at Albany’s College of Emergency Preparedness, Homeland Security and Cybersecurity, estimates that a few hundred separate databases collect information on travelers. “The overall architecture is extremely complex,” said Coulthart, co-author of a 2021 policy paper, “Improving Big Data Integration and Building a Data Culture for U.S. Border Security,” published by the Harvard Kennedy School. And he worries that “all these different databases, they don’t speak well to each other. Because these different databases were set up in some cases with different protocols, maybe programming languages.”

Jay Stanley, a senior policy analyst at the American Civil Liberties Union, fretted during a phone interview that since 9/11 federal government watch lists have become “big, bloated and over-inclusive.” According to the ACLU, the federal watch list now includes about 1.6 million names. “There’s every incentive to throw people on the list and little reason to throw them off,” Stanley said. “Every person on Earth is a potential terrorist, according to our national security agencies.”

“The fact that passports are such strong identification means that [CBP’s] back-end system must be all the more problematic,” continued Stanley, which “guarantees that innocent people will be treated as dangerous fugitives, and reflects a typical failure to balance bureaucratic security goals against the impact on innocent people.”

Sylvie Nelson, 56, can empathize. Nelson was born in Canada but is also a U.S. citizen. Like many people who live near the border, she often travels back and forth between the countries to shop and stay at her second home near Montreal. In December 2009, she was heading home with her toddler son and 6-year-old daughter when U.S. border officers at Overton Corners, N.Y., handcuffed her and separated her, at least briefly, from her children. “They were still in their car seats. I was hyperventilating, as you can well imagine,” she said. Border officers, she recalled in a phone interview, told her, “You need to calm down.” Subsequently, Nelson, who was then head of her local chamber of commerce, was detained several more times and once held in a cell. She generally received polite enough treatment, but she recounted that an officer once told her husband, “That should teach you for going shopping across the border.”

She learned during at least five detainments that she had been mistaken for someone who looked very different from her: “It was an African American man. I’m Caucasian and a woman. Two hundred and fifty pounds, and I’m not 250 pounds. Tattoos. I’m not tattooed.”

Nelson said border officers recommended that she change her name or call ahead before traveling so they could conduct a “primary lookout override,” which according to a CBP report assists “travelers who are erroneously designated for secondary inspections because they possess a characteristic similar to a person of interest,” something of a manual purge of the incorrect information. But Nelson refused. “It’s their problem,” she said. “It’s their antiquated system.”

Only after she went to the press and contacted her representative in Congress, New York Democrat Bill Owens, who has since retired, did her border woes stop. In 2010, Owens received a letter from CBP officials that the agency had taken “positive steps” to resolve Nelson’s quasi-arrests.

Chris Bronk, an associate professor at the University of Houston who has studied passport technology, called for CBP to increase the use of biometrics such as fingerprints to screen travelers. But Bronk, who served as a State Department official at the U.S.-Mexico border in the early 2000s, also warned that even such systems have their limitations: Longtime farm laborers might have worn down their fingerprints, for example — and hardened criminals could burn theirs off.

To lessen the chances of nabbing an innocent traveler, Coulthart urges CBP to provide front-line employees with more training in information technology. “CBP is struggling to develop a data culture,” said Coulthart, who believes that the agency should establish an IT boot camp for recruits. He thinks officers would benefit from a better understanding of the data that they are using: “Just having some basic understanding of those systems is necessary for having some understanding of what they can and can’t do.”

During his State of the Union address in March, President Biden said that “If we are to advance liberty and justice, we need to secure the border and fix the immigration system.” He added, “We can do both,” pointing to “new technology like cutting-edge scanners.”

For the time being, when it comes to border technology, cutting edge we’re not.