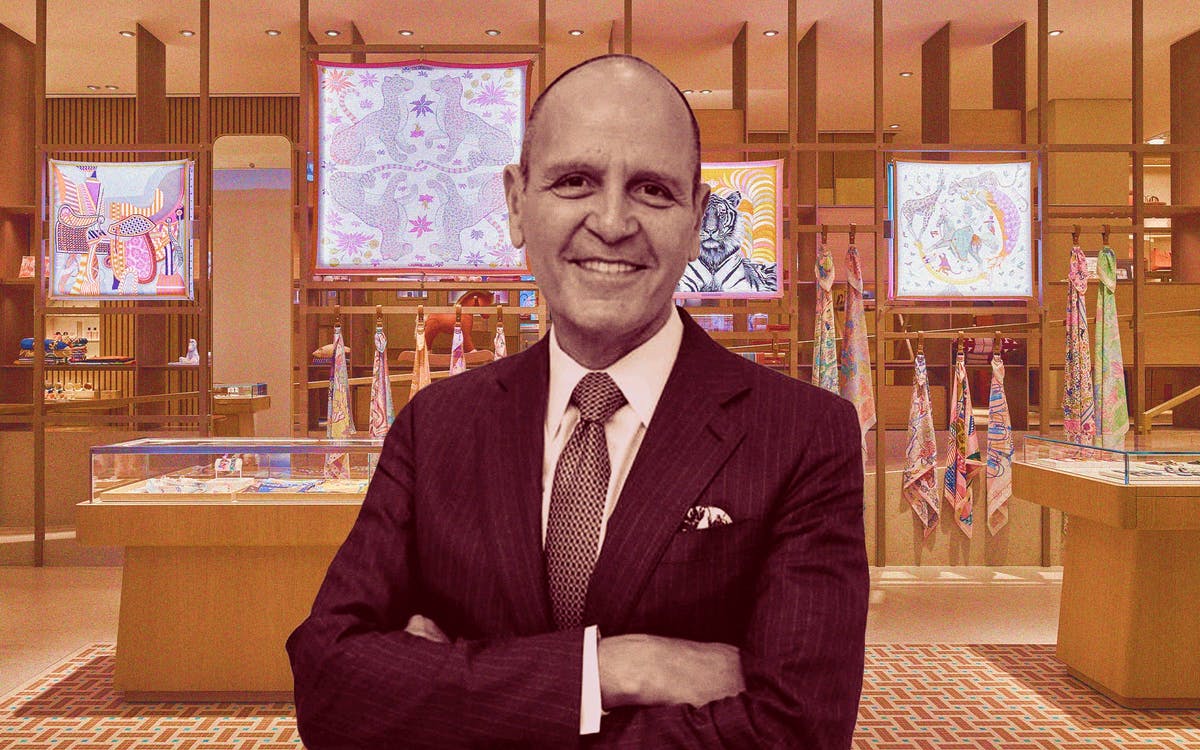 The president and CEO of Hermès Americas wants a chorizo-and-egg taco but is worried about spilling it on his silk tie. It’s a Friday morning in late April, and Robert Chavez has just walked from his hotel in downtown Austin to the luxury brand’s new boutique on South Congress Avenue, passing the Veracruz All Natural taco window along the way.

“I actually slowed down and thought, ‘No, you cannot buy a chorizo-and-egg taco and eat it walking over the bridge,’ ” he says with a laugh. “ ‘You’re going to get grease all over you!’ ”

The 67-year-old Chavez showed great restraint in passing up one of the best breakfast tacos in Austin—and as a native of San Antonio, he certainly knows what makes for a good breakfast taco. But tonight is Hermès’s grand opening party, an invitation-only affair featuring a cocktail reception and a formal seated dinner for two hundred guests off-site (on the locally themed menu: golden beet salad, Gulf red snapper, and a Texas olive oil). Chavez is wearing a bespoke Hermès suit for the occasion, lined with one of the brand’s iconic silk-scarf prints and accented with the aforementioned tie. Today is not the day to risk a dollop of salsa or dribble of chorizo.

Chavez arrived in Austin a few days earlier from New York, where he’s resided since graduating from Princeton University in 1977; he now lives there with his husband. He’s been coming to Austin since his older brother attended the University of Texas in the seventies, back when South Congress was a seedy strip known for empty buildings, low rents, and drug activity. After a rebirth that began in the nineties, it became known for mostly local retailers and restaurants, but in the past few years, it has attracted the likes of Lululemon, Reformation, Soho House, and a California-based cafe that sells $15 smoothies. Like so many Texpats, Chavez says he was gobsmacked by the city’s recent growth. “I haven’t been here for three years, since COVID, and when I started to drive in and saw the skyline, I was like, ‘Oh my God, this is crazy,’ ” he says.

It’s partially because of that change, however, that Hermès selected Austin for the company’s third Texas store. After finding success in Houston and Dallas—and noticing that Central Texas shoppers were traveling to those boutiques—the iconic French fashion house zeroed in on a prime corner of the trendy SoCo strip to hang its Birkin bags. “We think it’s a great way for us to expand awareness and to introduce the brand and everything we represent: the quality, the craftsmanship, the stories,” Chavez says. “We think it will resonate really well with the people here.”

Resonate it has, though reactions to the store’s arrival have been mixed. A luxury brand that sells $69 lipsticks and $950 scarves in a city battling an affordability crisis had some locals pointing to its arrival as the death of “old Austin” (again). But the naysayers could not temper the general excitement, and shoppers spent the first week waiting for hours to get a peek at the store, bringing snacks and camping chairs and creating a line that rivals the one at Franklin Barbecue.

After more than forty years in the fashion industry, Chavez knows what resonates with consumers. He’s led Hermès’s North and South American entities—Hermès USA and Hermès Latin America—through the past two decades, including the retail roller coaster that was 2020. During Chavez’s tenure, Hermès has added twenty U.S. boutiques and boasted revenue for the Americas of about $1.5 billion in 2021, according to the company.

As a child on San Antonio’s South Side, leading a global fashion brand was not on Chavez’s short list of things to be when he grew up. The middle of three boys, Chavez dreamed of being a third-grade teacher. While at Luther Burbank High School, where he would graduate as valedictorian, a guidance counselor named John Buhay urged him to consider applying to Ivy League schools. A few months later, Chavez came home to a letter on the table welcoming him to Princeton’s class of 1977. He was so shocked that he ran—the family didn’t have a car—the fifteen minutes back to school to show Buhay the letter. Unlike Chavez, Buhay was not surprised.

Less than a year earlier, his father had died, and with his older brother in Austin, Chavez was unsure if he wanted to leave his mother and younger brother in South Texas. “I said to [my mother], ‘I can’t go, I can’t leave you,’ ” he recalls. “She said, ‘This is what your father would want; this is what I want. This is your future.’ ”

The two-day bus trip to Princeton’s ivy-covered campus in New Jersey was Chavez’s first trek outside the Lone Star State. He saw the Gateway Arch in St. Louis and was awed by the hustle and bustle of Philadelphia. As he settled in at Princeton, his worldview continued to crack open, though he describes the transition as “difficult” for a poor kid coming from a public school on the South Side of San Antonio.

After graduating from Princeton (Buhay attended the ceremony, along with Chavez’s family), the 22-year-old moved to New York, a city he had fallen in love with during weekend trips in college. He got a job at Bloomingdale’s, figuring he’d spend a year or two learning the retail business before going to graduate school. Instead, he says, he “absolutely fell in love” with retail—and with a man in the upholstery department named Vince Sabio, who would eventually become his husband.

“Bloomingdale’s moved you around because they wanted you to experience different departments, and it was a great training ground then,” he says. “I didn’t realize I was learning about brand, brand building, consistency, training.”

His $9,500-per-year salary didn’t make living in New York easy, even in the late seventies and early eighties. In between paydays, he would save money on subway tokens by walking the forty blocks to work. “All these things you learn even as a kid, they stay with you,” he says. “Princeton changed me in some ways, but it didn’t change me at my core.”

Stints with Macy’s and as president of Etienne Aigner followed before Hermès came knocking in 2000. Chavez flew to Paris and was presented with the offer letter during a meeting at New York’s Lowell Hotel just a few days later. His mother, he says, was skeptical.

“My mother was very proud of me, but she was old-school,” Chavez says. “When I left Aigner to join Hermès, she was like, ‘Why are you changing jobs again?’ [My parents] never changed jobs. I was like, ‘Ma, it’s Hermès!’ ”

Chavez credits his gut with helping him guide the 185-year-old fashion house over the past 22 years. But he’s also a keen observer. He notices details such as the back-in parking along South Congress Avenue and a passerby who stops at the window to survey the rows of brightly colored sneakers and chic slides. At one point, he even notices that one of Hermès’s classic scarves is backward and walks over to a display to quickly switch it around. For years, he says he watched Texas’s growth from afar and made notes on which companies were headquartered in the state.

Investing in three Texas cities makes business sense, but it also offers Chavez a tie to his past, to his family, to a time when he could eat chorizo-and-egg tacos with abandon, grease be damned.

“I love coming home,” he says. “It’s still home no matter how many years it’s been.”