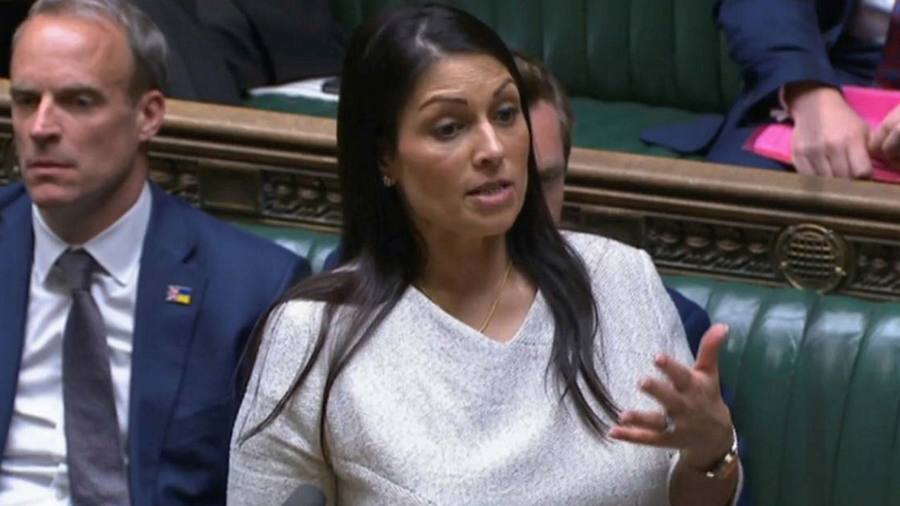 Home secretary Priti Patel on Tuesday was forced to defend the government’s policy to send some asylum seekers to Rwanda following criticism from the Conservative backbenches citing “grave concerns”.

Patel told the House of Commons the UK had a “long and proud history of offering sanctuary to refugees” but argued that illegal migration driven by organised criminals placed “unsustainable pressure” on public services.

The move was welcomed by several backbench MPs, such as former minister Sir Edward Leigh and veteran backbencher Peter Bone who argued the policy was “the right thing to do” in light of the scale of migrant channel crossings.

Last week, the government announced its plan to transport some migrants, including those who have not sought asylum in a safe third country, entering the UK to Rwanda to be processed for resettlement.

On Tuesday, a handful of Conservatives spoke against the policy. Former prime minister Theresa May, herself an ex-home secretary, said she opposed the plan, stating: “From what I have heard and seen so far of this policy, I do not support the removal to Rwanda on the grounds of legality, practicality and efficacy.”

She added that there was a lack of clarity over who the scheme applied to and a risk that it could play into the hands of traffickers.

“I understand that those who will be removed will only be young men . . . Does she [Patel] not believe, and where is her evidence, that this will not simply lead to an increase in the trafficking of women and children?” May asked.

But the home secretary insisted that “everyone who is considered for relocation will be screened and interviewed, including an age assessment, and have access to legal service”. May’s concerns were echoed by former cabinet minister Andrew Mitchell, who asked the home secretary if she accepted the “grave concerns” held by “many of us” that the policy was unworkable.

He added that before the plan is brought to a parliamentary vote on Wednesday the government ought to clarify the cost per asylum seeker to the taxpayer.

Former cabinet minister David Davis questioned the safety of those being transported to the African country, which has one of the highest rates of malaria infection in the world, according to the Word Bank.

“Our own government website warns travellers [to Rwanda] about hepatitis A and B, tetanus, typhoid, cholera and tuberculosis, not to mention rabies and dengue fever, which can’t be vaccinated against.”

Over the Easter weekend the government was fiercely criticised by religious leaders. Justin Welby, the archbishop of Canterbury, said the policy raised “serious ethical questions” and was “the opposite of the nature of God”. Stephen Cottrell, archbishop of York, described the decision as “depressing and distressing”.

Defending the announcement, Patel argued that “fairness” was at the heart of the policy. She added that the agreement would be a “major blow to people smugglers and their evil trade in human cargo”.

The opposition Labour party’s shadow home secretary Yvette Cooper described the policy as a distraction from criticism of PM Boris Johnson over his handling of the “partygate” scandal.

“We have seen over the last week this unworkable, shameful and desperate attempt to distract from the prime minister’s law-breaking,” Cooper told the House.