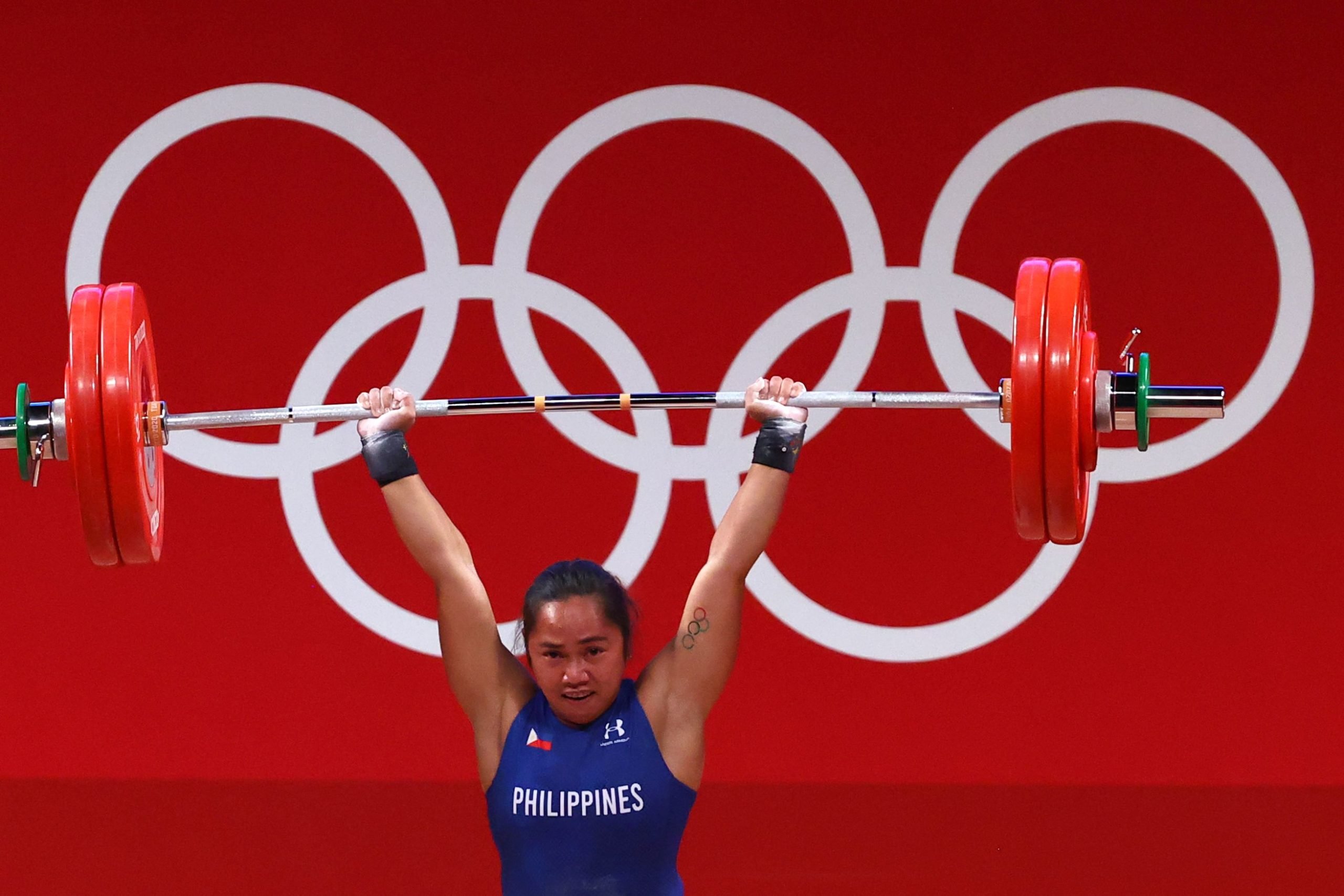 Hidilyn Diaz and the weightlifting team could boost Team Philippines back to third place. —AFP

HANOI—There is a lot of heavy lifting needed to be done if Team Philippines wants to finish at third place in the overall medal tally of the 31st Southeast Asian (SEA) Games.

That’s what the national weightlifters are here for.

The crack weightlifting team has been deployed with no less than Olympic champion Hidilyn Diaz as squad leader. The mission: Collect more gold medals and begin laying the concrete for a path to the Paris 2024 Olympics.

Diaz, the country’s first Olympic gold medalist and one of the big-named athletes taking part in the biennial meet here, will see action in women’s 55-kilogram class at Hanoi Sports Training and Competition Center on Friday.

“We hope we can contribute to the gold medal tally,” said Samahang Weightlifting ng Pilipinas president Monico Puentevella. “Hidilyn is in top shape. And everybody is ok. They are all prepared.”

The Philippines has currently dropped to fourth place with sports officials looking to weightlifting and boxing to restart the country’s gold machine.

Indonesia and Malaysia pose the main threat for the country, which is eyeing at least three gold medals in the sport, according to Puentevella on Thursday.

Rosegie Ramos got the bid rolling on Thursday with a bronze medal in the women’s 49-kg class with a total lift of 179 kg. She finished behind Thailand’s Surodchana Khambao (195 kg) and Vietnam’s Dinh Thi Pham (183 kg).

On Saturday, Vanessa Sarno takes her turn in the women’s 71kg division. Sarno is also favored for the gold medal.

“My goal in every competition is to win a [gold] medal, watch the flag of the Philippines rise and sing the ‘Lupang Hinirang’ (national anthem),” Sarno told the Inquirer before the start of the regional meet. “I’ll do everything I can to win my first gold medal in the SEA Games.”

But for a sport that brought Olympic glory to the Philippines after nearly a century of waiting, the Filipino weightlifters are using the SEA Games as a starting point for their ultimate goal: Getting into the Paris Olympics.

Puentevella said the athletes’ performances here will serve as their auditions for around seven Olympic qualifying tournaments scattered around the world.

“There are five qualifying and two compulsory events for Paris,” said Puentevella. “Now we want to compete in as many as five of them to maximize our chances of qualifying in the Olympics.”

“The plan is to keep competing until the Paris [Olympics in] 2024,” Diaz said before arriving here. “If there’s also another weightlifting event in Cambodia [in 2023], then I’ll also compete in that SEA Games.”

“I am 100 percent determined to also make a name for myself in the Olympics,” Sarno, the Asian junior and senior champion, said. “Like ate Hidi (Diaz), I’m ready to sacrifice so I can achieve my goal of reaching the Olympics soon.”

Like Diaz, too, Sarno is not taking the competition here for granted.

Diaz, in fact, arrived a week earlier than originally scheduled so she could begin her final preparations for the event. Her winning lifts in the 2019 Games were 91kg in snatch and 120kg in clean and jerk. She holds the Olympic record in clean and jerk at 127kg.

But the 31-year-old star warned that opponents will be highly motivated to take her down.

Sarno is also aware of the competition, saying “weightlifters from Thailand and Vietnam” will be her main rivals.

Another Olympian, Nestor Colonia (67kg) will also see action on Friday along with Rowel Garcia (61kg) and Margaret Colonia (59kg).