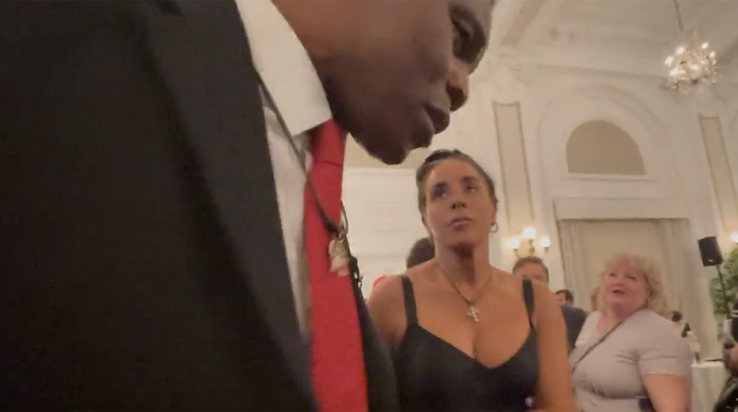 Every month, an average of 70 women are shot and killed by an intimate partner, according to data collected by Everytown. Abusers with access to  firearms are five times more likely to kill their victims. In the Texas elementary school mass shooting, the shooter first shot his grandmother, which is a pattern in mass shootings: ” In more than half of mass shootings over the past decade, the perpetrator shot a current or former intimate partner or family member as part of the rampage.”

Keep this in mind as you listen to twice accused of threatening to blow a woman’s head off and Republican Senatorial candidate Herschel Walker “answer” a question about guns after the horrific Texas mass shooting of at least 20 children and a teacher.

Georgia Senate GOP nominee Herschel Walker dodged CNN’s Chief Congressional Correspondent  Manu Raju‘s question asking if he believes there should be new gun laws in the wake of the Texas shooting by saying, “What I like to do is see it and everything and stuff.”

believes there should be new gun laws in the wake of the Texas shooting,

Georgia Senate GOP nominee Herschel Walker told me in ATL: “What I like

to do is see it and everything and stuff.” He didn’t engage further.

In a January 2012 police report obtained by the Atlanta Journal Constitutional  in August of 2021, a Texas woman told police “that when she tried to end what she said was a long romantic relationship with Republican U.S. Senate candidate Herschel Walker he threatened to “blow her head off” and then kill himself.”

No charges were filed against Walker and he denied the claims.

What makes this even sadder is the woman didn’t want to make her statement due to concern about Walker, whom she didn’t want to harm. The officer reportedly took the statement and filed it due to his own alarm. (She is now deceased.)

Walker’s ex-wife Cindy Grossman was granted a protection order in 2005 after he allegedly threatened to shoot her in the head, bearing an eerie similarity to the later claim, which was only recently unearthed by the AP in July of 2021. The AP summed up their findings, “The documents detail accusations that Walker repeatedly threatened his ex-wife’s life, exaggerated claims of financial success and alarmed business associates with unpredictable behavior.”

Walker’s “qualifications” for the job he seeks in the United States Senate are already dubious, and his temperament and judgment have already been exposed as wanting. Recently, for example, we learned he was linked to acting as a spokesperson for a program that preyed on vets.

It would be misguided to attribute his violent behavior with the mental illness he wrote that he has, as mental illness is not indicative of a willingness to commit crimes. A propensity for criminality is the issue.

Walker is, however, the perfect Republican candidate. He has been endorsed by their leader, Donald Trump, whose only vetting seems to be if the candidate is both unethical and desperate enough to side with Trump in attempts to steal the next election and even take back the 2020 election. Bonus points for abuse of women, if Trump’s own treatment and many of his favorite entourage members are any indication.

And of course, Walker actually lives in Texas, but is running in Georgia, just like Trump’s Pennsylvania pick, Mehmet Oz, who actually lived in New Jersey when he announced. Carpetbagging haters of democracy, with dubious motives (all politicians, of course, but some genuinely also want to help people) centered on power? Perfect Republican candidate.

All of these facts tell a story, and they are the story of a party that refuses to allow even the most basic of gun reform laws to even be contemplated, and historically accuses Democrats of “gun grabs” without being fact-checked or called to account by the media on these dangerous lies. Polling shows that “90% of Americans want their federal lawmakers to take steps to prevent gunmen from perpetrating horrific violence.” But Republican senators – and of course, two “Democrats” refuse to do the job the people pay them to do.

The 18-year-old shooter posed in photos on his Instagram with a magazine and semi-automatic rifles, which is reminiscent of family photos we’ve seen with other recent young mass shooters being gifted weapons by their parents, and in social media photos mimicking those we see of Republican candidates for office, posing with automatic weapons with their family or alone, as if somehow this gun is their most important focus and value.

What kind of political party puts unregulated gun ownership as their number one value, while children are ROUTINELY slaughtered in their schools.

As Republicans seek to overturn Roe v Wade on dubious claims of their concern for the “life” of cells, their greedy disregard for the lives of actual children is highlighted by their refusal to vote for the most basic of gun protections, like background checks and the ability to refuse to sell a gun to someone on a suspected terrorist list and those who have been convicted of spousal abuse.

70 women are shot and killed a month on average by an intimate partner. Walker knows this is true, for he himself has allegedly at least twice threatened a woman he “loved” with blowing her head off with a gun. Why does this clearly unhinged person have access to a gun in order to threaten the women in his life? Walker is a walking post card for why we need gun control.

Walker’s cowardly refusal to engage on an issue that would save the lives of women and children is indicative of the craven Republican abortion platform – nothing but a cheap and deadly get out the vote tactic for their evangelical base that does not have any basis in principle or values.

Republicans are fine with children being slaughtered in their schools, with people slaughtered in their place of worship and at the grocery store. They will send thoughts and prayers, but go right back to lying about gun laws so they can keep in good standing with the gun manufacturing lobby, also known as the NRA.