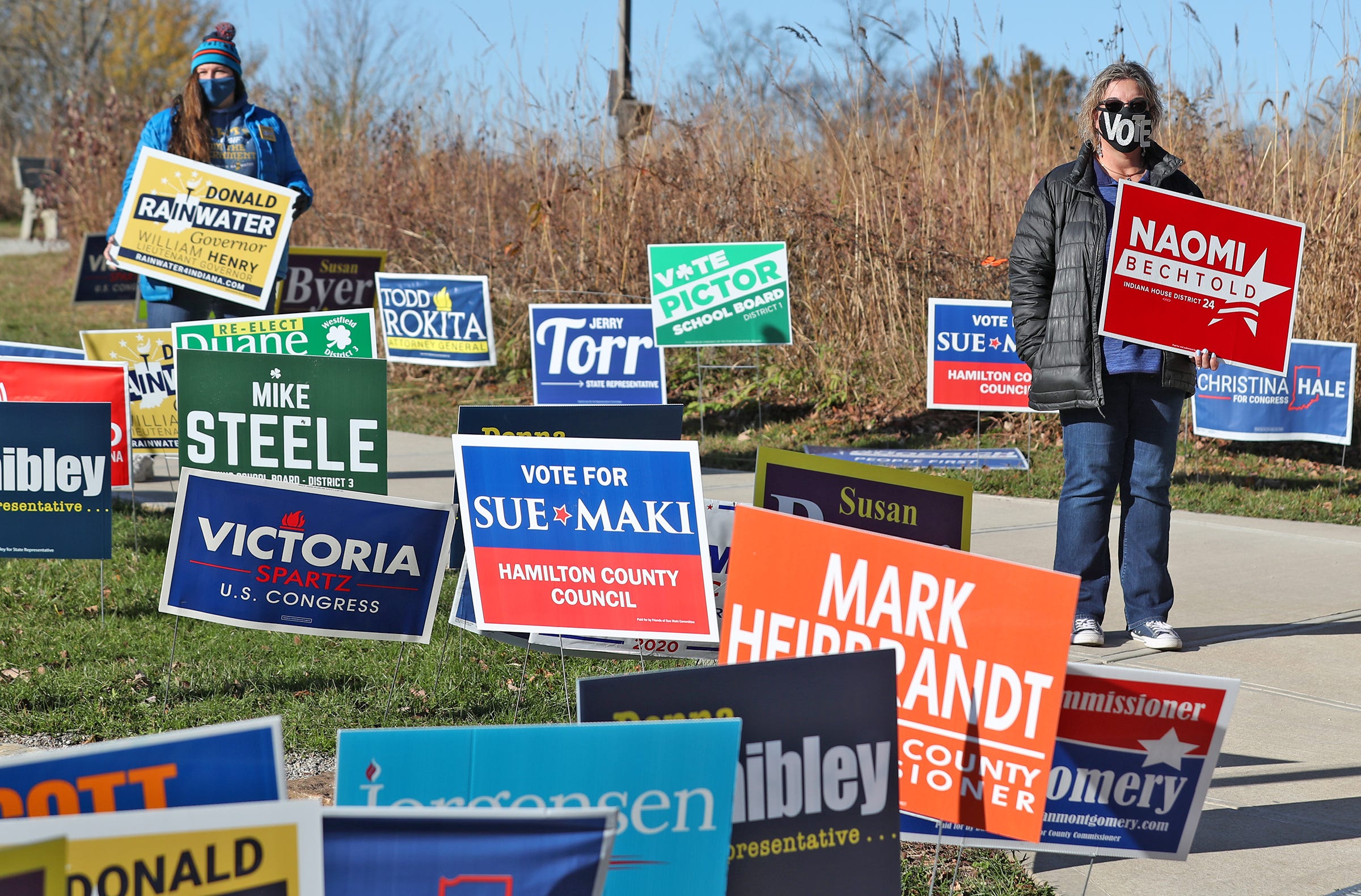 Decrying a “carnival”-like aesthetic at polling places, the Hamilton County Commission has passed an ordinance limiting the number of campaign signs candidates can post.

The measure, effective immediately, limits the signs to two per candidate at early voting sites and one at precincts on election day.

“It looks like a carnival at the polling sites,“ Commissioner Christine Altman said in a prepared statement. “Some candidates are placing four, five or more signs at a single location. Multiple that by the number of candidates, and the problem is clear.”

The ordinance also restricts the size of the signs to 2-by-3 feet, and they cannot be placed with metal or wood posts, but rather with wire stakes.

Big spending:$53.5M in bonds for future developments are before Carmel Council. Here are the projects.

What voting sites does the rule affect?

The measure would apply now to two early voting sites in Carmel, two in Fishers, the Judicial Center and 4H Fairgrounds in Noblesville and one in Westfield. The primary election is May 3.

At least one candidate in the Republican primary ripped the ordinance, calling it “an abuse of political power at its worse” that hinders lesser known challengers.

“This is intended to adversely affect non-incumbents without name recognition,” said John Accetturo, who is running for the county council District 1 seat, an open seat currently held by Fred Glynn, who is stepping down to run for state representative.

Accetturo said it was especially egregious that the commissioners “changed the rules in the middle of the game” in a vote without a public hearing.

Accetturo said he has bought hundreds of signs with the intention of putting more than one at election polling sites.

“We planned out whole campaign on it, and now they are sitting in my garage, and I can’t use them,” he said.

‘We are not trying to confine anybody’

Commissioner Steve Dillinger said commissioners considered whether the ordinance was unfair to challengers before they voted and decided it was not.

“We are not trying to confine anybody,” said Dillinger, who has served on the commission for 32 years and is not up for re-election this cycle. ”We felt that if everyone went by the same rules that it would not be unfair. This is to prevent people from overdoing it.”

On the contrary, Dillinger said, if candidates were allowed as many signs as they wanted the incumbents would have an advantage because they usually have more campaign funds and could afford more.

Altman is the only one of the three commissioners up for re-election this year and she does not have a primary challenger.

Dillinger said a main consideration was that polling places have been complaining about the number of signs left behind after election day that never get picked up and litter the property. That has made it more difficult to get churches and other sites to agree to host a polling place. More than 20 polling spots in the last election declined to be locations this election, Dillinger said.

County Clerk Kathy Williams said in a news release that “voting locations can be incredibly difficult to secure because of the time and space commitment they require.”

“We do not want to abuse their generosity or inconvenience them with picking up errant signs.”

The ordinance also limits the amount of time the signs can be left at a location. Signs cannot be placed at a polling place earlier than 12 hours before the polling place opens and must be removed within four hours of a polling place closing on election day.

Signs that aren’t picked up will be considered abandoned and can be removed and destroyed by the owner of the polling place.

Dillinger said what convinced the commissioners to act was “hundreds of signs” outside the government center when they went to their meeting Monday. They decided to draw up, introduce and pass the ordinance at the meeting.

The councilors then had the extra signs removed from the courthouse and 4H properties.