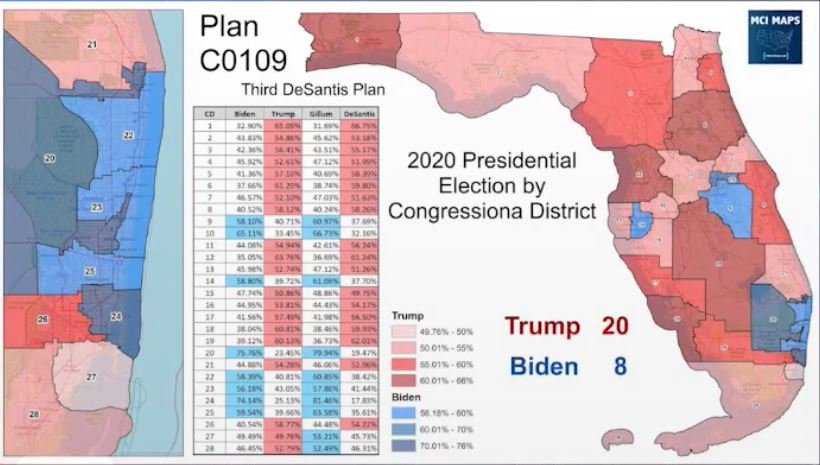 Governor Ron DeSantis and Florida lawmakers proposed a redistricting map in April for the Sunshine State. The new map gets rid of previous gerrymandered seats and gives Republicans a 20 to 8 advantage in the state.

The new map proposed by Governor DeSantis will give Republicans 4 new seats in the US Congress. The new map includes an extra seat awarded to Florida this year due to its population growth.

Democrats caught a break earlier this month when a judge who reviewed the maps declared the changes in the northern part of the state to be unconstitutional.

But on Friday a Florida appeals court reinstated Governor DeSantis’s map that was signed into law last month. This allows the new districts to take effect for now.

In an order issued Friday, the First District Court of Appeal stayed a temporary injunction on the DeSantis map put in place May 12 by a circuit court judge. The judge, J. Layne Smith of the 2nd Circuit Court of Florida, had blocked the map because he said it unconstitutionally disenfranchised minority voters by breaking up a northern Florida district represented by Democrat Al Lawson, who is Black.

The appeals court on Friday also expressed skepticism with Smith’s decision to replace the DeSantis map with one drawn by Harvard University professor Stephen Ansolabehere while the lawsuit proceeds. The court said there was a “high likelihood” that Smith’s decision was unlawful because “by awarding a preliminary remedy to the appellees’ on their claim, the order ‘frustrated the status quo, rather than preserved it.’”

The map drawn by Ansolabehere, a witness for the groups who are suing the state over the new boundaries, kept intact Lawson’s district while adopting the DeSantis-approved lines for districts south of the Panhandle.