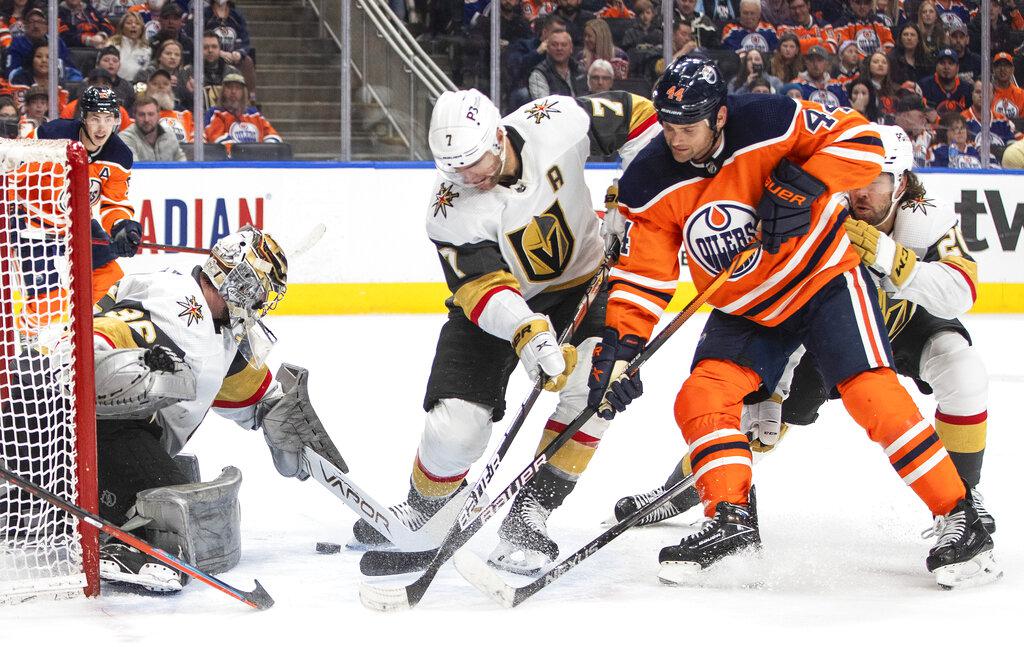 Vegas Golden Knights goalie Logan Thompson (36) makes the save as Edmonton Oilers’ Zack Kassian (44) and Alex Pietrangelo (7) battle for the rebound during the second period of an NHL hockey game Saturday, April 16, 2022 in Edmonton, Alberta.

The Golden Knights gave up two goals during a five-minute stretch in the third period, losing 4-0 to the Edmonton Oilers at Rogers Place on Saturday and taking another hit to their playoff chances.

Oilers goalie Mike Smith made 39 saves for his second consecutive shutout, and Vegas (41-30-5) failed to gain ground in the Pacific Division standings and secured only three of a possible six points on their three-game Canadian road trip.

The Golden Knights trail the Los Angeles Kings by one point for third place in the division.

The Kings play later tonight against the Columbus Blue Jackets at home. The Dallas Stars, who hold a two-point lead on Vegas for the second wild-card spot in the West, will also play later in the night against San Jose.

Less than two days after scoring six goals against the Calgary Flames, the Golden Knights got plenty of shots but nothing of importance. Smith turned away all five high-danger chances his way.

Edmonton scored three times in the third period after holding a 1-0 lead through two periods.

This is a developing story. Check back later for updates.