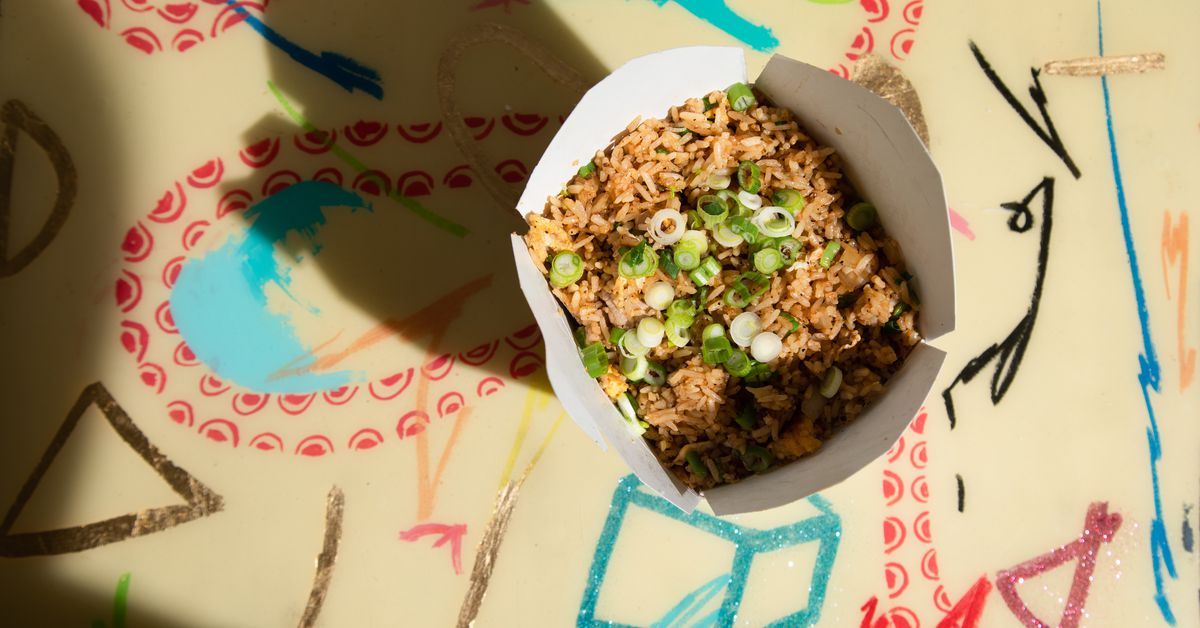 At first glance, Golden Dragon in West Philly looks like any other Chinese takeout joint, and I feel like we know it already: It seems like the kind of place that is open every day of the year sans Thanksgiving, cooking up crowd-pleasing sesame chicken that gets loaded into plastic bags with more than enough plastic silverware in classic-silhouette white-and-red takeout boxes, stuffed with fortune cookies that make you ponder your luck for the rest of the day. It feels like a place run by a Chinese American family working hard to get by and keep its customers loyal, where every dollar counts, competition is fierce, and the margins are razor-thin. I say all this with love: I love these places and grew up in one.

But while Golden Dragon may look like a traditional Chinese takeout spot on the outside, it’s more than a little different. It is a Black and Asian-operated food project started by Chellie Faroul, Jeremiah Jordan, and Heidi Ratanavanich with the mission to bring affordable and thoughtfully sourced dishes conceived from passed-down family recipes to the community of West Philadelphia. Ratanavanich’s family is Thai American, while Faroul’s family is from Barbados. The menu is short and curated. You won’t find takeout dishes like sesame chicken or beef and broccoli, but rather kimchi, egg, and cheese sandwiches; cucumber salads; and fish cakes doused in curry.

“With the 2020 shutdown, we realized that a lot of how people came together was halted. We couldn’t eat with friends or share food with others,” Ratanavanich says. “We were already chatting about opening our storefront. The pandemic just made us realize we needed to actualize these dreams sooner.”

Walking into Golden Dragon, I’m hit with a wave of nostalgia and then a second wave of curiosity and wonder. It’s both familiar and funky. The fridge on the right, which you would expect to be filled with soda, is instead stocked with pantry staples like butter and produce. Art, mementos, and a throwback yellow Power Ranger figurine all line the order counter. On the window ledge to the right sits a vase in the shape of an elephant and a display of dried bouquets for sale by Fruitcake Flowers, a small business offering custom arrangements on a sliding-scale payment model. A colorful splatter pattern livens up an ordinarily dull epoxied tabletop. Ready orders of curry bowls, fennel salads, and fried chicken sandwiches in takeout containers sit tied up and are then passed through the plexiglass-framed counter. The sounds and smells of fried rice tossed in a high-heat wok permeate the kitchen in the back.

But another more fundamental thing about Golden Dragon is different: It’s not your typical new restaurant with a flashy niche concept and rich investors, and it’s not just about selling products and turning a profit. Instead, Golden Dragon is about highlighting and celebrating the food that people make in community and using the space as more than a restaurant. It’s a gathering place, a marketplace for Black and brown and queer small businesses, and a hub for the community to try out new creative means of making and distributing food. In short, it’s a unique and uncommon community-oriented restaurant model.

Later this spring and summer, Golden Dragon plans to release a few new and exciting menu items highlighting other local food projects. One of them is Chili Crisps for Spicy Lips, a Philadelphia queer-run project that sells small-batch spicy chile oil. The oil and collaborative Sichuan cucumber smash dish will be available soon at Golden Dragon.

“So much of the work is making sure we highlight other community-focused groups and projects done by and for the community,” says Faroul.

It’s also behind-the-scenes work that’s different at Golden Dragon than at other places. When the restaurant’s walk-in refrigerator broke in early March 2022, instead of having to hire an electrician for thousands of dollars, a friend and neighbor of Ratanavanich, who wanted to see the project succeed, volunteered to fix it at a minimal cost. This is just one example of all the community stakeholders who have given their time, talents, and resources to foster what Golden Dragon embodies, the continuing communal spirit that makes Philadelphia special.

Ratanavanich and Jordan were friends holding a periodic pop-up food project similar to Golden Dragon’s current restaurant called Lucky Bundle during the early months of the pandemic. The pop-up’s success only confirmed that they wanted to open their own more permanent facility to continue making the foods they love for those who enjoy them. Amid the continued pandemic, the previous owners of Golden Dragon had made the hard decision to close their doors, just like many other restaurants were forced to do across the country.

Faroul came on board when Ratanavanich and Jordan invited her to join them in opening up a restaurant, given her prior experience. “I’ve been in the food business in various capacities for most of my career — as a farmer, food buyer, fishmonger, to name a few roles. Heidi shared that she wanted to do what her parents did in their community almost 40 years ago, which was open up the place Al’s Drive-In, and I was immediately sold on the idea and was ready to jump in.”

They decided to keep the name Golden Dragon to continue the spirit of the Chinese takeout restaurant that previously occupied the space.

When the restaurant held its soft opening earlier this year, Golden Dragon quickly sold out of many dishes. “It was a small three-day testing period, but so much was learned during that short span of time,” says Jordan. “We’ve workshopped and adapted since that time to operate smoother, especially remembering that this isn’t easy operating on a different type of restaurant model.” Golden Dragon still has to make a baseline income to keep the restaurant afloat just like any other business, but it’s not there to make a profit quickly. For the owners, it’s much more meaningful to strengthen community ties and work with other Philadelphia groups with similar missions.

My parents owned a Chinese restaurant in Cherry Hill, New Jersey, in the 1990s. I watched my mother and father work hard together to make the business successful, my mother learning a little more English hour by hour as she took orders, my father cooking in the back, stuffing the orders over-full because he loved feeding people. But I saw the toll their tireless labor took on them, working nights, weekends, and holidays. Their health suffered. They struggled to turn a profit and ultimately had to sell the business. I often wonder: Might there be another way?

The answer may be what Golden Dragon is creating: a new vision for food projects that reflect marginalized culinary traditions, where people can make good dishes that reflect their backgrounds and share them with customers in a financially sustainable way. All in the name of community.

Be on the lookout for Golden Dragon’s Thai Sweet Chili wings this spring, along with other new additions to their menu, and remember to bring cash! Golden Dragon is located at 5260 Rodman Street, open Thursdays to Saturdays from 9 – 2 pm for breakfast and 4 – 8 pm for dinner. Sundays opened all day. Website.

Where to Eat at Philadelphia International Airport (PHL)

Zone28 Offers Indoor Fun for Kids and Adults in Harmarville