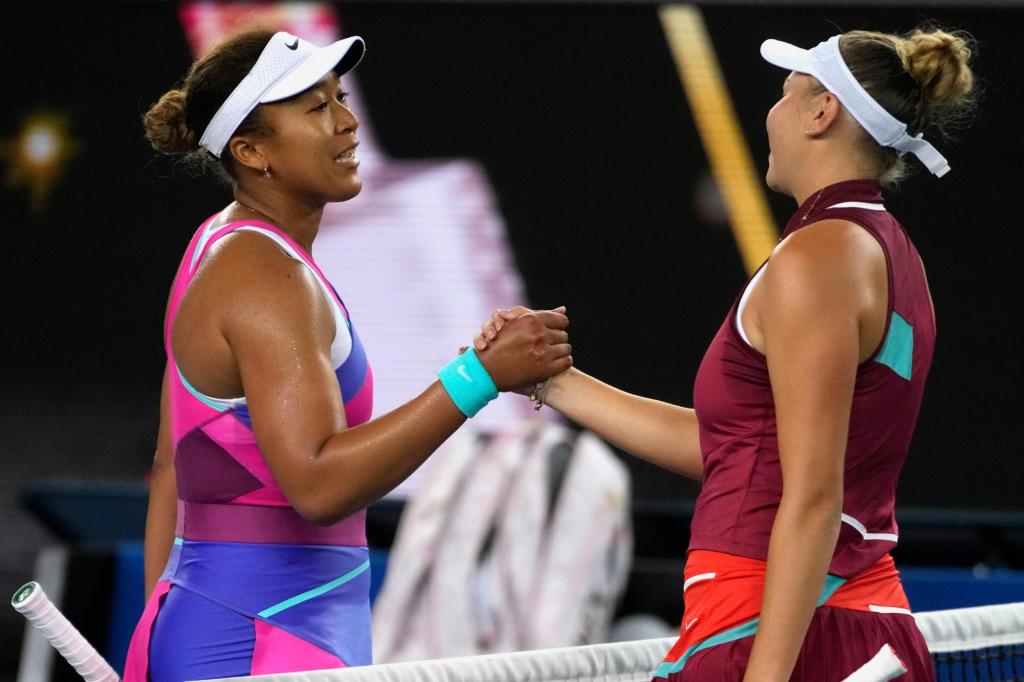 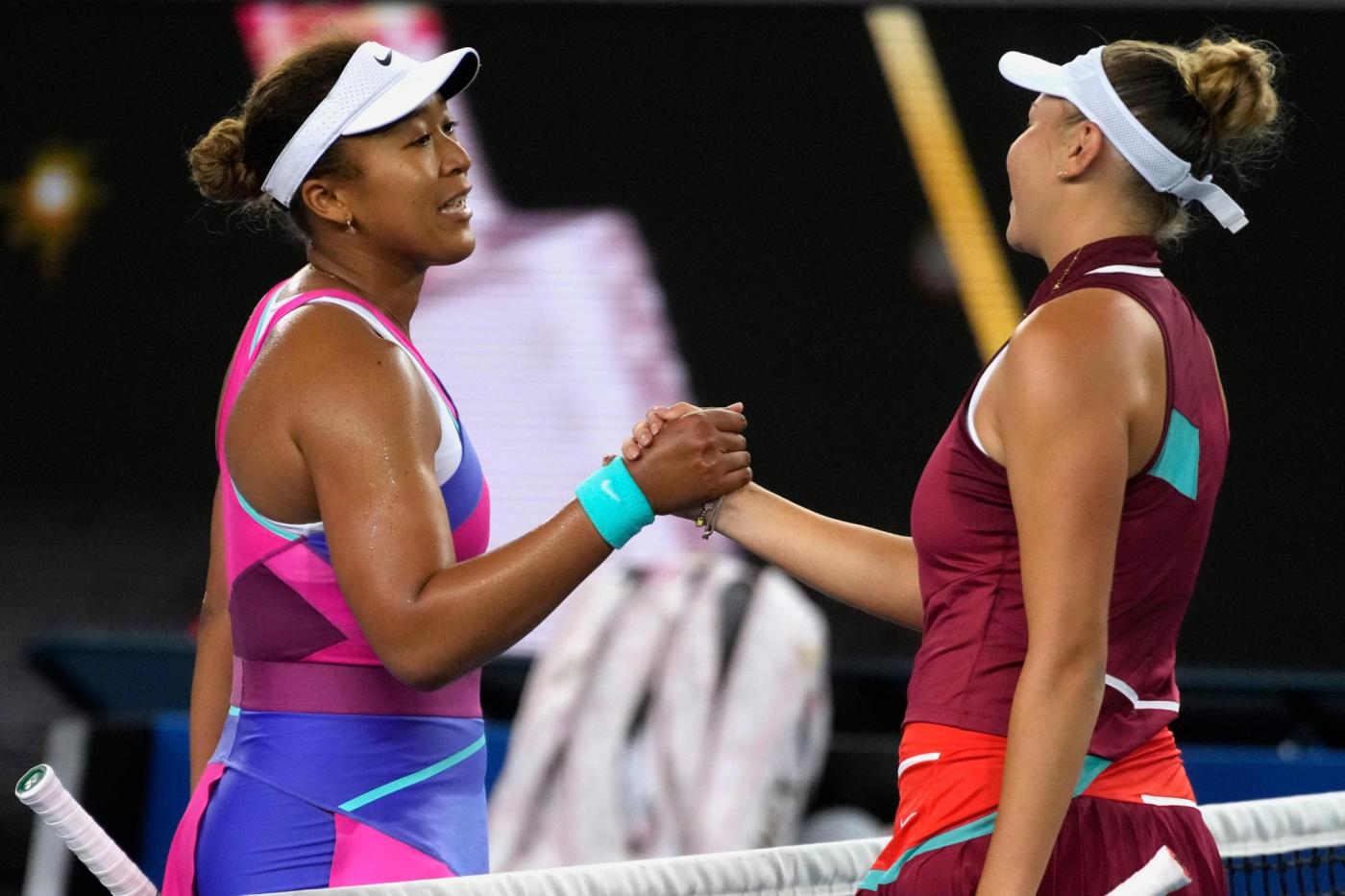 PARIS (AP) — The Latest on the French Open tennis tournament (all times local):

Novak Djokovic is on court in his first-round match against Yoshihito Nishioka, and that is the only contest still going at the French Open.

They are playing with the retractable roof shut at Court Philippe Chatrier because of showers Monday night.

Djokovic took the first set by a 6-3 score.

No other courts at Roland Garros have covers so 10 other matches were still in progress when they were suspended for the night because of rain and darkness. Those contests will be scheduled to resume Tuesday.

U.S. Open champion Emma Raducanu’s French Open debut was as difficult as can be for more than a set before she emerged with a 6-7 (4), 7-5, 6-1 victory over Czech qualifier Linda Noskova.

The 12th-seeded Raducanu trailed by a set, then was down a break in the second set twice, before coming back to win in more than 2 1/2 hours against a player who was trying to pull off the sort of upset Raducanu did over and over again at Flushing Meadows last year.

At the U.S. Open, Raducanu was an 18-year-old participating in only her second Grand Slam tournament — and she became the first qualifier to win a major tennis trophy.

At Roland Garros on Monday, she faced the 17-year-old Noskova, who is ranked 184th and was making her Grand Slam debut after going through qualifying.

Noskova won the junior title in Paris in 2021 and was the youngest player in the women’s field this time. Had she won, she would have been the first qualifier to beat a player seeded as high as No. 12 at a major since Raducanu knocked off No. 11 Belinda Bencic at the U.S. Open.

Rafael Nadal and all of his aches and pains reached the second round of the French Open.

The 13-time champion at Roland Garros beat Jordan Thompson 6-2, 6-2, 6-2 in the first round on Court Philippe Chatrier.

Nadal won his men’s-record 21st Grand Slam title at the Australian Open but he has only recently returned from a rib injury that has bothered him since March.

He has also been dealing with chronic pain in his left foot. That kept him out of Wimbledon and the U.S. Open last year, and bothered him again during a loss on clay in Rome this month.

Wawrinka had played only four tour-level matches this season before the French Open, winning two and losing two. He missed most of last season after having surgery on his left foot.

Two former Grand Slam champions made it to the second round at the French Open.

Barbora Krejcikova has become only the third defending women’s champion to lose in the first round of the French Open.

It was Krejcikova’s first match since February because of an injured right elbow.

The only other two women to lose in the first round a year after winning the title at Roland Garros were Anastasia Myskina in 2005 and Jelena Ostapenko in 2018.

Naomi Osaka says she is “leaning more towards not playing” at Wimbledon again because the WTA and ATP have said they will not award ranking points this year after the All England Club banned players from Russia and Belarus because of the invasion of Ukraine.

The four-time Grand Slam champion and former top-ranked player sat out Wimbledon in 2021 as part of a mental health break following her withdrawal at the French Open.

After losing in the first round at Roland Garros on Monday, Osaka said the tennis tours’ move to withhold ranking points from Wimbledon “is kind of affecting my mentality” and she is “not 100% sure if I’m going to go there.”

She said she is “the type of player that gets motivated by seeing my ranking go up,” but added that she needs to think about the issue more before making a final decision and could change her mind.

Top-seeded Iga Swiatek has extended her winning streak to 29 matches by advancing to the second round of the French Open.

The Polish player, who won the French Open title in 2020, beat Lesia Tsurenko 6-2, 6-0 in the first round on Court Phillipe Chatrier.

Swiatek’s winning streak is the longest by any woman since Serena Williams won 34 in a row in 2013. She has won the title at her past five tournaments.

Swiatek has also won a tour-leading 14 sets at 6-0 this season.

Naomi Osaka’s return to the French Open has ended in the first round.

Osaka is a four-time Grand Slam champion who took two mental health breaks last season. That included one that began when she withdrew before her second-round match at the French Open.

Anisimova is a 20-year-old American who reached the French Open semifinals in 2019. She also beat Osaka in the third round at the Australian Open in January.

Osaka double-faulted twice on break point, once in each set. After the second, which gave Anisimova a 4-3 lead, Osaka took a 40-0 lead in the next game but the American held.

Osaka played with tape on her left Achilles. She was stretching it and kicking it with her right foot when she was broken in the seventh game of the second set.

Day 2 at Roland Garros offers quite a collection of big names on the schedule and quite a bit of rain in the forecast.

Naomi Osaka is getting things started at Court Suzanne Lenglen against the player who beat her at the Australian Open in January, 20-year-old American Amanda Anisimova.

Osaka is a four-time Grand Slam champion who used to be ranked No. 1 but dropped in the rankings after taking two mental health breaks last season. That included one that began when she withdrew before her second-round match at the French Open.

There will be a parade of top players at Court Philippe Chatrier, the only arena with a retractable roof at the clay-court tournament. That includes Iga Swiatek, Barbora Krejcikova, Rafael Nadal and, at night, Novak Djokovic.