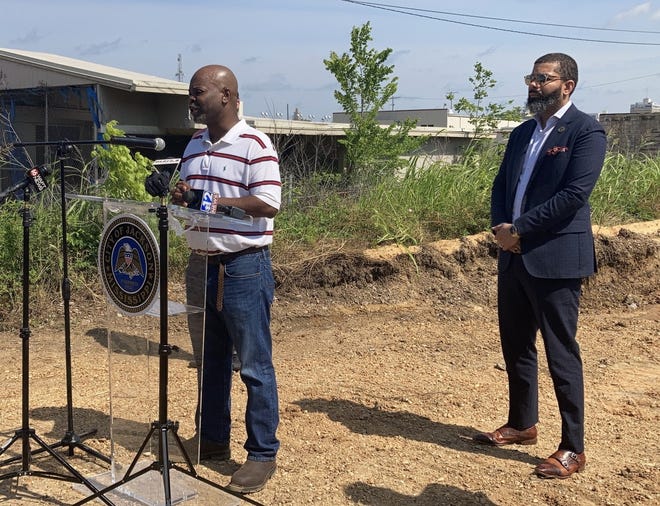 Five miles of water pipes will be built in South Jackson by the fall and the new pipes are expected to improve water service by increasing flow and pressure, city officials said.

The water main pipes will run from Jefferson and Silas Brown streets to an area by Interstate 55 and McDowell Road.

“This does not solve all of our challenges, but this particular investment … will certainly improve service for some of our residents that have suffered inequitably at the hands of our failing water system,” Mayor Chokwe Lumumba said during a press conference in South Jackson.

The city has received bids for the construction, officials said. On Thursday, a backhoe and other construction vehicles moved earth at a site at East Rankin Road near South State Street.

More:How Jackson’s water system made it a focus in America’s infrastructure crisis

The new line will benefit several neighborhoods including Belhaven, downtown, South Jackson and the I-55 south corridor.

Altogether, it will connect to existing lines running from the J.H. Fewell Water Treatment Facility in Belhaven to McDowell and Frontage roads.

Public Works Director Marlin King said the project is scheduled to be complete and operational by October. Completed portions will be put into service as they are constructed, city officials said.

Residents’ issues with the city’s water system became clear most notably during last year’s winter storm that damaged the water system and left residents without water for weeks.

Lumumba proposed the $7.6 million project after the storm. Funding for the project comes from American Rescue Plan Act money the city received, he said.

The city’s water system has had improvements over the last 30 years, including expansion of the OB Curtis Water Treatment Plant in Ridgeland and other water line extensions.

Lumumba said the recent project was first considered in 2003.

“This is a long time in the making,” he said, adding that the project shows concerns for residents and the city’s desire to build a sustainable and equitable water system.