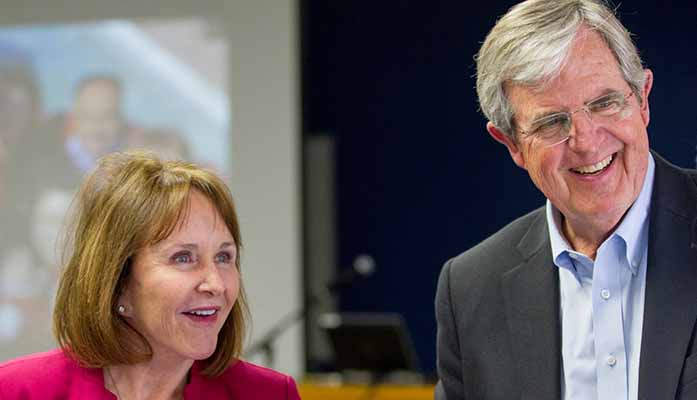 The Pima County Board of Supervisors will meet Tuesday to address the erosion of public confidence in how the county government is being run, after it was recently revealed that former County Administrator Chuck Huckelberry received more than $12,000 a month in a state pension while also receiving his $24,300 a month salary.

All five county supervisors have claimed to have knowledge of Huckelberry’s retirement nor the change in his employee status. Supervisor Steve Christy has called on Huckelberry’s personal attorneys to attend the meeting “to answer questions regarding their client’s employment contract.”
Huckelberry, 71, began working for Pima County in 1974, later becoming County Administrator of what is now a 7,300-employee public entity. He filed with the Arizona State Retirement System in July 2021 and began receiving a $12,228 per month pension payment while shifting from a county employee to a contractor.

The change was made possible by a provision in Huckelberry’s last employment contract approved by the supervisors six months earlier. It stated in part that if Huckelberry retired, he “can return to work as a contractor without any negation of the terms of this contract, including its length.”

The annual salary called for in that contract was $292,000. That was on top of employee benefits such as a $8,200 annual health savings account contribution and a $550 per month vehicle allowance.

After Huckelberry retired, he received a pension check on top of his county pay until hitting a 19-week cap imposed by the Arizona State Retirement System. He then began receiving his full monthly pension along with a county salary based on a 20-hour work week, along with his contracted employee benefits.

The County Administrator’s non-disclosed retirement and change to contractor status was revealed earlier this month when it was announced Huckelberry was resigning his position due to his medical condition.

In October, Huckelberry suffered a brain hemorrhage, fractured ribs, and a punctured lung after being hit by a vehicle while bicycling in downtown Tucson. His family announced in January that Huckelberry returned to his home to continue his recovery, and in a statement earlier this month it was noted Huckelberry requires “months of additional therapy.”

A key question the supervisors are expected to ask Tuesday is what role new County Administrator Jan Lesher and County Attorney Laura Conover played in the negotiation of Huckelberry’s January 2021 contract, and whether either knew that Huckelberry subsequently retired.

Lesher, who was Huckelberry’s deputy county administrator, was named Acting-County Administrator in December. She was formally voted into the position earlier this month.

Another question being asked by many county employees is why Huckelberry was allowed to continue his lucrative employee benefits when his status changed to contractor. There are also questions as to whether Pima County violated its own policies by changing the county’s top administrative job to a contracted position without considering other interested applicants.

And Supervisor Matt Heinz has indicated he wants answers Tuesday to how Pima County’s top administrative official could retire without any notice to the board of supervisors.

The Arizona State Retirement System permits its members to return to work while collecting pension benefits but there are strict limits on the number of hours the member can work. According to ASRS, a pensioner can work fulltime for only 19 weeks per fiscal year of July to June. The rest of the weeks the pensioner must work less than 20 hours.

County staff has stated that Huckelberry complied with the ASRS restriction even while on medical leave. It appears that once he exceeded the 19 week fulltime limit, he collected salary for a parttime workweek by utilizing sick days and vacation time Huckelberry had banked during his years with Pima County.