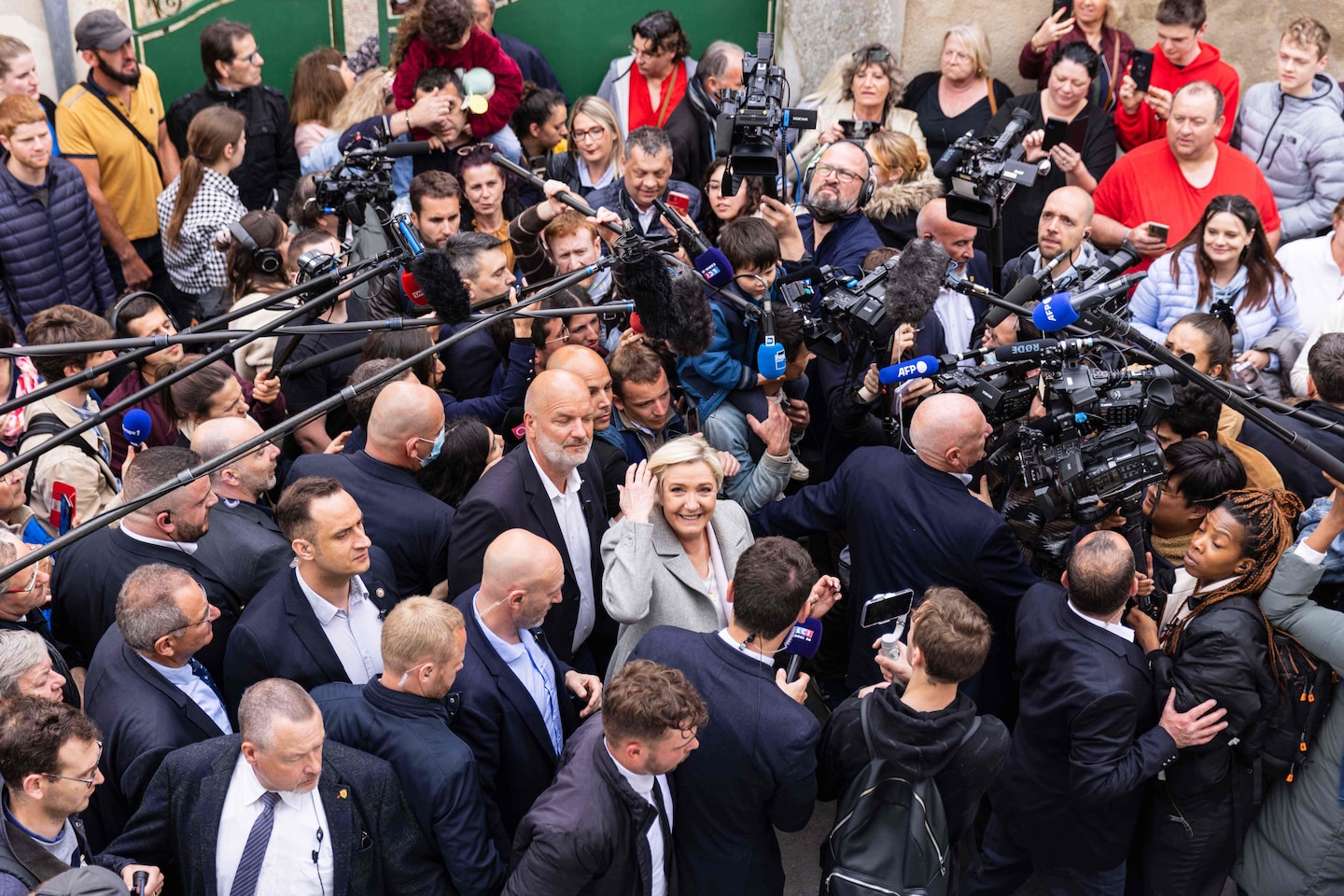 RIGA, Latvia — Already facing a resurgent menace from the Kremlin, Europe is bracing for the possible rise of a threat from within — one who could bolster Moscow, break the European Union and diminish the NATO alliance at the continent’s most critical moment since the fall of the Berlin Wall.

Marine Le Pen, a doyenne of the far right with a history of warm ties with Russian President Vladimir Putin, is staging her strongest of three bids for the French presidency, with polls ahead of Sunday’s final-round election putting her within striking distance of the Élysée Palace. Should she succeed, observers from Portugal to Latvia fear an illiberal, Russia-friendly leader taking the helm of the E.U.’s sole nuclear power.

Washington, too, would face a new strategic challenge in Le Pen’s France, which, under her leadership, could undermine support for Ukraine and align with Moscow’s interests.

Before Russia’s invasion of Ukraine, Le Pen proposed a new Franco-Russian alliance, promising to forge one even if it provoked American sanctions. She said Ukraine belongs in Russia’s sphere of influence and, in 2014, defended Russia’s annexation of Ukraine’s Crimean Peninsula.

Now, though she has distanced herself from Putin, she has suggested she would halt French weapons transfers to Ukraine and, as soon as the war ends, seek to broker a “strategic rapprochement” between NATO and Moscow.

Here in Latvia, as in the other Baltic countries, calls are mounting to boost NATO’s mission to counter the escalating danger from Moscow. But Le Pen, some here warn, could weaken the alliance at the worst possible time.

French presidential candidate calls for NATO to reconcile with Russia

In recent days, Le Pen has rejected any “subjection to an American protectorate” and suggested unease with French troops under foreign command. Although her platform is anti-American, it harbors echoes of former president Donald Trump, who early in his term dismissed NATO as “obsolete.”

Le Pen has stopped short of arguing for full withdrawal from NATO, saying she would keep France as part of the alliance and adhere to Article 5, which compels member nations to defend others that come under attack. But she has pledged to pull France out of NATO’s military command structure (and keep it out of any future European army). That position could damage coordination and planning, casting doubt on continued French surveillance flights in Poland and troops in the Baltics, while raising broader questions about NATO’s future.

“We have no illusions about who she is, who she represents and the political agenda she has been promoting for years,” Kols said. It’s “pro-Russian, pro-Kremlin rhetoric aimed at undermining E.U. unity” and fragmenting NATO.

E.U. defenders view a potential Le Pen victory as an existential threat that could be more destructive to the bloc than Brexit.

She has dropped her long-standing calls to withdraw from the E.U. and the euro. But critics say she has merely exchanged those positions for a slower poison. Her proposals — including reinstituting border controls, offering preference to French nationals for certain benefits, placing French law above European law and slashing financial contributions to Brussels — fly in the face of the bloc’s principles and rules, and they could corrode the E.U. from within.

Observers see her quickly aligning with autocratic governments in Hungary and Poland in their efforts to defy the liberal democratic ideals at the E.U.’s core. She could also give momentum to far-right forces in Italy and Spain, which have begun to gain steam after periods of stagnation.

Enrico Letta, a former Italian prime minister and head of Italy’s Democratic Party, said in an interview that his first reaction to Le Pen’s surge of support in France was “fear.”

She remains the underdog, and he said he believes she will not win. “But should it happen, it would mark the end of Europe,” he said. “I don’t think the E.U. could survive that.”

In Spain, the far-right Vox party recently secured a co-governing arrangement in the province of Castilla y León, north of Madrid, while Italy faces an election next year in which far-right populists stand some chance of securing a ruling coalition.

“I do dread a domino effect, because it reminds me of what happened back in 2016 to 2018, with the election of Trump,” Letta continued. “I’m quite afraid that having Le Pen at the Élysée would have the same effect on populist and anti-European impulses that are already quite present [in European politics] and would get a very strong boost.”

Experts see Le Pen’s conciliatory position toward Moscow as complicating U.S. and European attempts to isolate Putin. Le Pen opposes plans to wean Europe off Russian oil and gas and could jeopardize the E.U. ban on Russian coal. Her stance could embolden the Kremlin by tying the bloc’s hands on any further measures against Russia, should Putin deploy even more inhumane war tactics in Ukraine.

In 2017, Le Pen’s campaign was partly funded through a loan from a Russian bank brokered by a Putin ally, according to French investigative outlet Mediapart. And, similar to Russian efforts to boost Trump, Moscow allegedly sought to help Le Pen’s presidential bid that year by leaking damaging material on her then and current rival — Emmanuel Macron.

For her current run, Le Pen’s campaign secured a loan from a Hungarian bank whose shareholders include business executives close to that country’s autocratic leader, Viktor Orban, who is widely seen as Putin’s strongest ally inside the E.U.

Since the war in Ukraine began, Le Pen has sought to inject nuance into her previous relations with Putin, suggesting she has “changed her opinion” of the Russian leader. She has portrayed her courting of the Kremlin as simply part of her efforts to put French interests first and prevent Moscow from falling into the arms of China.

But observers say her platform would nevertheless be a gift to Moscow.

“If she wins, Putin wins,” Letta said. “And European integration will lose, as it will stop and backpedal. And populist, anti-European ideals will take root in other European countries.”

Although trailing Macron in most polls, Le Pen has gained steady momentum, as the French grapple with inflation and slipping purchasing power — bread-and-butter issues that play to her strengths.

Q&A about the French presidential election

Her populist domestic agenda, observers say, could be reined in by Parliament, particularly if her allies do not fare well in June’s legislative elections. But traditionally, the French executive branch wields substantial power over foreign affairs — something that has much of the rest of Europe panicking.

In Germany, fears are running particularly high that a Le Pen victory would drive a wedge between Berlin and Paris — which together often determine the direction of European policy.

In a campaign speech last week, Le Pen showed no love for the relationship. She promised to end joint defense projects with Germany because of “irreconcilable strategic differences.” She criticized Germany’s rejection of nuclear power and said France would not support a German bid for a permanent seat on the U.N. Security Council.

“We must all now gather behind Emmanuel Macron,” tweeted Michael Roth, chair of the German parliament’s foreign affairs committee. “It’s him or the fall of a united Europe. Sounds dramatic. But it is.”

Le Pen’s election could lead to an “E.U. meltdown,” Reinhard Bütikofer, a veteran European Parliament member with Germany’s Greens, told the Der Tagesspiegel newspaper. “Without a France that wants to move the E.U. forward, it cannot function.”

In Brussels, the E.U.’s capital, European diplomats see Le Pen’s surge as a surreal replay of Trump’s victory and of Brexit, but this time in the heart of Europe.

Many are clinging to hope that she will lose, as she has twice before. “I just can’t believe they would vote for Putin’s stooge,” said one European diplomat who spoke on the condition of anonymity to speak freely.

Le Pen’s far-right platform, however, has created odd synergies with other parts of Europe, including Poland’s arch-conservative government, which has been fined by the E.U. for democratic backsliding. Warsaw is fiercely anti-Russian but has nevertheless seen Le Pen as a strategic ally in its fight with Brussels.

Macron, meanwhile, is widely viewed in central Europe as having courted the Kremlin over the years, as well as overplaying his hand during the run-up to the Ukraine invasion by seeking to personally assuage Putin in Moscow. This month, after Polish Prime Minister Mateusz Morawiecki likened Macron’s efforts with Putin to negotiating “with Hitler,” the notoriously blunt French leader retorted by dubbing Morawiecki “a far-right antisemite who bans LGBT people.”

“By attacking Macron at this moment, they are [effectively endorsing] Le Pen, contrary to Polish interests,” said Jacek Kucharczyk, head of the Warsaw-based Institute of Public Affairs. “Her election would be a disaster for Poland because it would weaken Western unity. It’s completely reckless and irresponsible [of the government] to use this as an opportunity to get back at the European Union. It’s ideological shortsightedness.”

Yet Latvia’s defense minister, Artis Pabriks, said the biggest loser in a Le Pen victory would be France.

“If she wins, France will be more sidelined in the European Union and NATO,” he said. “She might withdraw French troops from the Baltics. But, you know, if Marine Le Pen is the president of France, it may be good that they are not in the Baltics.”

Rauhala reported from Brussels and Pitrelli from Rome. Loveday Morris in Berlin contributed to this report.