EU ploughs ahead on sanctions as Putin annexes Ukrainian regions 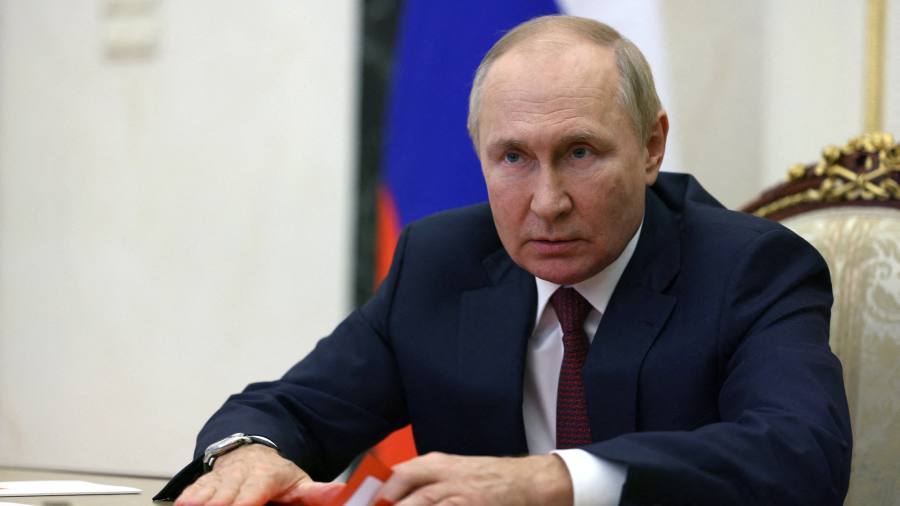 Vladimir Putin is set to annex the largest swath of territory in Europe since the second world war today at a ceremony in the Kremlin, when he signs “treaties” bringing four Ukrainian regions under Moscow’s control. We’ll look at the significance of this moment and the latest on the EU sanctions front in Brussels, where ambassadors are meeting today.

Also in Brussels, energy ministers will seek the lowest common denominator on a joint response to the gas and electricity costs crisis, as proposals for a gas price cap remain elusive.

And in anticipation of next week’s summit with non-EU countries in Prague, London confirmed that Prime Minister Liz Truss would be going — an apparent olive branch extended to France’s Emmanuel Macron, who came up with the idea of this new grouping on European security and energy matters.

The Russian president is doubling down on his faltering invasion of Ukraine — and sending a stark message to the west, write Max Seddon in Riga and Sam Fleming and Andy Bounds in Brussels.

Taking over the parts of Donetsk, Luhansk, Zaporizhzhia and Kherson regions that Russia controls does little to end the war.

Putin was forced to mobilise the army’s reserves, a deeply unpopular move he had put off for months, to bolster the 1,000km front line. Russia is now laying claim to large swaths of territory even as Ukraine’s armed forces have been successful in their counteroffensive.

The logic behind this latest land grab was laid bare when Putin vowed to retaliate against any future attempts to reclaim what he is now calling part of Russia.

He said that would include nuclear weapons, if necessary (“this is not a bluff”) — a threat aimed at persuading the west to stop its support for Ukraine.

In Brussels, ambassadors are meeting today to discuss an eighth round of sanctions as the EU seeks to respond to the latest Russian escalation.

The key element of the package is a price cap on seaborne shipments of Russian crude that has been agreed in principle by the G7 capitals. The aim of the cap is to drive down Putin’s oil revenues while ensuring that third countries can still gain access to Russian crude.

While diplomats want to agree the EU implementation of the measures before an informal summit of leaders next week in Prague, it will not be straightforward. A particular concern is Hungary, which reiterated yesterday that if there were energy sanctions involved it could not support the measures.

All this is true to form, given Prime Minister Viktor Orbán spent weeks resisting the EU ban on Russian crude oil imports in May — before winning a temporary exemption from the embargo on pipeline shipments.

Member states are already considering ways of bringing pressure to bear, if necessary. One option would be to impose tariffs on Russian oil being piped into the EU, given that these would hit Hungary right away.

A senior EU diplomat said: “Hungary of course has an exemption from the EU ban on Russian oil deliveries via pipeline. It would be 100 per cent possible to impose tariffs on Russian oil shipments into the EU using a qualified majority vote and hit Hungary if Orbán doesn’t play ball on the oil price cap.”

Another unresolved question is the level of the proposed cap, including the mechanism that will determine it. People familiar with the proposals expect it to be a dynamic cap that fluctuates alongside movements in global oil prices.

Several member states object to the European Commission’s ideas for setting the level, however. “The implementation measures being proposed are contentious, and could derail the whole thing,” said one diplomat. “They give too much power to the commission.”

Is the EU’s response to Vladimir Putin’s annexation of Ukrainian territories adequate? Tell us what you think and click here to take the poll.

Current and former officials in continental Europe are barely even trying to conceal their Schadenfreude over the market turmoil that has greeted Liz Truss’s plan to fund £45bn of tax cuts by increasing debt, writes Martin Arnold in Frankfurt.

Myriad briefings, a flurry of papers and two bust pipelines have characterised the run-up to the second emergency meeting of EU energy ministers this month, writes Alice Hancock in Brussels.

Today’s council should rubber-stamp a plan to introduce windfall levies on non-gas power generators and fossil fuel companies and a cut to peak electricity consumption of 5 per cent.

The latest revision of the proposals shows that as well as adding a tax on electricity grid operators, Malta and Cyprus have been granted a carve-out from the reduction of electricity demand and non-gas power generators levy, while member states such as Sweden whose laws forbid the implementation of retroactive taxes will be allowed to apply the “solidarity contribution” on oil and gas majors in 2023 rather than 2022.

Also on the agenda is a tentative proposal by the European Commission to cap the price of gas — though whether that is Russian gas, piped gas or liquefied natural gas that arrives to the EU on ships is all up for grabs. One EU energy minister described the paper circulated by Brussels technocrats as “really unsatisfactory”.

Commission officials have said that a plan set out by Greece, Poland, Italy and Belgium to cap the price of all wholesale gas raised more problems than it solved. Brussels has been against such a move on the basis of security-of-supply concerns. The member states involved, however, have dismissed those on the basis that 70 per cent of EU gas demand is domestic or comes from piped gas that cannot be sent anywhere else.

To add to the ministers’ workload, a discussion on the apparent sabotage of the Nord Stream 1 and 2 pipelines in the Baltic Sea has been added to the agenda.

Now bubbling methane gas leaking at huge volumes into the atmosphere and the damage to the pipelines are both a security issue and a considerable environmental hazard.

What to watch today

Trade Secrets — A must-read on the changing face of international trade and globalisation. Sign up here

Are you enjoying Europe Express? Sign up here to have it delivered straight to your inbox every workday at 7am CET and on Saturdays at noon CET. Do tell us what you think, we love to hear from you: europe.express@ft.com. Keep up with the latest European stories @FT Europe

Celine Dion reveals she has a rare neurological syndrome