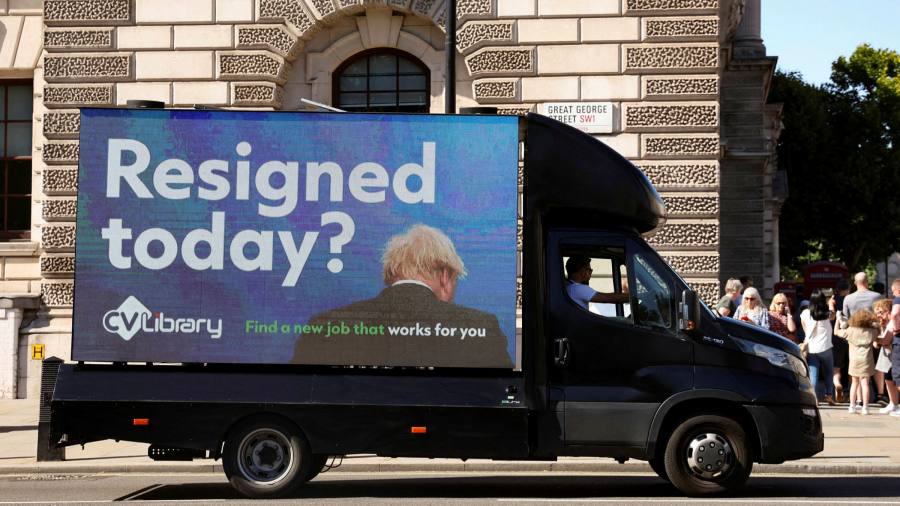 Boris Johnson’s departure from office will have less international impact — particularly on Britain’s relations with the EU — than his arrival as the prime minister who claimed he would “get Brexit done”, diplomats say.

In theory, his exit offers the chance for a reset in fractious bilateral relations between the UK and EU. But most in Brussels believe his successor will continue with plans to unilaterally amend the post-Brexit trade deal he signed.

“We are by no means jumping for joy,” said an EU official. “It doesn’t look as if another candidate would change course drastically in their attitude.”

Several diplomats questioned whether any contender for the Conservative leadership would dare to discontinue a policy popular with the MPs whose support they must win. “Even though Johnson is gone, it’s the same party with the same backbenchers,” said one diplomat.

Most European capitals, especially Paris, had lost trust in Johnson despite his claim for credit in his resignation speech for “settling our relations with the continent”.

He agreed an exit deal with the EU that sowed the seeds of discord. Johnson wanted the UK to be free to diverge from EU rules and sign trade deals with other countries. That meant keeping Northern Ireland in the EU single market for goods while Great Britain left. Doing so avoided a trade border on the island of Ireland but required one in the Irish Sea, which angered Northern Ireland unionists.

In June, Johnson’s government proposed legislation that would override much of that arrangement.

The betrayal poisoned the atmosphere with Brussels. “We signed with the same people. We negotiated with these people and they signed the agreement. Now they are trying to undo what [they] said was a good deal,” said one official involved in the original Brexit deal.

Pascal Lamy, a former French commissioner, told the FT: “What we can expect is a change of style — a more boring style of politics and no more fireworks. There is no one else like him in British politics. That would allow us to focus on the boring and highly technical task of agreeing how to administer the Northern Ireland border. A return to calm is a prerequisite to a more normal relationship.”

Micheál Martin, prime minister of Ireland, said: “We have now an opportunity to return to the true spirit of partnership and mutual respect.”

A thaw in Anglo-French relations also seemed illusory. On Wednesday, British officials were talking about plans for a formal bilateral summit between Johnson and French president Emmanuel Macron — the first since a meeting between Macron and Theresa May in January 2018.

But the French have been noticeably less enthusiastic about the so-called “bromance” that Downing Street said had developed between the two leaders at the recent G7 summit in Germany. “It’s not possible to go on like this,” said one French official this week.

On the other big international issue of recent months — war in Ukraine — Johnson’s announced departure was lamented in Kyiv. Ukraine saw Johnson as a staunch supporter of their resistance to Russia’s invasion and expects him to be replaced by someone equally keen to send arms.

“We have no doubt that Great Britain’s support will be preserved, but your personal leadership and charisma made it special,” Ukrainian president Volodymyr Zelenskyy said.

In Moscow, though, Johnson’s exit was predictably mocked. “Boris Johnson was hit by a boomerang launched by himself,” said Maria Zakharova, Russia’s foreign ministry spokesperson. “His comrades-in-arms turned him in.”

The UK’s stance on Northern Ireland and Johnson’s ties to ex-President Donald Trump have also damaged relations with Washington under Joe Biden. The state department and many members of Congress have repeatedly urged Johnson to negotiate over the protocol.

“I look forward to continuing our close co-operation with the government of the United Kingdom,” Biden said in a White House statement that did not mention Johnson by name.