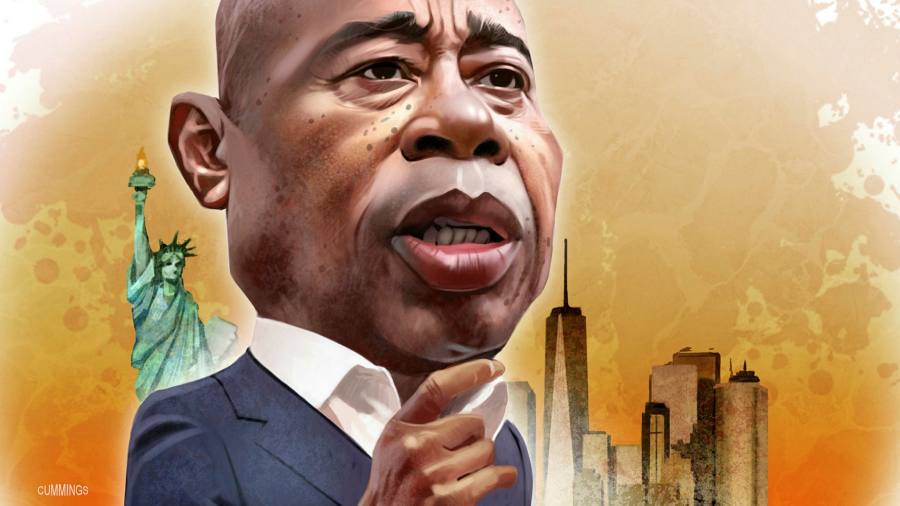 It was a quintessentially New York nightmare. At the height of the Tuesday morning commute a mumbling madman riding a subway train in Brooklyn donned a gas mask, detonated two smoke grenades and then fired 33 shots from a semi-automatic pistol at fellow passengers.

Ten were wounded. The city was traumatised. But Eric Adams, the former policeman elected mayor in November, could not visit the crime scene to offer reassurance because he was stricken with Covid-19 and in quarantine.

By Wednesday afternoon, Frank James, a 62-year-old man with a history of prior arrests and unhinged social media rants, was in custody. Adams, speaking to citizens by video, appeared exultant. “My fellow New Yorkers, we got him,” he declared. “We got him.”

That policing triumph was slightly diminished by the subsequent disclosure that James himself had called a tip line and alerted police to his location near a McDonald’s in the East Village.

In its particulars, the episode was a reminder of the interwoven plagues — a pandemic, a surge of gun violence and untreated mental illness — afflicting America’s largest city and posing an epic challenge for its new mayor.

“This is a Herculean task,” said Norman Siegel, a civil liberties lawyer and longtime friend of Adams. “I think he’s up for it but there’s a lot of stuff that’s come at him in his first 104 days.”

Adams is the city’s second black but arguably its first blue-collar mayor, a man from the outer boroughs who represents the bus drivers, doormen and other working folk who make New York tick. Yet he has also won the allegiance of Manhattan’s executive kings with the mantra that “public safety is the prerequisite to prosperity”.

He is a sui generis character: a veteran police officer and arch police critic; a fastidious vegan with an insatiable appetite for the city’s nightlife. During the campaign, some questioned whether he was even a New Yorker, since he kept a residence across the river in New Jersey and claimed to sleep in his office.

Early in his tenure, the smiling and exuberant Adams has displayed an unabashed zest for a city desperate to regain its mojo, and which his predecessor, the lethargic Bill de Blasio, either lacked or withheld. But there have been questionable judgments, like the appointment of his brother to a top security post.

The overriding question is whether Adams can arrest New York’s slide towards senseless violence and decay that has some residents invoking the “bad old days” of the 1970s and 1980s, when murders approached 2,000 a year, the Bronx burnt and the city lost 10 per cent of its population in a decade.

With 488 murders last year, New York is still far from that. But shootings are up 8 per cent so far this year, and 72 per cent from two years ago. These numbers do not capture the horror of people shoved on to subway tracks by the deranged, or having faeces smeared in their faces, as happened to a woman awaiting a train in February.

“Even if ‘America’s Mayor’ Rudy came back, it would be too heavy of a lift for him,” said Ken Frydman, who was Rudy Giuliani’s communications director in his first mayoral campaign.

“I’ve been in New York City for nearly 50 years and I don’t remember anything like this,” a stunned Kathryn Wylde, president of the Partnership for New York City, an executive group, said after Tuesday’s attack. Fear of the subway, not Covid, was now the biggest obstacle to persuading workers to return to Manhattan offices, she said.

Adams knows the city’s darkness. He was born in Brownsville, one of its poorest neighbourhoods. His mother cleaned houses. As a teenager, he and his brother were arrested for a theft they said they did not commit, then beaten by police in a precinct basement. Swept up in the rage of the era, he was guided in an unusual direction by a fiery Brooklyn preacher — into the police academy.

“It wasn’t easy to persuade anybody to join the police force, especially young people,” the Reverend Herbert Daughtry, 91, recalled in an interview. “But at the same time, if you’re really trying to change things, you have to work from within.” Daughtry described the young Adams as “precocious”.

Once inside the club, Adams loudly criticised its abuses and founded a group, 100 Blacks in Law Enforcement Who Care, whose very name was a slap at the institution. To this day, Adams has an awkward relationship with the police. His former union endorsed tech entrepreneur Andrew Yang in the mayor’s race.

Still, Adams prevailed by persuading a broad coalition of voters, from working-class blacks to wealthy developers, that he was uniquely equipped to contain crime without resorting to the heavy-handed tactics of the past. He gained national stature as a centrist Democrat rebutting progressive calls to “defund the police”.

Even with Covid, a coughing Adams kept up a torrid pace of media appearances this week, casting his city’s violence as a national problem caused by lax federal gun laws and an American “cult of death”. He has tried, so far with little success, to prod state legislators to roll back recent criminal justice reforms that made it more difficult to detain suspects awaiting trial.

Richard Aborn, head of the non-profit Citizens Crime Commission, applauds Adams’ approach of more aggressive but precise policing aimed at removing guns from the streets. But he acknowledged it may be months before it shows results. In its own lurid way, the image of a smirking, disheveled James as he was led away by police on Wednesday seemed to say the same thing.