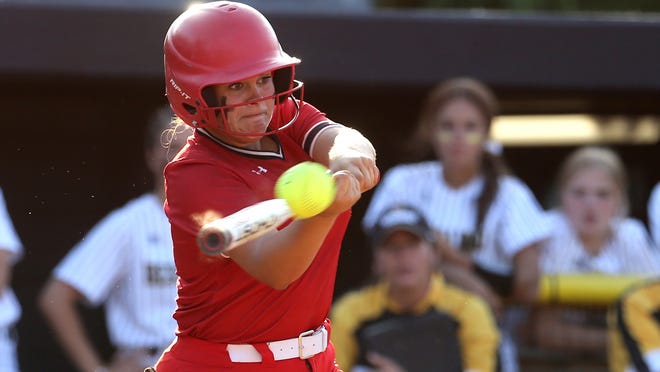 HATTIESBURG — East Webster softball coach John Harris was confident his Wolverines would close out Lake in Game 2 of the MHSAA Class 2A championship on Friday.

East Webster (29-5) learned  a lesson about complacency in the semifinals against East Union. The Wolverines had won 18 consecutive games heading into Game 2 of the semifinals — including a 6-4 victory in Game 1.

“We were up 1-0 on East Union and thought they were going to roll over,” Harris said. “Obviously, they were a good team and didn’t roll over and punched us in the mouth. We didn’t want that again.”

MHSAA CLASS 1 CHAMPIONSHIP:How Taylorsville responded from a Game 1 loss to claim the 1A title

The Urchins dominated Game 2 and won 6-1. It was the first time East Webster scored less than three runs since a 3-1 loss to Caledonia on Feb. 24. The Wolverines rebounded from that defeat with a 9-5 victory in Game 3 as the loss prepared them for the championship series. The 2022 title is the program’s first since 2015

East Webster defeated Lake — the defending state champion — 14-1 on Wednesday. The Wolverines finished the series with an 11-1 victory in five innings Friday at the Southern Miss Softball Complex.

“We came into that game too confident and losing to them really is what we needed before this,” sophomore Emma Jennings said. “Even though we beat (Lake) in the first game, we needed to come out strong in the second game, because we know what happened against East Union.”

East Union capitalized off three errors in the first inning to take a 5-0 lead and never looked back. The Wolverines added another four runs in the second behind a single from Emma McKee, followed by a two-run single from Addison Edwards.

East Union had six players with multiple hits and seven registered an RBI.

“They bought into the little things in the beginning,” Harris said. “Your ceiling at the end of the year is higher when you have fundamentals and progress throughout the year. You know what adjustments to make when you screw up and keep fighting.”

Peyton Flora and Jennings both went 3-for-3 to lead the Wolverines. Jennings doubled to left field in the third to extend the East Webster lead to 11-0.

“Our defense is definitely our strong point,” Flora said. “That’s what we focus on the most: our pitching defense.

“But we’ve really worked hard these past few months to get our bats rolling because we knew that when we got to this moment, we wouldn’t beat every team by a lot of runs. We had to get the bats going (or) it would be really close games.”

Pitcher Liz Massey was dominant in both games. The senior held the Hornets to seven hits and one run with three strikeouts in Game 1. Massey followed that with five strikeouts and held Lake to four hits in Game 2.

“It’s good seeing a group of girls that do things the right way day in and day out (win),” Harris said. “You’ve got a team like that with example after example of them doing it the right way.”