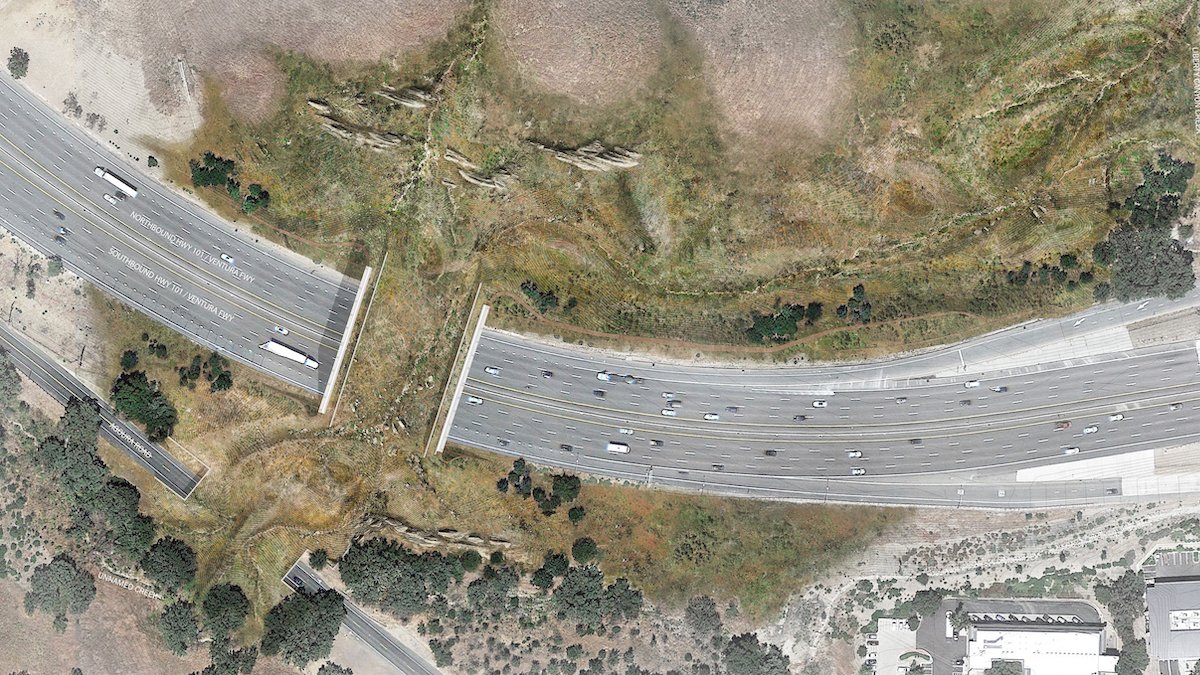 Groundbreaking is scheduled for Friday on a wildlife crossing over one of the country’s busiest freeways.

The wildlife bridge over the 101 Freeway northwest of Los Angeles is designed to provide more room to roam for mountain lions and other animals hemmed in by urban sprawl.

A ceremony marking the start of construction is scheduled for 10 a.m. on Earth Day.

The roughly $85 million Wallis Annenberg Wildlife Crossing is will span 210 feet
over 10 lanes of highway and pavement. It is also the first such crossing to be significantly funded through private donations along with public support.

The bridge will give mountain lions, coyotes, deer, lizards, snakes and other creatures a safe route to open space in the Santa Monica Mountains and better access to food and potential mates, said the wildlife federation’s Beth Pratt.

The crossing are nothing new, but what makes this one different is that it will be over one of the busiest freeways in the country. The bridge will be the first of its kind near a major metropolis and the largest in the world, stretching 200 feet above 10 highway lanes and a feeder road just 35 miles northwest of downtown LA.

Construction will take place mostly at night and won’t require any lengthy shutdowns of the 101 freeway, officials have said. It’s to be completed by early 2025.

The $90 million price tag will be covered by about 60% private donations, with the rest coming from public funds set aside for conservation purposes. The span will be named the Wallis Annenberg Wildlife Crossing, for the philanthropist whose foundation donated $25 million.

The star of the fundraising campaign was the mountain lion P-22. Famous for traveling across two freeways and making a huge Los Angeles park his home, the big cat became a symbol of the shrinking genetic diversity of wild animals that must remain all but trapped by sprawling development or risk becoming roadkill.

Sadly, the start of construction comes a day after a young mountain lion was struck and killed by a vehicle on the 405 Freeway in Brentwood.

“This week was supposed to be one of celebration as we mark the groundbreaking of a wildlife bridge in Agoura Hills. Instead, we’re saddened by the violent death of yet another mountain lion,” said J.P. Rose, a senior attorney at the Center for Biological Diversity. “These tragedies are preventable if California invested in more wildlife crossings, which protect both wildlife and people from dangerous collisions. I hope our leaders in Sacramento take a serious look at the Safe Roads and Wildlife Protection Act, a sensible piece of legislation that will bring more wildlife crossings to the state.”

The mountain lion’s death Thursday in the Brentwood area was the second in less than a month. Another lion was killed by a vehicle on Pacific Coast Highway in Malibu on March 23.

Scientists tracking cougars fitted with GPS collars found over decades that roadways are largely confining animals in mountains that run along the Malibu coast and across the middle of LA to Griffith Park, where P-22 settled.

Despite being the face of the project, P-22 is unlikely to use the bridge because he’s confined to the park many miles away. But many of his relatives could benefit, Pratt said.

Some 300,000 cars a day travel that stretch of the 101 in Agoura Hills, a small city surrounded by a patchwork of protected wildland that the new crossing will connect.

Drivers in the Liberty Canyon area will speed under the bridge 165 feet (50 meters) wide with brush and trees growing on top, seamlessly joining hillsides on both sides of the lanes.

Architects designed the topography to be indistinguishable from the scenery on either side. Berms and hollows with high edges will block sound and light from the lanes below.

Wildlife crossings — bridges and tunnels — are common in western Europe and Canada. A famous one in Banff National Park in Alberta spans the Trans-Canada Highway and is frequently used by bears, moose and elk.

The Los Angeles-area bridge has enjoyed nearly universal support, unusual for a public works project. The draft environmental impact document received nearly 9,000 comments — with only 15 opposed, according to the wildlife federation.