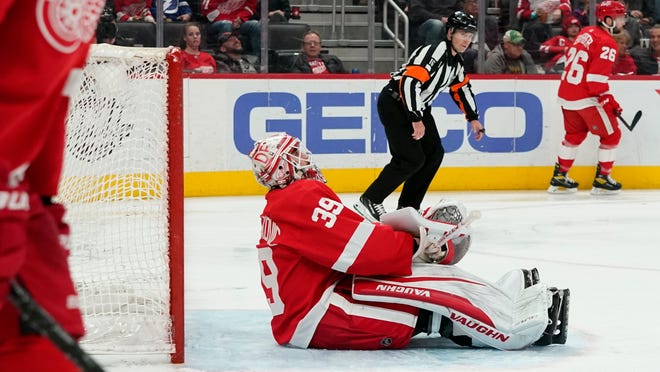 Detroit — Cats are notorious for playing with their food before they eat it.

And that’s exactly what the Florida Panthers did to the Detroit Red Wings on Sunday at Little Caesars Arena, playing to a scoreless tie during the opening 25 minutes before pouncing to the tune of four second-period goals in a span of 9:49.

Florida rookie Anton Lundell scored twice in the game (once short-handed), Sam Reinhart had a goal and an assist and Anthony Duclair, Maxim Mamin and Gustav Forsling each added goals for the Panthers (54-15-6), who’d go on to take the game, 6-1.

“It’s deflating every time they score,” Red Wings captain Dylan Larkin said. “But I think after the second, third…there was a quietness on our bench. It seemed like (the Panthers) started to wake up and start moving around offensively, and we just didn’t do enough to stop them.”

Pius Suter scored the lone goal for Detroit at 12:04 in the third period. That stopped the Red Wings’ scoreless streak just 1:29 short of reaching a full 120 minutes, going back to Thursday’s win at Carolina.

Still, Detroit (29-37-10) looked like a much different team than the one that showed up at Madison Square Garden on Saturday and fell 4-0 to the Rangers. Even after the disastrous second period on Sunday, they trailed only 29-25 in shots.

The difference? Florida made good on its chances, while the Red Wings hit posts, blew shots wide of an open net and overall couldn’t finish the opportunities they created on the offensive end.

“Those are huge momentum swings,” Red Wings coach Jeff Blashill said. “It takes the energy out of the building. Had we been able to score on some of our chances, you get some energy in the building … and then obviously it’s a huge energy-draining on the short-handed goal. If you score there, you’re in the game and you get the chance to at least make it interesting.”

Some examples: Moritz Seider in the first period defended a pass to Jonathan Huberdeau at the net-front, a perfect redirect that sprung Larkin for a breakaway try. It rang off iron. Larkin also dangled through the Florida defense to get a shot off that was saved by a diving Spencer Knight, then fed Adam Erne for a net-front chance that turned into a great rebound opportunity.

But when the going got tough on Sunday, it was the stoic Panthers who got going.

“When you’ve had the stretch we’ve had over the last basically two months, you’re more apt for those (swings) to affect you,” Blashill said. “But you gotta find a way to be mentally tough. One of the biggest factors in teams having success in this league is mental toughness.”

The Red Wings now have six games remaining in their season, and the competition isn’t about to get any easier. Detroit plays at Tampa Bay and Florida and returns home against Pittsburgh before facing New Jersey twice and Toronto once in the final stretch.

Asked if there was enough urgency in proving themselves before the season ends, Larkin said, “At times, yes. Other times, no.”

“We’re running out of runway, and we have to end the season here on a positive note. We have tough competition, but we have two weeks to figure something out.”

Detroit started the second period with a power play and controlled play during the opening minutes. Duclair reversed the momentum by beating Alex Nedeljkovic (33 saves) five-hole with a one-timer feed from Aleksander Barkov at 5:02.

Just one minute, 30 seconds later, Mason Marchment won a puck battle against Seider on the rush and delivered a one-time feed to the slot for Reinhart, who beat Nedeljkovic high, glove-side for the 2-0 lead.

On the third goal (14:23), Lundell slammed home a rebound generated by the Panthers pickpocketing Jake Walman below the goal line, and on the fourth (14:51), Eetu Luostarinen sauced a pass over a sprawling Filip Hronek on a 2-on-1 for Mamin, who put it home with a backhand.

If there had been any doubt that the Panthers didn’t have the game in the bag when coming out for the third, a short-handed goal by Lundell at 5:04 surely did the trick.

Suter spoiled the shutout for Knight (33 saves) at 12:04 in the third. Forsling got it right back for the Panthers just one minute, 10 seconds later.

Nolan Bianchi is a freelance writer.