While scrolling on social media, Aaron saw an ad for what appeared to be a gig for one of his favorite bands, the Red Hot Chili Peppers. He couldn’t believe his luck. The band was performing on Thursday, April 28 at Ferndale’s small Magic Bag venue, and tickets were under $20.

It wasn’t completely far-fetched. The longstanding Los Angeles-based rock band recently dropped its 12th studio album, Unlimited Love, and has been promoting it with surprise shows in L.A. at smaller venues like the Fonda Theatre and Amoeba Music. Plus, frontman Anthony Kiedis is from Grand Rapids and drummer Chad Smith grew up in Bloomfield Hills.

“The way they were promoting the record that just came out, they were doing smaller venues out west, doing little record stores, free shows, things like that,” says Aaron, who asked that we use his first name only. “I was like, oh my god, maybe I’m lucky.” He immediately bought four tickets.

But it wasn’t until he received a confirmation email that he realized he made an error. The band was actually Red NOT Chili Peppers, a Red Hot Chili Peppers cover band.

“It’s like the same spelling, just one letter,” says Aaron, who added that he didn’t notice it in the ad’s graphic, where the band name was rendered in all caps. 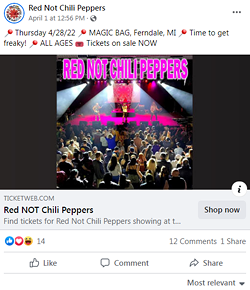 “It’s like the same spelling, just one letter,” says Aaron, who added that he didn’t notice it in the ad’s graphic, where the band name was rendered in all caps.

According to the band’s website, the Red NOT Chili Peppers “pay tribute to the ultimate funk rock quartet — a band who has transcended three decades of chart-topping success as well as developed one of the largest die-hard fanbases in the world.”

While the Red Hot Chili Peppers are coming through Detroit on its current tour, they’re performing on Sunday, Aug. 14 at the much, much, much larger Comerica Park stadium along with the Strokes and Thundercat. Tickets are still available and range from $95 to $136.

The Magic Bag has kind of a reputation for booking cover bands — Detroit-based acts including a Smiths tribute called the Smiths United and a Cure tribute called Re-Cure frequently perform there, as does the excellently named all-women New York-based Led Zeppelin cover band Lez Zeppelin.

Still, Aaron, who clarifies that he was “completely sober when I bought these tickets,” says, “It’s kind of like slick advertising, basically.”

A rep from the Magic Bag could not be reached for comment.

He says that since he’s such a big fan, he might go see the cover band anyway.

Mike Tyson takes a bite out of the cannabis industry and a giant bear slide is coming to Detroit: The top 10 Metro Times headlines of the week | ICYMI | Detroit