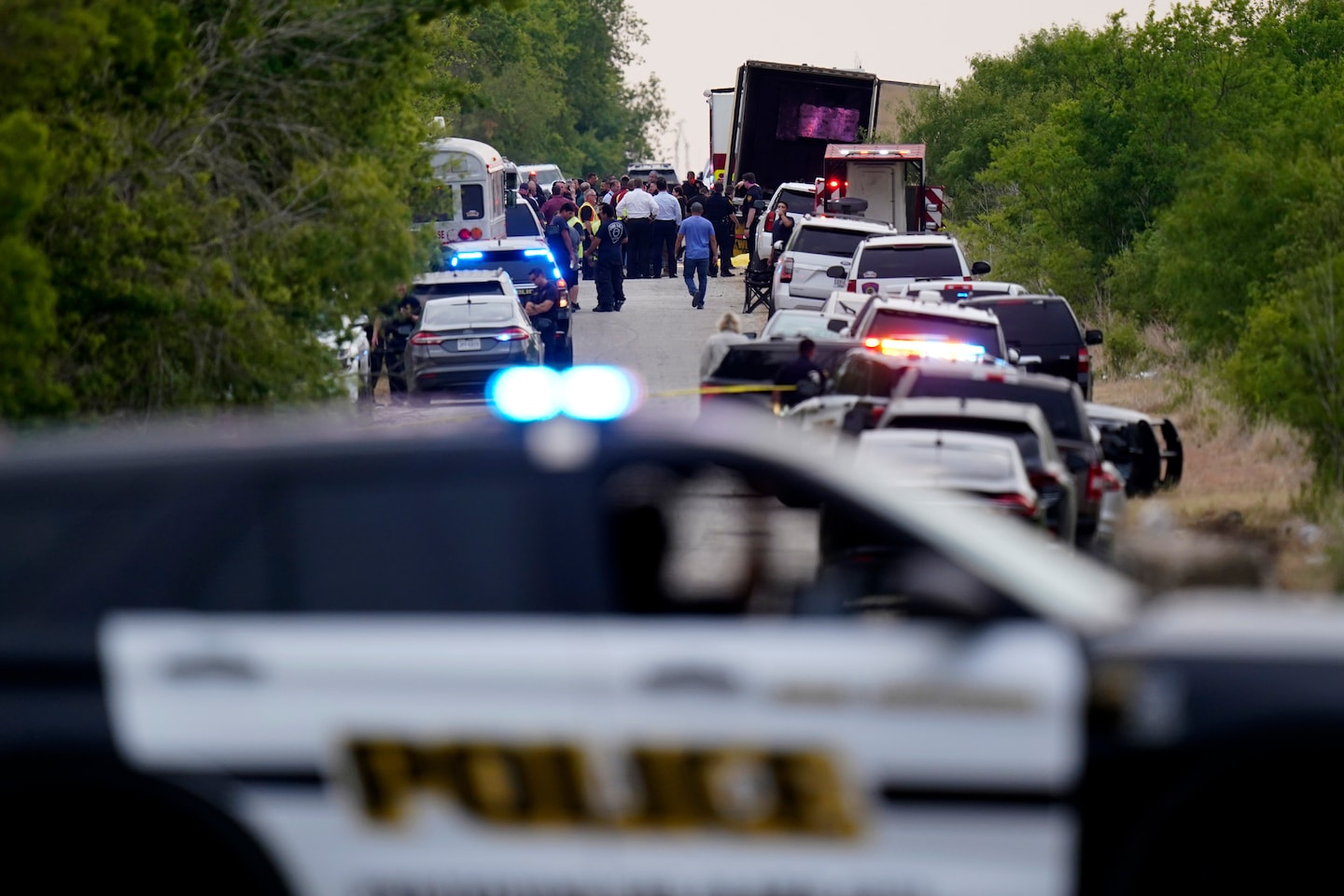 The number of migrants dead in a suspected smuggling operation rose to 50 on Tuesday, the Mexican consulate reported, a day after dozens of bodies were found lifeless in the back of a sweltering tractor-trailer in San Antonio.

Roberto Velasco Álvarez, head of North American mission for the Mexican government, wrote on Twitter that 22 of the victims were Mexican nationals, seven were originally from Guatemala and at least two were Honduran. There are 19 individuals for whom no nationality has been determined.

Álvarez was one of several government officials at the scene where law enforcement made the gruesome discovery Monday. Smuggling organizations regularly pack together scores of people who pay thousands of dollars to be snuck past highway checkpoints across South Texas. In recent years, there have been several deadly human trafficking incidents on U.S. soil — but the death toll in Monday’s tragedy surpassed all those events.

San Antonio Fire Chief Charles Hood said Monday that 16 people from the truck were alive, including four teenagers, and have been transported to various hospitals in the region. Five patients were taken to Baptist Medical Center, where two later died, a spokesperson said. Three remain in critical condition. A University Health Systems representative said the hospital received two patients, a 23-year-old woman in serious condition and an adolescent in critical condition.

Temperatures in San Antonio have been in the triple-digit range for weeks and inside the refrigerated trailer there was no air conditioning unit or water located. Similar fatal cases showed temperatures under such conditions could rise to above 173 degrees inside the trailer.

Police Chief William McManus said three people were in custody but their alleged connection to the smuggling attempt is not yet clear. Homeland Security Investigations, a branch of U.S. Immigration and Customs Enforcement that specializes in human trafficking cases, has taken command of the investigation, authorities said.

McManus said it’s possible some people may have escaped before officers arrived and they will search early Tuesday for any other survivors. At least one person was found dead about 20 yards from the truck doors where they apparently collapsed.

Guatemala’s President Alejandro Giammattei described the tragedy as “unforgiveable” in a tweet. He called for hardening the penalties, including extradition to the United States, against those involved in human trafficking and smuggling across Latin America. Officials said at least two of the adolescent survivors are Guatemalan nationals.

The deaths come amid a surge in migration at the border, with the latest U.S. Customs and Border Protection figures showing that immigration arrests there in May rose to the highest levels ever recorded. CBP made 239,416 arrests along the border last month, a 2 percent increase from April, according to the totals.

The agency is on pace to surpass the record 1.73 million border arrests tallied in 2021 — presenting an ongoing logistical and political challenge for the Biden administration.

With the increase, smuggling attempts are also rising as more and more people from across the Western Hemisphere and beyond seek to bypass restrictive border policies at the U.S.-Mexico border and in the Caribbean. Millions of desperate families and adults have boarded boats across dangerous waterways, followed smugglers known as “coyotes” into the punishing desert, traversed rugged, wild mountains and risked drowning in the Rio Grande.

Earlier this month, a 24-year-old South Texas man pleaded guilty to a February smuggling attempt of 73 people — from Ecuador, Guatemala, Honduras, Peru, Mexico and El Salvador — while driving an 18-wheeler. All were in the country illegally, according to federal investigators.

U.S. Border Patrol agents are finding increasing numbers of people dead in ranches, desert and brushland across South and West Texas after being left behind by smugglers, injured or falling behind their group. Small town sheriffs across the Southwest are spending much of their time responding to 911 calls from migrants in distress across a vast wilderness, only to find their decomposing bodies days or hours later.

“It’s a lot of strain for us to be doing all this type of work, it’s unbelievable,” said Maverick County Sheriff Tom Schmerber, whose deputies found six dead, two women drowned in the river and four men on a remote ranch Monday. So far, 150 people were found dead in the Del Rio sector alone. Sometimes, all they find are bones.

“And we’ve still got six months left,” he said. “It’s hard on my deputies.”

Immigration advocates say federal border policies are pushing people to make extreme choices and put their lives in the hands of criminals. The border has been closed to most asylum-seekers since March 2020, giving families seeking protection few other options for entering the country to make their claims.

Until now, the deadliest human smuggling event on U.S. soil came on May 13, 2003, when 19 migrants died after riding in the rear compartment of an 18-wheeler in South Texas. Truck driver Tyrone Williams had agreed to smuggle the migrants across a border checkpoint for $7,500, but he failed to turn on the truck’s cooling system and temperatures inside soared to 173 degrees.

Migrants clawed at the insulation and screamed for help, and when he finally opened the doors in Victoria, Tex., the migrants were found dead of dehydration, overheating and suffocation. Williams was sentenced to 34 years in prison.

On July 23, 2017, 10 migrants died after being smuggled in a tractor-trailer to the parking lot of a Walmart in San Antonio. The driver, James Matthew Bradley Jr., pleaded guilty to charges related to their deaths. Eight migrants died in the trailer and two died at a hospital.

Thirty-nine migrants were found at the scene, but officials said as many as 200 may have been on the trip. Bradley was given a life sentence.

His co-defendant, Pedro Silva Segura, pleaded guilty to one count of conspiracy to transport aliens resulting in death and was sentenced to 108 months in prison and five years of supervised release.

Authorities in San Antonio said they were alerted to the scene after a worker in a nearby building heard a cry for help and went to investigate.

The trailer door was ajar when law enforcement arrived but those inside were too weak to get themselves out, Hood said. Police did not say what language people were speaking, and the victims were moaning when emergency personnel arrived.

The truck had U.S. and Texas Department of Transportation registration numbers on the cab. State records indicate a man in Alamo, Tex., is associated with those numbers — but his son-in-law, Isaac Limon, said that whoever ran the smuggling operation fraudulently printed those figures on the truck.

Limon said the truck that corresponds with that registration is a Volvo that has been hauling grain for the past week in another part of Texas. He added that his shaken-up father-in-law was standing next to him as he spoke by phone to The Washington Post.

“It was a perfect setup,” Limon said. “The truck is here. I’m looking at it right now. Sad to say, but he’s a bit of a victim, too, because people believe it was him.”